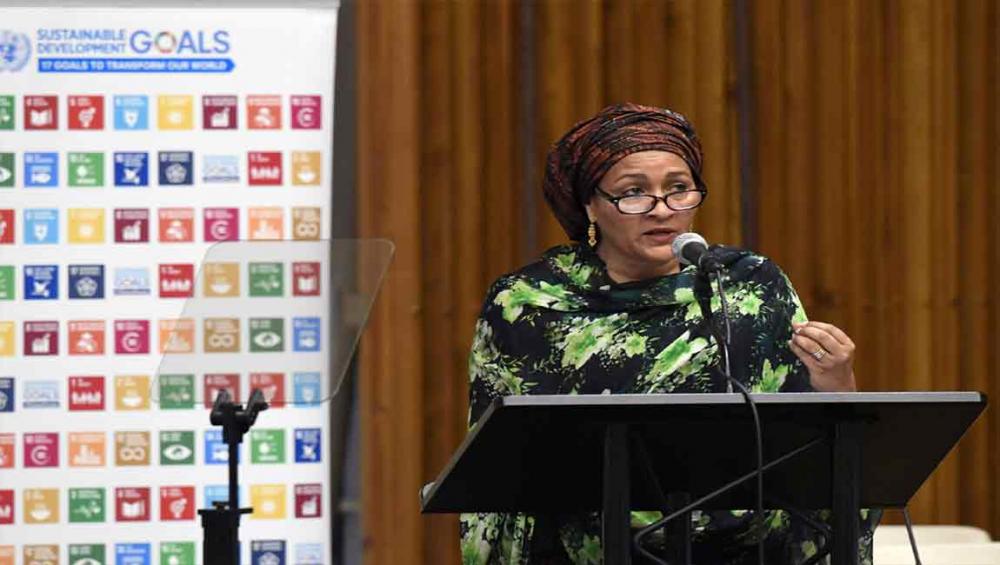 Speaking on 25 November, which is marked annually as the International Day for the Elimination of Violence against women, the Deputy Secretary-General issued a call to action for the international community “to invest in the missing 50 per cent of our human asset base, the potential of our women and unleash their power for good.”

“Just as the world came together to support the end of subjugation on the basis of race in this great country, we need today to birth a new movement that calls for true equality, everywhere,” she urged.

Mohammed noted that violence against women in homes and war zones is “a global pandemic”. Additionally, fewer than one-third of senior management positions in the private sector are held by women, and less than 25 per cent of all parliamentarians are women.

She said the new narrative must address the current context and constituency of young people left behind.

She discussed an unplanned meeting between Ekhlas Bajoo, a Yazidi woman who had been captured and held by the Islamic State (ISIL or Daesh) and Hauwa Mohammed, victimised by Boko Haram, who embraced and exchanged messages of hope.

“I left that day, knowing that there is nothing more important than giving girls like this a platform to reach the world for those left behind without an authentic voice,” Mohammed said.

“Nelson Mandela had a very long walk to freedom,” Mohammed said. “Most of us could not even fathom this journey. At the end, he said he 'discovered the secret that after climbing a great hill, one only finds there are many more hills to climb'. Leadership at all levels is the key.”

She also paid tribute to other South African leaders, including the head of UN Women, Phumzile Mlambo-Ngcuka, and Navi Pillay, former High Commissioner for Human Rights.

Mohammed, who as Deputy to Secretary-General António Guterres is the highest-ranking woman at the UN, said that Mandela's profound legacy contains the inspiration needed to address gender equality, which is putting people at the centre to reduce inequality through inclusion and sustainability.

In a speech peppered with personal anecdotes of growing up bi-racial in Nigeria at a time of apartheid in South Africa, Mohammed noted that she had never met Mandela, or Madiba as he is affectionately known, and so represents generations of people who take inspiration from his life without a personal encounter.

Before the speech, Mohammed toured the office and archives at the Nelson Mandela Foundation, reading Madiba's own writing, and had a personal tour of Robben Island, where he had been imprisoned.

Earlier, at a press briefing in Johannesburg, Mohammed said that tackling gender-based violence begins in the home and in communities.

"While progress has been made, a lot more needs to be done," she told the journalists.

She is scheduled tomorrow to visit to the nearby township of Khayelitsha, which is an historically important area where poverty remains high today.