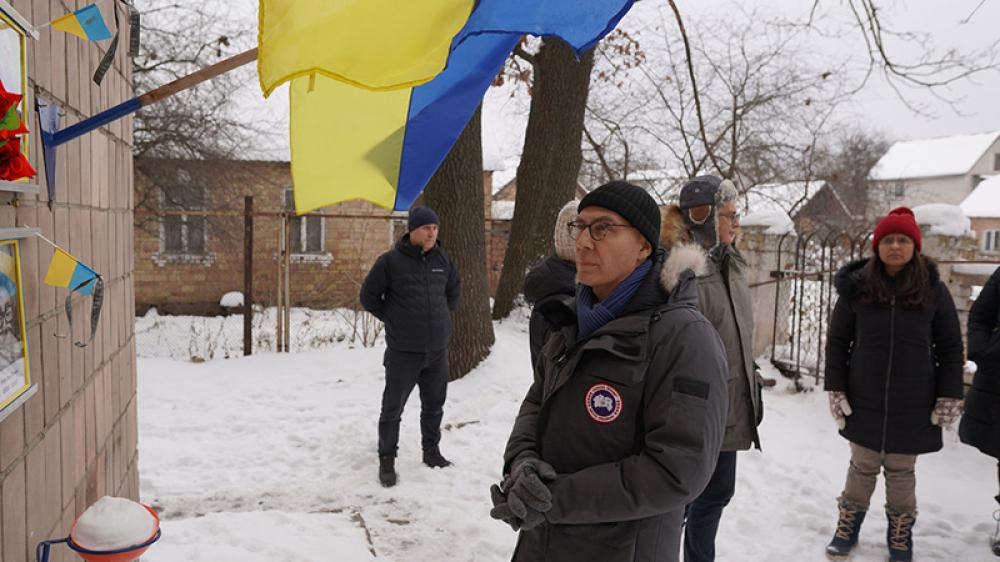 New York: The suffering being experienced by millions of civilians across Ukraine must not become the new normal, the UN human rights chief said on Wednesday.

Speaking in the capital, Kyiv, after an official four-day visit to the country, Volker Türk said that the scale of the damage and destruction that he had seen in Izium was “shocking”.

In Bucha, north of Kyiv, where scenes showing civilians lying dead in the street sparked international outrage soon after the departure from the area of Russian forces in March, Mr. Turk said that people’s trauma “remains palpable”.

He added that he feared for all those caught up in the “long, bleak winter ahead”, while also confirming that the consequences of the war on human rights in Ukraine had been devastating.

“The prognosis is very worrying,” the UN High Commissioner for Human Rights said, adding that his Office has continued to receive information about war crimes “each day”.

The High Commissioner’s visit coincides with the release of a new report into the killings of civilians by the UN Human Rights Monitoring Mission in Ukraine.

The report is expected to document the fate of 441 civilians in parts of three northern regions – Kyiv, Chernihiv and Sumy – that were under Russian control until early April.

The UN Human Rights Monitoring Mission in Ukraine is also working to corroborate allegations of additional killings in these regions, and in parts of Kharkiv and Kherson regions that were recently retaken by Ukrainian forces, Mr. Türk said.

Some were killed “cutting firewood or buying groceries”, the UN rights chief noted, adding that there were “strong indications that the summary executions documented in the report, constitute the war crime of willful killing”.

On the issue of prisoners of war, the UN rights chief insisted that they must be treated humanely “at all times”. International law allows for their prosecution only if they are suspected of war crimes, he continued.

He added that a third of the population has been forced to flee their homes, 7.9 million have left the country - the majority, women and children - and 6.5 million people are internally displaced.

“Let me stress that the most effective way to stop the running catalogue of cruelty from continuing is to bring an end to this senseless war – in line with the UN Charter and international law,” the High Commissioner insisted. “My most fervent wish is for all people in Ukraine to enjoy the right to peace.”

In a press release issued later on Wednesday, the head of the UN Human Rights Council-appointed monitoring mission, Matilda Bogner, said the summary executions examined in the report may constitute a war crime, noting that her team in Bucha had documented the killing of 73 civilians (54 men, 16 women, 2 boys, and 1 girl) during the reporting period, and is in the process of corroborating an additional 105 alleged killings.

Summary executions often followed security checks by Russian armed forces. “A mere text message, a piece of camouflage clothing, or a record of previous military service could have fatal consequences,” she said.

The report states that the UN has, so far, documented the violent deaths of 441 civilians (341 men, 72 women, 20 boys and 8 girls) in the three regions in the initial six weeks of the Russian invasion alone.

The report cautions the actual figures "are likely to be considerably higher" as work is still ongoing to corroborate an additional 198 killings that occurred in the Kyiv, Chernihiv, and Sumy regions occupied by Russia in the initial stages of the offensive.

Civilians were targeted on roads while moving within or between settlements, including while attempting to flee the hostilities,” Ms. Bogner said.

The report examines 100 killings in more detail. Of that number, 57 amounted to summary executions (48 men, seven women, and two boys). Thirty of those took place in places of detention while the remaining 27 victims "were killed on the spot, shortly after coming under the control of Russian forces", the press release outlined.

“Russian soldiers brought civilians to makeshift places of detention and then executed them in captivity. Many of the victims’ bodies were found with their hands tied behind their backs and gunshot wounds to their heads,” the mission head said.

The report found that men and boys comprised 88 per cent of all victims of summary executions, suggesting that males were disproportionately targeted on the basis of their gender.

“Much needs to be done to hold those responsible to account”, according to the mission, adding that UN rights office, OHCHR, has found no information that the Russian authorities have been actively investigating or prosecuting any of the cases concerned.

Ms. Bogner called on Russian authorities to promptly investigate all alleged violations of international law and to bring those responsible to justice.