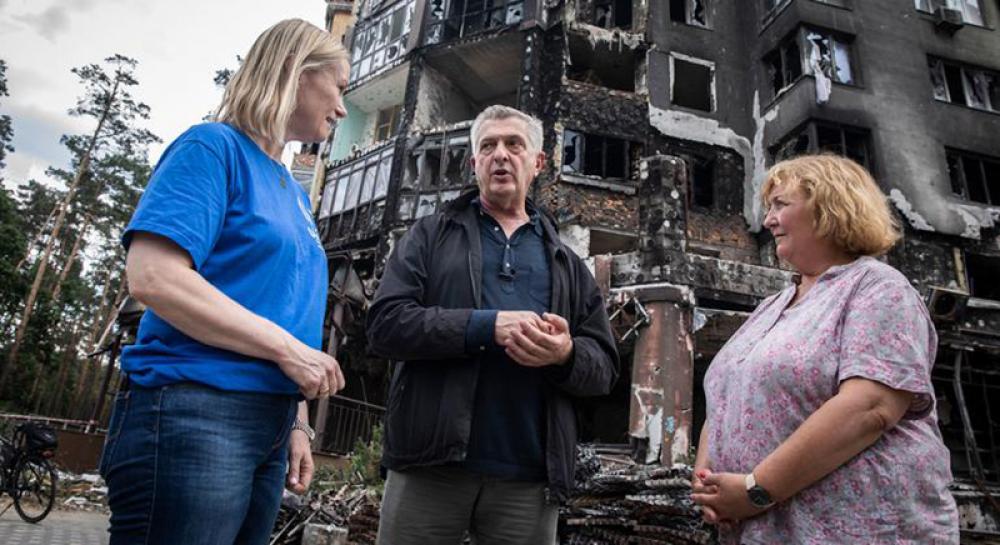 New York: Responses to climate change must also consider its link to both conflict and the displacement it causes, UN High Commissioner for Refugees, Filippo Grandi, said in a briefing to the Security Council on Wednesday.

Mr. Grandi expressed hope that these dimensions “will be in clearer focus” at the COP27 UN climate change conference, opening this weekend in Egypt, and at its successor conference in a year’s time.

The climate emergency is ravaging resources and creating tensions, including between communities, particularly in already fragile contexts where authorities do not have the means to support adaptation and resilience.

“I fear that without more attention and much greater financing for prevention, adaptation, and development and governance support - tensions, frustrations, competition will grow and spark wider conflict, with deadly consequences – including displacement,”  he said.

The UN refugee chief was in Somalia last week where he met emaciated women, men and children affected by conflict and the historic drought in the Horn of Africa.

Refugees from the country have been pushed into drought-affected areas of neighbouring Kenya.

“The confluence of climate change and conflict has created very protracted displacement: therefore, inclusion and where possible integration, both in refugee contexts and situations of internal displacement, are important peacebuilding measures requiring greater international recognition and support,” Mr. Grandi told the Council.

This “spiral” is evident in several other hotspots, including Africa’s Sahel region, he added.  Three million people there have been uprooted by climate change, poverty, weak governance and armed group activities, as well as “the often brutal reaction of governments”.

Mr. Grandi said he used the climate emergency, and its connection to conflict and displacement, to convey the “enormous complexity” of refugee crises today.

UNHCR staff have responded to 37 emergencies around the world in the past 12 months alone, in countries such as Afghanistan, the Democratic Republic of the Congo, Ethiopia, Myanmar and Syria.

Meanwhile, Russia’s invasion of Ukraine has forced some 14 million people to flee their homes, sparking the fastest and largest displacement crisis in decades.

“Ukrainians are about to face one of the world’s harshest winters in extremely difficult circumstances. Humanitarian organizations have dramatically scaled up their response, but much more must be done, starting with an end to this senseless war,” he said.

“Unfortunately, we see the opposite, and the destruction caused by strikes at civilian infrastructure, which happens as we speak, is quickly making the humanitarian response look like a drop in the ocean of needs.”

Mr. Grandi concluded his remarks by stressing the need for action in four areas, starting with resources.  Despite a record level of income, UNHCR is facing a major funding gap in some crucial areas, such as food aid for refugees.

He also called for “seriously strengthening peacebuilding” in fragile countries, for example by reinforcing police, judicial and local government capacity, and overall rule of law.  This is critical to both resolve displacement, by allowing refugees to return home, and to prevent conflict from recurring.

For his third point, Mr. Grandi stressed that humanitarian action must be better safeguarded, as threats are increasing, with deadly consequences. Warring parties must protect humanitarian work and enable access to people in need.

“Furthermore, everyone must uphold international humanitarian law and contribute to preserving the civilian character of refugee settings – an increasing challenge in many parts of the world. Armed elements must be separated from refugees, and those displaced and those needing protection must not be conflated with combatants,” he said.

The UN refugee chief also presented another side of the duty of care issue, as millions of displaced and vulnerable people are living in areas under the control of non-State actors, or in countries under sanctions.

He said no matter how polarised the context, aid workers must be able to operate wherever they are needed, which at times may involve “uncomfortable interactions” with those who control territory they need access to.

“If I raise this…it is because we are often forced to negotiate humanitarian carve-outs, as they call them, case by case. I therefore welcome the current efforts in this Council to ensure greater predictability in these matters,” he added.

His final point was a call for the international community, and countries on the Council, to overcome their divisions and disagreements “at least when you discuss humanitarian issues, and hopefully when you address or strive to address the root causes that are displacing people around the world.”