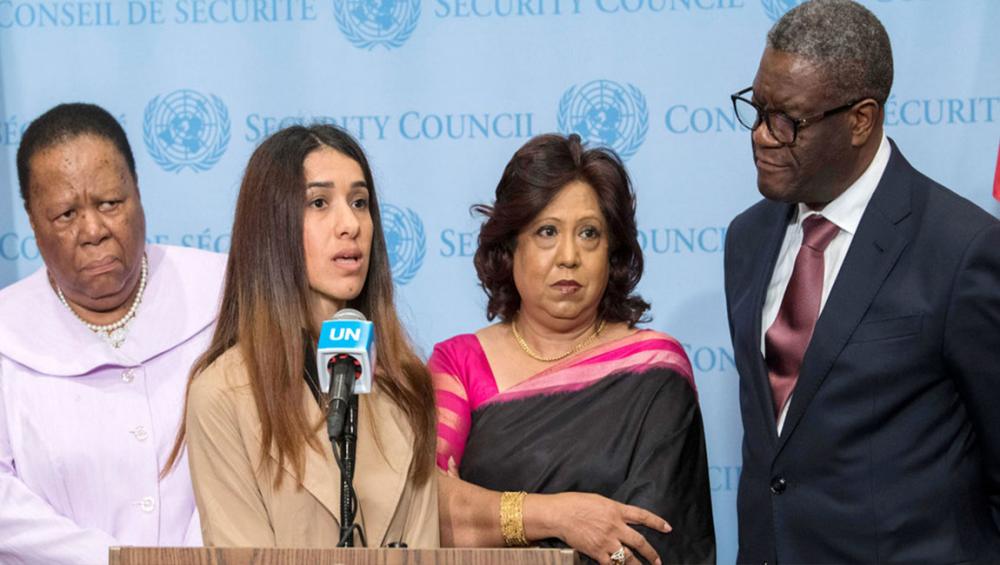 New York: Ten years ago, the UN Security Council established a mandate to prevent and address the scourge of conflict-related sexual violence. At a commemorative event on Wednesday, the UN deputy chief described that commitment as essential to “highlight, prevent and seek justice for this crime”.

The 2009 mandate had “sent a clear message that sexual violence during times of upheaval and conflict is not the inevitable collateral of war but a horrific violation of human rights and international law”, Deputy Secretary-General Amina Mohammed spelled out.

She said the international community had been galvanized by the 2009 decision to intensify advocacy and action to end wartime rape and the social stigmatization of survivors, as threats to security and inclusive peace.

“In the past decade the United Nations has responded to the demands of victims and survivors by creating a global normative framework and a set of institutional arrangements”, Ms. Mohammad said, elaborating on Council resolutions, investigative mechanisms and the establishment of the Office of the Special Representative.

That job currently held by Pramila Patten, the UN’s Special Representative of the Secretary-General on Sexual Violence in Conflict (SRSG-SVC), who officially launched a new Global Fund for Survivors at Wednesday’s event.

"The Global Survivors Fund is unique, because this is 100% survivor-centric. Survivors must be integral part of this process." -Nadia Murad, Yazidi survivor of #CRSV and #nobelpeaceprize Winner with @DenisMukwege

During her visits to diverse, war-torn countries, Ms. Patten relayed that survivors had consistently demanded “above all else” that the perpetrators be brought to justice; and that they be provided with material assistance to rebuild their lives and livelihoods.

“Reparations are what survivors want most, yet receive least”, she said. “The dawn of a new decade for this mandate is the time to deliver on these demands, and to put survivors first”.

The fund will provide reparations for survivors of conflicts around the world.

She underscored that a survivor-centered, rights-based response “means giving voice and choice to survivors, restoring their agency, building their resilience and enshrining their experience on the historical record”, in short, resuming “the quiet miracle of a normal life, which so many of us take for granted”.

In closing, Ms. Patten encouraged those present to “seize this moment to set the stage for a new decade of decisive action to remove sexual violence from our daily headlines and relegate it – once and for all – to the annals of history”.

Meanwhile, representing event co-host, South Africa, Dr. Naledi Pandor, Minister of International Relations and Cooperation, spoke eloquently on the need for a multidisciplinary, multisectoral approach to protect the most vulnerable – both in times of conflict and peace.

Citing her own country, she pointed out that “the conflict and violence of Apartheid increased violence of toxic masculinity”, which underscored the need to strengthen law enforcement mechanisms; promote social cohesion; protect and reaffirm the rights of victims and survivors; and provide support to those affected by violence.

She advocated for more research to “have a deeper understanding” of the factors that lead to violence and to end the scourge of violence against women, saying “I don’t think we yet are doing enough”.

Noting South Africa’s significant involvement in peacekeeping operations, Dr. Pandor said “it has been most troubling that…some of our armed forces have been involved in sexual and gender-based violence”.

Calling it “a shame for our country”, she stressed that “if we deploy uniform services in any part of the world…they must be trained to understand that they are there to protect”.

Recounting the testimony of a uniformed woman who “had been kidnapped by men in Darfur and faced the threat of rape”, the South African Minister drew attention to gender-based violence also faced by women peacekeepers, soldiers and police in conflict situations.

"Our meaningful insights should be involved”, said UN Goodwill Ambassador Ms. Murad, a Yazidi woman who was herself raped by ISIL extremists in Iraq, who enslaved thousands. “Survivors need to be part of the solution."

Noting that the fund is not a substitute for justice, and that “criminals have to pay for their act”, Congolese gynecologist Dr. Mukwege, a vocal advocate against gender-based violence, said that "the Global Survivors Fund establishes a direct way for survivors to have access to reparations” and “will change individuals, families, and communities all around the world”.