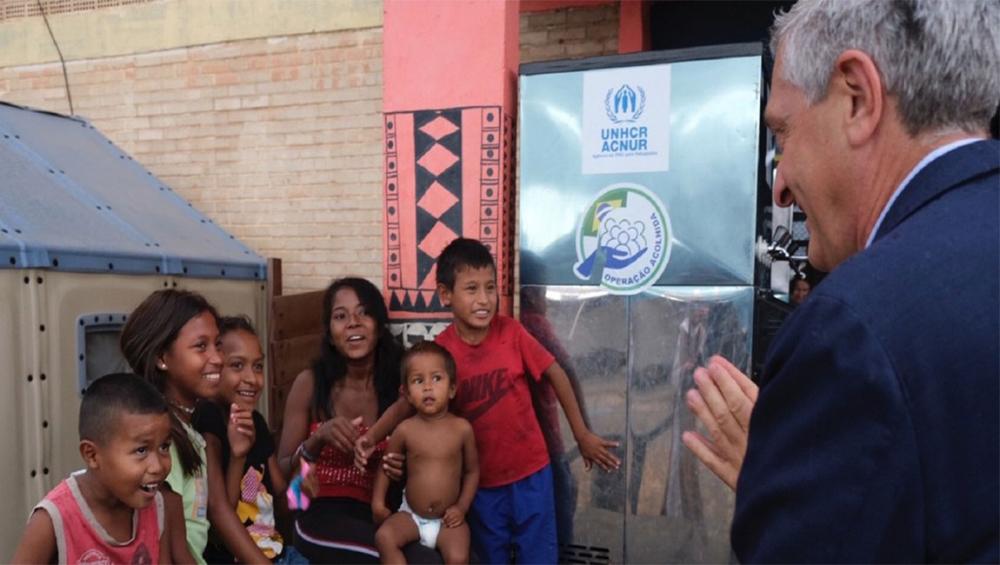 New York, Aug 20 (JEN): While praising the “efficient, coordinated, humane and innovative response” by Brazil on behalf of fleeing Venezuelans, the UN refugee chief has said that the sheer number of those on the run is proving to be a major challenge, calling for greater international support.

“The solidarity of the people of Brazil with the Venezuelan refugees and migrants has been exemplary”, said UN High Commissioner for Refugees Filippo Grandi on Sunday from the Brazilian capital, Brasilia. “But the impact on the host communities in states such as Roraima and Amazonas, has been overwhelming”.

The UNHCR chief was speaking at the end of a four-day visit to Brazil with an urgent appeal for increased international engagement, including from financial institutions and development actors in the communities hosting Venezuelan refugees and migrants.

Tensions started escalating across Venezuela at the end of January, when Juan Guaidó, head of the country’s National Assembly, challenged the legitimacy of sitting President Nicolás Maduro and was declared interim president by the National Assembly. President Maduro has been in power since 2013 and was sworn in again for a second term on 10 January.

There are currently more than 180,000 Venezuelan refugees and migrants in Brazil, with an average of 500 arriving daily in the northern state of Roraima, which is geographically isolated from the rest of the country and has the lowest per capita income and few economic opportunities.

“I was told that in some border communities, 40 per cent of patients and 80 per cent of women giving birth in hospitals are from Venezuela”, he reported. “There has been a similar impact on education, employment, housing and social services”.
Grandi said that efforts by the authorities and Brazilians themselves must be “adequately supported by the international community”.

“Local people have been at the forefront of the response to the needs of Venezuelan refugees and migrants”, he explained, urging that locals should not be left to cope on their own.

Grandi highlighted some of the specific responses made by the Brazilian Government on behalf of Venezuelan refugees, including the Operacao Acolhida initiative to provide registration and documentation upon arrival, as well as emergency humanitarian assistance, including food and temporary shelter.

He said he had been “hugely impressed” by the “efficient, coordinated, humane and innovative response to address humanitarian needs and promote solutions for Venezuelans…however, many challenges remain due to the growing number of arrivals”.

He noted with concern “the situation of the indigenous Venezuelan population, the dire conditions of many Venezuelans living outside official shelters and the impact on local infrastructure and services”, calling for “urgent action” by the federal and local governments, with the support of civil society and the UN system, to address health, education, livelihoods and other critical needs”.

Grandi also acknowledged Brazil’s leadership in refugee issues as well as the country’s active participation in the regional response to the massive outflow of Venezuelans.

Latin American countries have received the vast majority of the more than four million Venezuelan refugees and migrants who have fled in recent years.

Before arriving in Brazil, Grandi visited Chile, where he thanked the people and Government for the efforts made to receive and provide support to over 400,000 Venezuelans.

If the current trend continues, more than five million refugees and migrants could be outside Venezuela by the end of 2019, according to the UN refugee agency.

A recent study by UNHCR shows that more than half of Venezuelan refugees and migrants in Latin America have faced or continue to face situations of risk or vulnerability. Many have had to make drastic choices in order to survive, such as begging, sending their children out to work, or even resorting to survival sex.

Grandi’s appeal is in line with the Global Compact on Refugees which calls for greater support to refugees and the communities that host them, often among the poorest in the world, and also aims to help refugees become more self-reliant so that they can contribute more to their own future and to that of the host community.


The head of the United Nations refugee agency, Filippo Grandi, meets Venezuelan refugee children during his visit to Brazil.