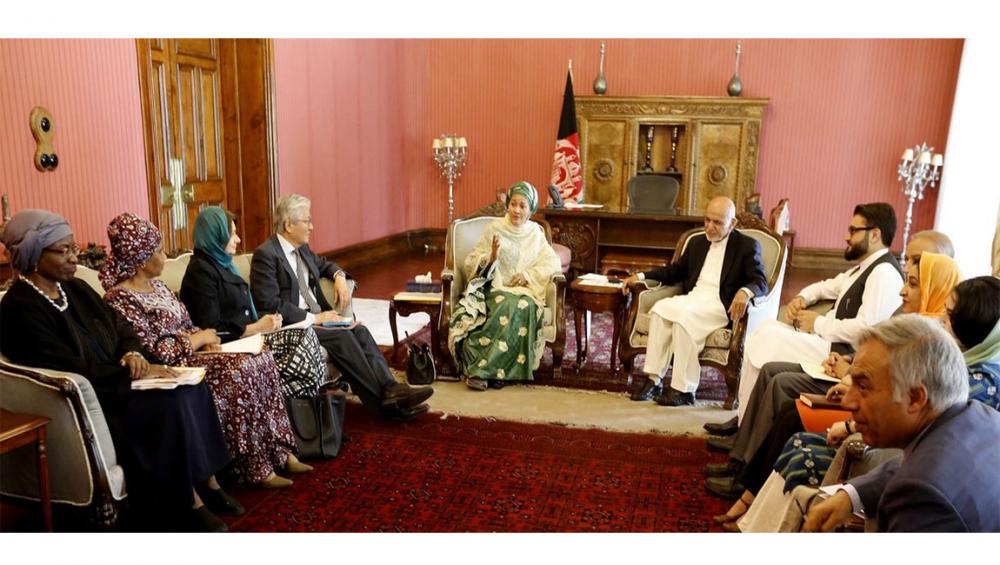 New York, July 22 (JEN): The UN deputy chief issued an impassioned plea on Sunday for Afghans to reconcile with the past and put “women at the centre” of all efforts to forge a durable peace, and a truly inclusive political process where women’s voices are truly heard.

Amina Mohammed was speaking to reporters in the capital Kabul, after leading an all-women delegation of top UN officials for an intensive two-day “solidarity mission”, focussed on women, peace and security. She was joined by UN Political and Peacebuilding Affairs chief, Rosemary DiCarlo, the Executive Director of the UN Population Fund (UNFPA), Natalia Kanem, and the head of UN Women, Phumzile Mlambo-Ngcuka.

The Deputy Secretary-General said they had come ahead of the key presidential election, due to take place at the end of September, but also to lend their support for a peace process “which is integral to the future, and the sustainability of all the efforts and aspirations, the Government and people of Afghanistan have.”

Only a few days ago, a bomb attack just outside Kabul University, reportedly killed 10 people - students and a traffic officer - and wounded 33 others, while Taliban militants reportedly detonated a bomb outside police headquarters in Kandahar city, killing 11 and wounding nearly 90. Despite the on-going violence, Afghan political leaders held ground-breaking talks in Qatar earlier this week with Taliban representatives, with both sides calling for a reduction in civilian casualties.

“At the end of two days we have been impressed with the leadership at all levels of government from Kabul out to the local areas, where you see that there is an investment in people, in particular in women’s empowerment’, said Ms. Mohammed.

The high-level UN delegation held meetings with President Ashraf Ghani and Chief Executive Abdullah Abdullah on Saturday, and also met a diverse group of women, hosted by Afghanistan’s First Lady, Rula Ghani. They also met religious leaders, who have a crucial role to play in bolstering the peace process.


On Sunday, the delegation travelled outside Kabul to the province of Bamyan, where UNFPA is running a series of support programmes and services for women of reproductive age and families, as well as tackling gender based violence (GBV). They also visited a UN demining site, and the UNESCO World Heritage Site of the Buddhas of Bamyan, which were dynamited and destroyed by the Taliban in March 2001, which ruled the country until the allied invasion later that year.

The deputy chief said her face-to-face conversations with Afghan women during the mission had left her with no doubt that women are “in leadership roles, decision making, they know exactly where they want to go - and what they need from us is support”, she told reporters.

“On the peace process”, she continued, it had to be inclusive: “And inclusive means women at the centre”, especially when it comes to addressing the needs of victims of violence.

“You cannot address peace and its sustainability, if you cannot come to terms with reconciling the past. So this has been an incredibly important opportunity for us”, said the Deputy Secretary-General, noting that during the trip they had also been gratified to see “the gains of the investments that have been made by the UN system and its partners over the years.”

We'll back Afghan women 'at every step' - UN Women chief

The head of UN Women said that she had been struck by talking to women who had lived with the “oppressive legacy of the Taliban’s rule – which banned them from attending school, work or even speaking publicly or leaving the house without a man.”

“These same women have consistently and courageously advocated for their voices to be heard, their priorities to be addressed and their agency to be recognized”, said Ms. Mlambo-Ngcuka. “And they do not stand alone, because UN Women and the UN, are here to back them up at every step.”

She said that as the momentum builds for peace talks with the Taliban, “ensuring women’s meaningful participation in the peace and reconciliation process and in the upcoming elections is more urgent than ever. Women must be able to exercise their right to define what peace means for them, and to have a seat at the table where the future of the country is being negotiated”, said the Executive Director. “Only then we will really see durable peace and democracy flourish in Afghanistan.”

In Bamyan, around half of the women who give birth, still deliver at home without any skilled birth attendant. GBV is a critical concern in the province, with around 20% of women experiencing some form of domestic violence, said UNFPA.

The agency runs a network of Family Protection Centres together with the Afghan Ministry of Public Health, within main hospital and health facilities. They also support more than 100 Family Health Houses, providing essential reproductive, maternal and child health services to around 300,000 living in under-served areas.

UNFPA chief, Natalia Kanem, said that “ending sexual and gender-based violence is our collective responsibility. It not only affects a woman’s dignity, health and wellbeing, but prevents her from participating actively in her community and contributing to peace.”

The agency, she added, “is on the frontlines of this battle in Afghanistan, and indeed around the world, leading the UN system’s response on the ground. If we stand united in our pursuit of gender equality, human rights and justice, we can prevent this scourge one person, one community, one country at a time.”

“Despite tremendous suffering, the resilience of the women and girls I met on this visit gave me hope for the future of Afghanistan”, said Ms. Kanem. UNFPA is “dedicated to improving the health and well-being of Afghan women, laying the foundation for a life of choice and equality. We are making progress, but there is still a long way to go.”

“Only when women are safe and empowered to make decisions over their bodies and lives”, she noted, “will the country be able to achieve sustainable development and peace.”