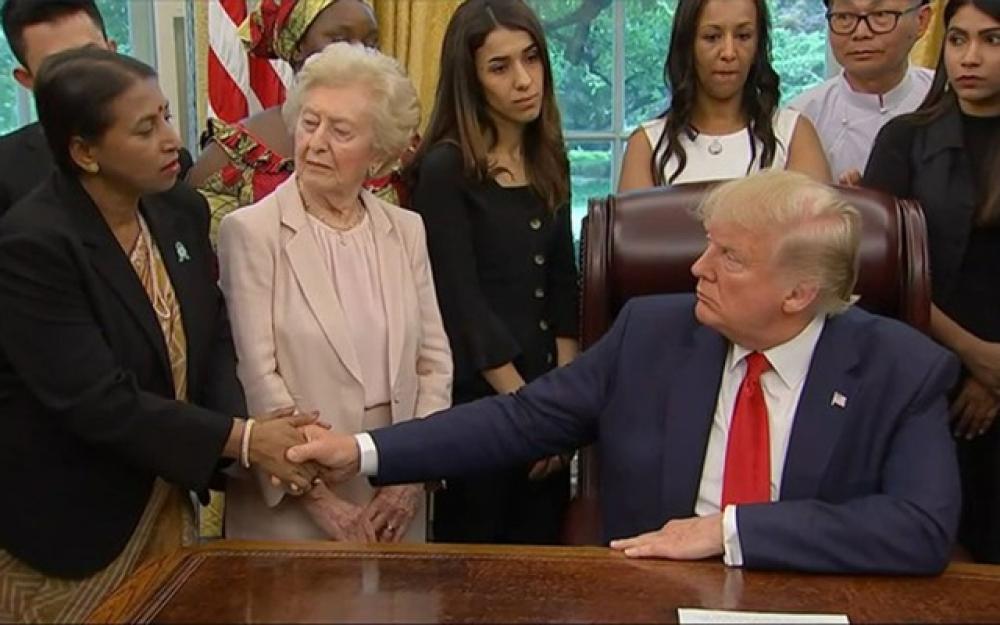 Dhaka: A Dhaka court on Sunday rejected a sedition case filed against Bangladeshi national Priya Saha for making remarks on religious persecution in her country during her meeting with US President Donald Trump.

On July 18, Priya, one of the organising secretaries of Bangladesh Hindu-Bouddha-Christian Oikya Parishad, told the US president that 37 million Hindu, Buddhist and Christian people have disappeared from Bangladesh. "Please help us, there are still 18 million minority people, we do not want to leave our country," she told Trump.

"I have lost my home, they burned my home, they have taken my land, but no judgement. The Muslim fundamentalists group are always getting political shelter," she said.

The video of her statement had gone viral on the social media.

In his complaint, Barrister Suman also appealed to the court for issuing an arrest warrant against her and said her comments on Bangladesh are all false, fabricated and baseless which are tantamount to sedition, reported The Daily Star.

Priya Saha, the Bangladeshi national,  recently participated in the  Second Ministerial to Advance Religious Freedom which was held in US Department of State in Washington DC.

In a video captured at the programme, Priya Saha was seen narrating the situation of minorities in Bangladesh to the US President.

The Daily Star reported that at least five separate sedition cases have been filed today against Priya Biswas Saha. The cases were filed in Dhaka, Brahmanbaria, Natore and Sylhet.

Meanwhile, Prime Minister Sheikh Hasina has disapproved a planned government initiative to expose Priya Saha to sedition charges ahead of obtaining her explanation about her comments during an interaction with US president Donald Trump, road transport minister Obaidul Quader was quoted as saying by the newspaper.

“The prime minister last night sent me a message (from UK) saying no legal action was required to be initiated hastily,” Quader was quoted as saying.

Prime Minister Sheikh Hasina's ICT Affairs Adviser and son Sajeeb Wazed Joy alleged that the US embassy might have 'ulterior motive here' behind what Saha told the US President.

"This tells me the US Embassy is the one that had an ulterior motive here. They picked Priya Saha because they knew she would make this outrageous statement. The only logical outcome of making such a claim to the US President is to build demand for a military intervention in the region on humanitarian grounds. This ties in with another US Congressman's recent statement that Bangladesh should take over Rakhine state," Joy wrote in a Facebook post.

"It is no secret that the US Embassy is decidedly anti-Awami League. They have always hosted Jamaat and war criminals at all their events. With their support of Priya Saha's statement they now appear to be plotting a direct takeover of our country," he said.

"Fortunately for us, President Trump and his administration have a very different policy of non intervention in foreign affairs. They are also not so stupid to believe such a ridiculous claim," Joy said.