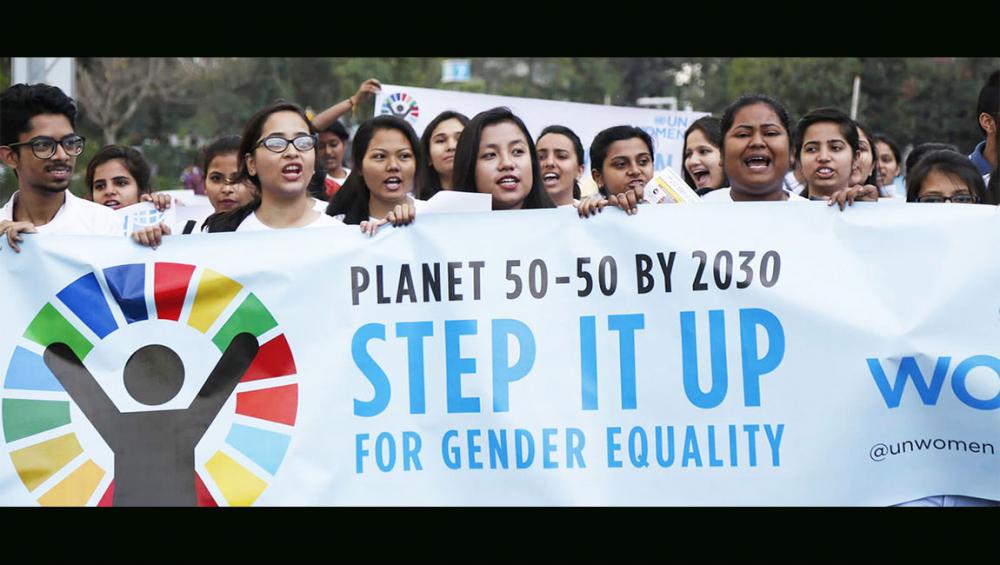 New York, July 16 (JEN): Without the full participation and leadership of women, “we have no hope” of realizing the 2030 Agenda for Sustainable Development, the President of the United Nations General Assembly told gender equality leaders on Monday.

“This is an obvious point to make, but it is, sadly, one that we cannot repeat enough”, she said, opening the day-long discussion at UN Headquarters in New York to identify best practices aimed to knock down barriers hindering women’s full participation and leadership, in what she called “our shared mission this year”.
As the fourth woman in UN history to ever preside over the General Assembly, the Organization’s main and most representative deliberative body, Mari?a Fernanda Espinosarecognized that women decision-makers must lead by example to safeguard achievements and accelerate progress towards gender equality.

Noting that women have come a long way since the adoption of the Beijing Platform for Action nearly 25 years ago, she pointed out that they still lag behind on virtually every Sustainable Development Goal (SDG).

“For example, just 42 per cent of countries give women the same rights to land ownership; just 60 per cent give women equal access to financial services”, she flagged. “And the gap is even greater for women in rural areas, women with disabilities, indigenous women and older women”.

Moreover, “no country has achieved full gender equality” and women continue to face discrimination in every region of the world, “from suffocating stereotypes to discriminatory laws, harmful practices and violence”, she maintained.

This runs counter to the “wealth of hard evidence” of the positive impact that “women’s participation and leadership have on economic stability, good governance and investment, including in health, education and social protection.

Child mortality decreases by almost 10 per cent for each additional year of education women of reproductive age have.

“This is just an example of the transformative, society-wide benefits of women’s empowerment”, Espinosa said. “Today’s discussion is anchored in this crucial link”.

The event, “Gender Equality and Women’s Leadership for a Sustainable World”, issued a 'Call for Action' that aligned with the theme of this year’s High-Level Political Forum (HLPF) on Sustainable Development: 'Empowering people and ensuring inclusiveness and equality”. The Forum, the main UN platform monitoring follow-up on States’ actions towards the SDGs, is currently under way in New York.

She invited all leaders to join the global “Call”, which 18 world leaders supported, as new synergies were being explored with other initiatives.

“Many of you will have heard me refer to gender equality as the closest thing we have to a ‘magic formula’ for sustainable development”, she said, noting that while “magical in terms of impact”, there is “nothing magical about how to achieve gender equality”.

The 2030 Agenda and the Beijing Declaration and Platform of Action set out what must be done to empower women and girls, and what is needed now are “greater political will; a razor-sharp focus on the most transformative, practical actions; and to widen their scale and impact” according to the Assembly President.

“Today, we find ourselves in urgent need of renewed leadership, partnership and mobilization”, stressed Ms. Espinosa. “It is no secret that some of the SDG targets relating to women’s rights were the subject of tough negotiations… and the landscape has become more challenging even since then”.

She underscored that “we cannot take for granted the gains we have made”. And painted a picture of women on the ground working hard, “under duress and at great personal risk” to push back against a pushback, spelling out that they “need our support”.

“This is our opportunity to recommit to women’s rights and empowerment, to rise to challenges old and new, and – reclaim the agenda”, concluded the Assembly President.

Deputy Secretary-General Amina Mohammed told the meeting that women have a strong track record as agents of change.

“From boardrooms to parliament, from military ranks to peace tables and, of course, in the United Nations itself, more women decision-makers mean more inclusive solutions that will benefit everyone”.

Because women understand “intrinsically” the importance of dignity, equality and opportunity for all, the deputy UN chief upheld that “women’s leadership and greater gender balance will lead to unlocking trillions for economies, enhanced bottom lines for the private sector and stronger, more sustainable peace agreements”.

In addition to that, she stressed that “it is critical that we emphasize that women’s equal participation is a basic democratic right”.

For her part, Phumzile Mlambo-Ngcuka, Executive Director of UN Women, said that next year, when we celebrate the 25th anniversary of the implementation of Beijing Platform, “our theme is ‘Generation Equality’ because we are emphasizing the importance of intra-generational participation and the role of young people to take us forward”.

“All of these, drawn together, give us a fighting chance to increase and sustain the participation of women”, she underscored. “We can’t wait people, time is up. Time is really, really up”.

The high-level meeting brought together prominent women leaders from around the globe, including a Mexican Member of Parliament Gabriela Cuevas Barron who is also the president of the Inter Parliamentarian Union and Helen Clark, former head of the UN Development Programme (UNDP).