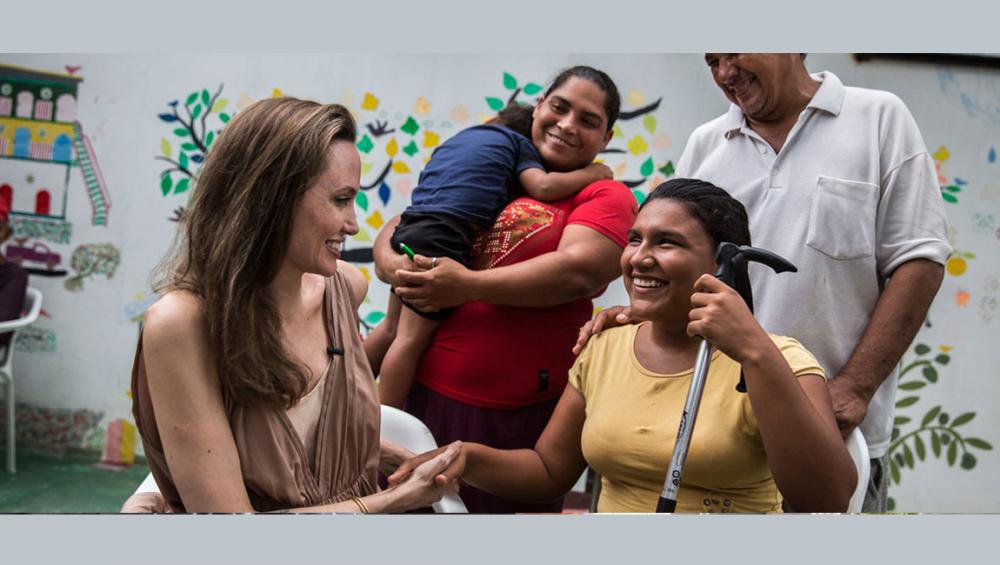 New York, June 11 (JEN): As the United Nations announced four million Venezuelans have fled their country, Angelina Jolie, a special envoy for the world body’s refugee agency, visited camps along the Colombian-Venezuelan border, where on Saturday she appealed for more leadership, more humanity and more support to countries bearing the brunt of the crisis.

“This is a life and death situation for millions of Venezuelans,” UNHCR Special Envoy Angelia Jolie told journalists at a press conference in Maicao, Colombia, wrapping up a two-day visit during which she met with refugees, returnees and Government officials to assess the human impact of a mounting exodus.

Saying it was not possible to put a value on the support that Colombia and Peru and Ecuador are giving to the people of Venezuela, “because it is the core of what it is to be human,” the Academy Award-winning actress said that in the world today, “we need that humanity more than ever, and rational thinking from people who are unafraid to take responsibility and show leadership.”

Jolie spoke to journalists less than ten kilometres from the border, at the Integrated Assistance Centre, which is hosting Venezuelans for stays of up to 30 days. It was opened in March by UNHCR and the Colombian Government and currently provides 350 highly vulnerable people with shelter and food as well as legal assistance, activities for children, medical assessments and psychosocial support.

Plans to expand the centre’s capacity to 1,400 people have stalled due to a 79 per cent funding shortfall that has slowed the humanitarian response throughout the entire region, putting millions at risk, according to UNHCR.

At the centre, Jolie met one young family who crossed the border in April. Maria, a 41-year-old single mother with six children, spoke of how she sold the metal roof over her family’s heads back in Venezuela and spent the money to clothe her children and put shoes on their feet for the journey to Colombia.

“Your children will think back on this time as the time that you really saved them,” the UNHCR Special Envoy told her.

Jolie also visited Brisas del Norte, an informal settlement that is home to hundreds of Colombian and Venezuelan families. UNHCR says the Colombians are former refugees who returned to their country to escape the political and economic crisis in Venezuela, the same conditions that forced the Venezuelans to seek refuge here.

Linda Lopez, a 60-year-old Venezuelan woman who arrived one month ago, approached Jolie as she walked through the community and described the dangers she faced back home. “People are dying of hunger,” Lopez said, breaking into tears. “My whole family fled.”

Earlier on Saturday, the Special Envoy met with Colombian President Iván Duque in Cartagena. She expressed her gratitude to the government and people of Colombia for responding to the Venezuela crisis with what she called “truly remarkable generosity” – particularly as it works to implement a peace plan following five decades of bloodshed within its borders.