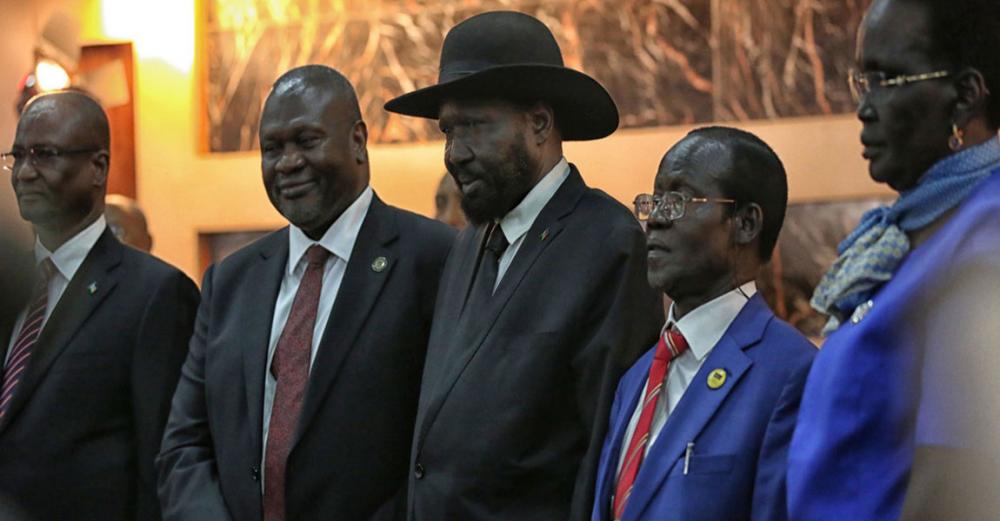 New York : Positive developments in South Sudan have “moved the country further along the road to sustainable peace”, the top UN official there told Security Council members on Wednesday.

The world’s youngest nation has been mired in instability and conflict for nearly all the eight years since it gained independence from Sudan.

In 2018 President Kiir and his former Vice-President and long-time political rival, Mr. Machar, signed a peace accord with the hopes that it would end the crisis and improve the lives and safety of millions of South Sudanese. Last month, Mr. Machar was sworn in as first Vice-President, sealing the peace deal at the State House in the capital of Juba.

“On 15 February, President Salva Kiir – against the wishes of many of his many supporters – agreed to a compromise to return South Sudan to its pre-2015 position of 10 states, although he added three administrative areas”, Special Representative and head of the UN Mission in South Sudan (UNMISS) David Shearer told the Council via VTC.

He noted that Machar had “accepted the challenge to join a transitional government in Juba serving as the country’s First Vice President – despite transitional security arrangements not yet in place”.

With the deadlock broken, five Vice Presidents were subsequently sworn in.

Shearer attributed the progress to “the political willingness of two men who put the interests of their country first”: President Kiir for making “a critical concession”, and Mr. Machar for agreeing to return to the capital.

“We often speak of courage in war and battle”, he said. “But peace also requires courage”.

Impact on the ground

As relief swept the country and ministerial discussions began, the UN envoy said that groups who did not sign on to the 2018 Peace Agreement will return to Rome next week for negotiations.

Citing an International Organization for Migration (IOM) estimate that some 800,000 people had returned since the Peace Agreement was signed, Mr. Shearer assured the Council that “the new government can prompt positive change”.

Meanwhile, UNMISS has stepped up its protective presence to build confidence in areas of return and the UN Police (UNPOL) is expanding technical assistance and beginning to co-locate with the National Police Service to enhance policing capabilities.

Noting a change in the protection environment, the UN envoy said that as “the ceasefire and the free movement of opposition leaders across South Sudan has lowered the risk of violence”, UNMISS has prioritized peacekeepers to “hot spot locations and areas of return”.

In line with the Peace Agreement, a properly functioning state requires an end to:

Impunity – by increasing support to the police and justice chain.
Corruption – through financial accountability and transparency.
Dependency – through shifting to support programmes that promote self-reliance.
Exclusion – to ensure that all South Sudanese are part of the democratic process.

However, he warned that the lack of health and education in rural areas has discouraged returns and must be redressed by humanitarian and development actors, “including donors”.

Nevertheless, a daunting array of challenges will test the new government’s unity.

“Most urgent is the need to move on the transitional security arrangements”, the UNMISS chief said, pointing out that pre-transitional structures have become redundant and “implementation is dangerously lagging”.

And precarious humanitarian situations exist in many states.

“The anticipated improvement in harvest levels 12 months ago was quashed by the extensive flooding last year”,  he

explained, adding that crops were destroyed, livestock lost and water supplies contaminated, “worsening health conditions, particularly for children and those people who have sparse access to health services”.  It has also contributed to communal violence between pastoralists.

While the threat of damage from locusts has yet to have a substantial impact, he updated that the UN agriculture agency, FAO, is “gearing up its preparations to spray to protect crops”.

Sometimes “just” being there makes all the difference. Residents of the Tonj region in #SouthSudan know. After weeks of immobility and insecurity caused by intercommunal clashes, the presence of #UNMISS peacekeepers is having a positive impact: https://bit.ly/2VNDOxB  #SSOT #A4P

As the UN mission is due for renewal, Shearer acknowledged that it would be premature to propose a significant change in its mandate, but with the improved mobility of peacekeepers, “plans are in place” to increase “riverine and air support, particularly during the rainy season”.

There will also be an expansion in UNPOL’s role and Rule of Law unit “to better tackle impunity and support the shift to civilian law enforcement and accountability”.

While the international community may feel cautious in moving forward, the UN envoy stressed that we cannot “totally step back to wait to see what happens before making a commitment”.

“Our actions can push South Sudan further toward sustainable peace; our inaction can help condemn it to failure”, he spelled out.

“International partners must remain engaged – both in solidarity and, at times, with pressure – to encourage compromise to achieve and maintain the unity”, concluded the Special Representative. “South Sudan’s future depends on it”.

On behalf of women and civil society, Betty Sunday, Coordinator of the Women's Monthly Forum on Peace and Political Processes in South Sudan, advocated for the recognition of the role that women’s groups played in building peace and argued that more women be involved in the political process.

“South Sudanese women have fought hard” for peace, yet “we are still far from achieving the 35 per cent quota for women in the transitional government body”, she said, providing, as an example, that a list of governors under consideration for office “did not include a single woman”.

“This young nation of ours will only achieve a full peace through the meaningful participation of women and women-led organizations”, she affirmed, calling on the Council “to stand with us”.

UNMISS/Nektarios Markogiannis
Salva Kiir, President of South Sudan, (centre right) shakes hands with Riek Machar, who was sworn in as First Vice President of the new Transitional Government of National Unity on 22 February 2020.