People
Crisis/Conflict/Terrorism
In aftermath of Libya airstrike deaths, UN officials call for refugees and migrants to be freed from detention 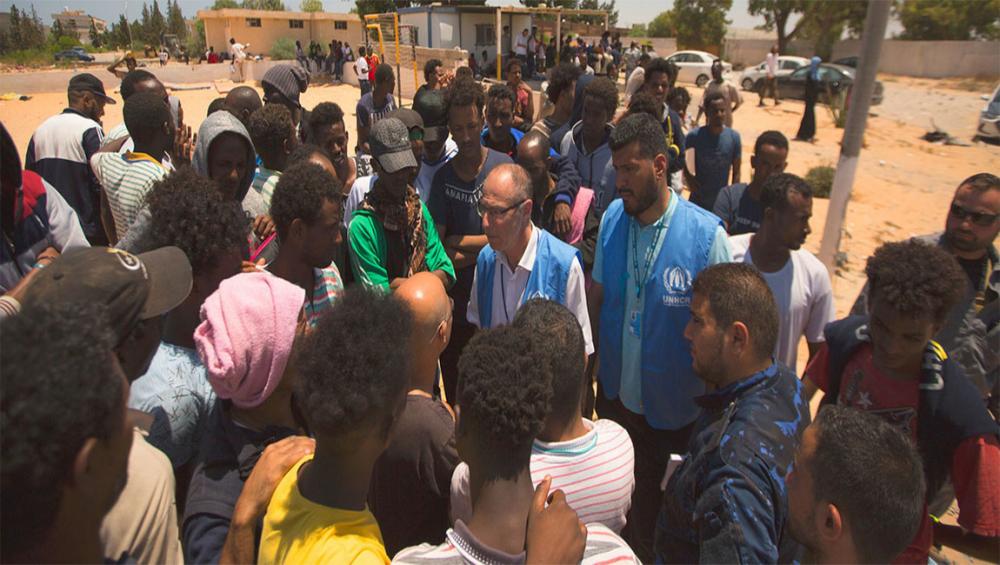 New York, July 13 (JEN): “As a priority, we ask that 5,600 refugees and migrants currently held in centres across Libya be freed in an orderly manner and their protection guaranteed” the UN refugee and migrants chiefs said in a joint statement, released on Friday.

The call comes in response to the 3 July airstrikes on the Tajoura Detention Centre in the eastern suburbs of the Libyan capital, Tripoli, which killed more than 50 migrants and refugees and injured more than 130, despite the location of the centre being known by both sides of the ongoing conflict in the country.

António Vitorino, Director General of the International Organization for Migration (IOM), and UN High Commissioner for Refugees Filippo Grandi, insisted that the international community should “consider the protection of the human rights of migrants and refugees a core element of its engagement in Libya”, pointing out that they have appealed to the European Union and African Union to prevent a repeat of the “tragedy”.

If the protection of refugees and migrants in Libya cannot be guaranteed, said the UN officials, they must be evacuated to other countries. For this to be possible, countries, they said, must provide more evacuation and resettlement places, and extra resources.

Vitorino and Grandi called for Libya to end the practice of detaining refugees and migrants rescued at sea, and consider alternatives, such as allowing them to live in the community, in open spaces, or establishing semi-open safe spaces such us the Gathering and Departure Facility run by the UN High Commission for Refugees (UNHCR).

Some 400 survivors of the airstrike have been moved to the Facility, they continued, which is now badly overcrowded. UNHCR is working to evacuate them from Libya, particularly the most vulnerable.

Some 50,000 registered refugees and asylum seekers, and an estimated 800,000 migrants, are currently living in Libya, and many remain detained in the country where “sufferings and human rights abuses continue”.

People rescued from the Mediterranean, said the UN officials, should not be taken to Libya, because it “cannot be considered a safe port”, and ships from European countries should resume search and rescue operations which have saved thousands of lives.

Commercial vessels should not be directed to bring rescued passengers back to Libya, the statement continues, and NGO boats which have attempted to take on similar operations must “not be penalized for saving lives at sea”.

Support to Libyan authorities, they conclude, should be conditional on an end to arbitrary detention of refugees and migrants, and a guarantee that human rights will be upheld. “Without this guarantee, support should be halted.”