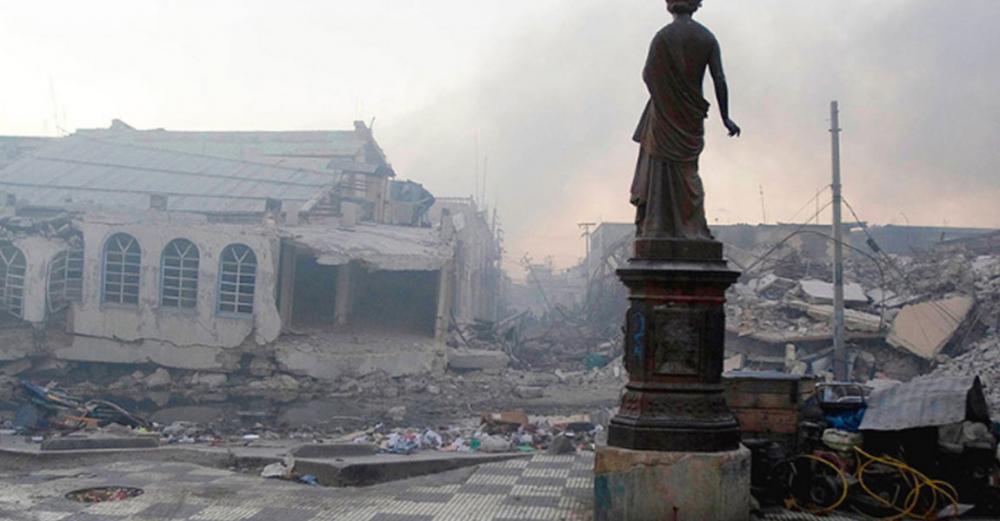 New York : More than 200,000 Haitians who perished in the devastating earthquake which struck the island nation ten years ago, were honoured in a solemn ceremony of remembrance at UN Headquarters in New York on Friday, along with 102 staffers who died – the single greatest loss of life in the Organization’s history.

Haitians had been starting a new year with optimism, recalled UN Secretary-General António Guterres at the wreath-laying, but “in a few seconds, their hopes turned to dust.”

“I will never forget the shock and sadness across the world and throughout the United Nations as the scale of the tragedy became clear”, he added.

Although 12 January 2010, was one of the darkest days in its history, Haiti “drew on the courage and determination of its people and the assistance of its many friends. Roads were cleared, homes were rebuilt, schools were reopened, businesses got back to work,” Mr. Guterres noted.

The UN chief took a moment in his speech to reflect on several aspects of the UN’s effort in Haiti that had caused more harm than good, recalling the cholera epidemic which began in 2010, widely believed to have been imported by peacekeepers.

“Among the many challenges, the United Nations deeply regrets the loss of life and suffering caused by the cholera epidemic. I welcome the significant progress that has been made towards eliminating the disease. We are also committed to resolving pending cases of sexual exploitation and abuse”, said Guterres.

He also noted the lack of progress in terms of Haiti’s economic, political and social development, with a crisis of leadership in recent months throwing the nation into turmoil: “Today, insecurity and slow economic growth are contributing to rising social tensions and a deteriorating humanitarian situation.

I urge Haitians to resolve their differences through dialogue and to resist any escalation that could reverse the gains of the past decade.”

He said the new Integrated Office in Haiti (BINUH) which replaced the 15-year peacekeeping operation. and the 19 agencies, funds and programmes present in the country, “will continue to work in partnership with the Haitian people on their path to recovery and prosperity.”

Before the ceremony, the UN chief visited what he described as “the moving new memorial”, entitled, ‘A Breath’, which now sits within Headquarters in midtown Manhattan, having arrived from Port-au-Prince.

"I thank the sculptor, Davide Dormino, and everyone who helped to transport it. I was particularly impressed by the inclusion of rubble from the Hotel Christopher, where so many of our colleagues perished."

He said the UN staff who died had been in Haiti “to help build stability and prosperity and consolidate peace and security, with international, national and local partners. Among them were policy advisers, political officers, humanitarians, development specialists, security officers, soldiers, lawyers, drivers and doctors.

When the quake hit, many United Nations personnel took part in search and rescue operations and carried injured people into the United Nations compound. Some had the heartbreaking duty of accompanying the body of a colleague home to their loved ones, for burial or cremation.”

The tragedy brought Haiti and the UN together, he said, “and we will never forget.”

The best way to honour the memory of the dead would be by “working alongside the people and Government of Haiti, and with the country’s friends and supporters throughout the international community.

Together, we will safeguard Haiti’s future and build lives of peace, prosperity and dignity for all Haitians,” he concluded.

Speaking on behalf of the Haitian Government, Patrick Saint-Hilaire of the UN Mission, said that ten years on, the signs of the earthquake were “still evident everywhere”.

He said the courageous people of Haiti were still “paying deeply” for the “adversity that has befallen Haiti” since then.

Thanking the UN and all who rallied around Haiti after the disaster in solidarity, he said that now, “it is up to us Haitians, first and foremost, to take responsibility for our current challenges and to take the necessary initiative to improve the state of our nation. Today, however, more than ever, our country needs to continue to forge solidarity, national and international, concrete and consistent with the aspirations of the Haitian people.”

There is “much work left to be done” he said, adding that as the mark the 10th anniversary, it is “not too late to take up the challenge of the complete reconstruction of Haiti.”

Remarks were also made by the President of the UN Staff Union, Patricia Nemeth, with some family members of those who perished attending the ceremony. Ambassadors from the 30 Member States who lost UN personnel in the tragedy were invited to lay flowers in front of the flag.

Afterwards, some participants and guests walked over to the memorial site, which initially lay on the grounds of peacekeeping mission MINUSTAH's headquarters in Port au Prince.