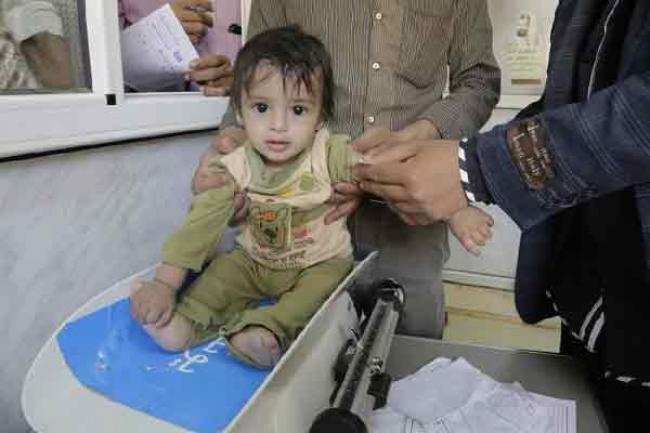 New York, Oct 1(Just Earth News): The United Nations Childrenâ€™s Fund (UNICEF) has reported that, along with its partners, the agency has completed a drive reaching more than 600,000 children under five years old and some 180,000 pregnant and breastfeeding women in conflict-torn Yemen with critical health and nutrition services.

“We have increased our geographical reach to all parts of the country as well as increased the number of times we do the integrated outreach. This has resulted in delivering medical assistance to the most hard-to-reach communities especially those most affected by the conflict”, said Julien Harneis, UNICEF Yemen Representative, in a news release yesterday. The 24-29 September nationwide campaign consisted of a package of health and nutrition services including vaccination, vitamin supplementation, deworming, screening for malnutrition and treatment for childhood infections, as well as antenatal and postnatal care for women. More than 34,000 health workers supported by 880 supervisors and monitors spread across Yemen’s 333 districts used about 10,000 vehicles and other means of transportation such as motorcycles, donkeys or simply walking long distances on difficult terrains to reach children and women in far-flung corners of the country, the agency said. UNICEF also noted that the health drive comes at a “critical time,” as Yemen’s conflict has put the lives of millions of children and women at risk. “With the health system hanging in the balance, such outreach programmes are helpful but are not sustainable in the long run. Outreach campaigns alone cannot address the medical needs of the population; the health system needs to be back on its feet urgently,”  Harneis said. Yemen has been engulfed in violence since a confrontation between the country’s Houthis (Ansar Allah) and the Yemeni Government in early 2014 led to a Houthi advance on the country’s capital, Sana’a, and an ensuing conflict which has involved support from outside parties. The UN has been heavily involved in efforts to resolve the crisis, and Kuwait had been hosting peace talks – facilitated by the UN envoy – with the Yemeni sides. A break in the peace talks went into effect in early August. Recently, Yemen’s Ministry of Health announced that it has run out of basic operational costs for the primary health-care system, UNICEF said. This means it won’t be possible to transport medical supplies including medicines from stores to far-flung health units, there will be no fuel or electricity for powering refrigerators for storage of temperature-sensitive vaccines, and medicines and health centres will have no light. The agency emphasized that throughout Yemen, 2.5 million children are at risk of diarrhoea, 1.3 million are at risk of acute respiratory tract infections, and 1.5 million children are malnourished, 370,000 of them suffering from severe acute malnutrition. UNICEF is scaling up its response but the humanitarian needs are “enormous,” the representative said. Since January, UNICEF has supported the vaccination of more than 4.6 million children against polio, and the treatment of more than 133,000 children against severe acute malnutrition. In addition, some 168,000 pregnant and breastfeeding mothers received support during and after pregnancy, including knowledge on how to care for their babies and of themselves.