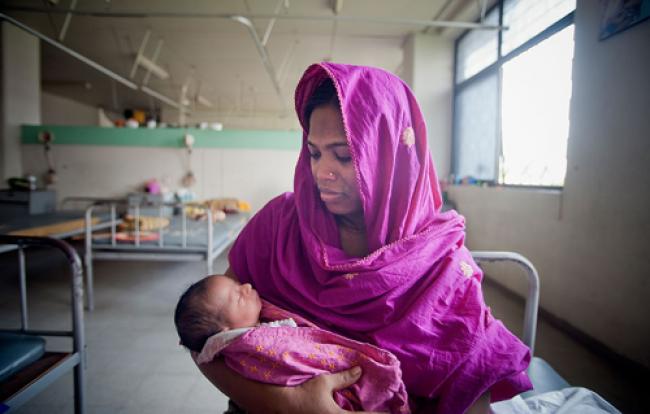 New York, May 20 (JEN): The majority of the almost 3 million children who die before they turn one month old could be saved if they received quality care around the time of birth, according to the findings released on Monday in a study supported by the UN Children’s Fund (UNICEF), which is urging additional attention and resources for this group of children.
“Focusing on the crucial period between labour and the first hours of life can exponentially increase the chances of survival for both mother and child,” said Mickey Chopra, head of UNICEF’s global health programmes.
While there has been “tremendous progress” in saving children under five, he said the world has stumbled in its progress to save the “very youngest, most vulnerable children.”
In its “Every Newborn Series” released on Monday, The Lancet identified the most effective interventions in saving newborns including breastfeeding and new-born resuscitation. The series, co-authored by experts from UNICEF, the London School of Hygiene and Tropical Medicine, and the Agha Khan University in Pakistan, among others, also commend ‘kangaroo care’ for premature babies, which consists of prolonged skin-to-skin contact with the mother.
According to UNICEF, 2.9 million babies die each year within their first 28 days. An additional 2.6 million babies are still-born, and 1.2 million of those deaths occur when the baby’s heart stops during labour.
“The first 24 hours after birth are the most dangerous for both child and mother – almost half of maternal and new-born deaths occur then,” the UN agency has reported.
Countries that have made the most progress in saving newborn lives have paid specific attention to this group as part of the overall care extended to mothers and under-fives. For example, Rwanda halved the number of new-born deaths since 2000.
The highest numbers of newborn deaths per year are in South Asia and sub-Saharan Africa, with 779,000 in India, 267,000 in Nigeria and 202,400 in Pakistan.
Among these countries, every USD 1 invested in a mother’s or baby’s health gives a nine-fold return on investment in social and economic benefit, according to UNICEF.
A survey of 51 countries with the highest burden of new-born deaths found that if the quality of care received by the richest were to become universal, there would be 600,000 fewer deaths per year – an almost 20 per cent reduction.
A mother and her newborn baby at the Maternal and Child Health Training Institute for medically needy in Dhaka. UN Photo/Kibae Park