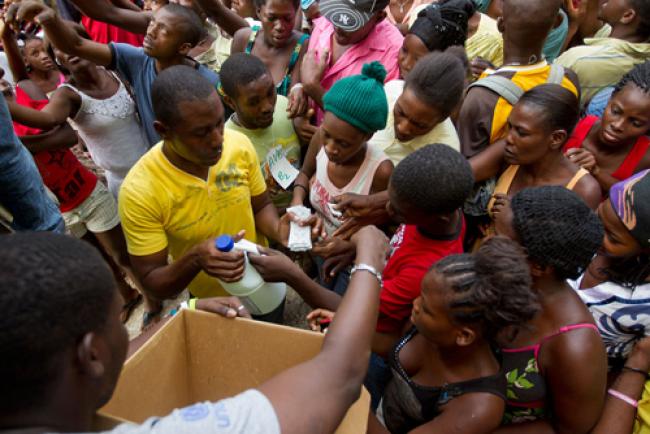 New York, May 2 (JEN): Significant gains in the fight against the cholera epidemic in Haiti have been recorded as the dry season ends and the United Nations continues to support the Government's comprehensive strategy of monitoring, rapid response and planning for long-term solutions, a top UN official in the impoverished country says.
“Since the beginning of the dry season, we have seen registered the lowest number of cases and deaths since the start of the epidemic, with a reduction of 75 per cent of cases in the first trimester of this year against the same period last year,” Peter de Clercq, the Deputy Special Representative for the Secretary-General in Haiti, told the UN News Centre.
“That is very good news and reflects our efforts so far are working,” he said. “Of course, every case of cholera is one too many. Every person that dies of cholera is one too many and is unacceptable and will cause us to work even harder to combat the disease,” he added.
Because the disease retracts to limited locations during the dry season, according to the UN Country Team, it presents a window of opportunity for the UN and its partners to target the highest risk areas with surveillance, analysis and rapid responsefor treatment and sanitation actions; work that continues throughout the year across wider sites of concern.
“Interventions are based on identifying where cholera occurs; then very rapid intervention teams go in and deploy a number of different measures including identifying, isolating and a whole range of water and sanitation-related activities that improve the environment and reduce the risk of the disease spreading,” de Clercq said.
An important endeavour has been differentiating cholera cases from acute diarrhoea, which has been widespread in Haiti for many years due to the lack of sanitation infrastructure. In fact, 80 per cent of suspected cases tested in February and March 2014 in sample areas turned out not to be cholera but acute diarrhoea. The analysis brings a sharper focus to health and sanitation efforts.
de Clercq cautioned that great challenges remain in the effort to completely eliminate cholera in what he called Haiti's “fragile environment,” wherein the little infrastructure that existed was further degraded by a series of natural disasters – most tragically, the 2010 earthquake that killed over 200,000 people.
“Every year, we have to deal with new challenges; fortunately last year we did not have major hurricanes, but we cannot be lucky every year,” he said, stressing that only when a plan for country-wide sanitation, clean water and an integrated health system is funded and put in place would the danger be minimized.
Thirty per cent of Haitians have no access to clean drinking water and only 26 per cent have access to improved latrines, he said. In addition, the UN Country Team estimates that 47 per cent of Haitians have no access to health services.
However, de Clercq said, cholera can still be totally eliminated from the country, since the disease has not become endemic, or anchored in the environment. “It is still a transmission from person to person, or from temporary contamination of water points.”
Since the beginning of the epidemic in October 2010, the UN has initiated a system-wide effort to support the Government of Haiti to fight the disease. In December 2012, Secretary-General Ban Ki-moon launched an initiative for the elimination of cholera in Haiti and the Dominican Republic that focuses on prevention, treatment and education, as well as infrastructure planning for the long-term.
That effort, de Clercq said, has engaged the entire UN system, including, among others, the UN Stabilization Mission, known as MINUSTAH, the UN health agency, WHO, the Children's Fund (UNICEF), the Development Fund (UNDP) and the World Food Programme (WFP).
He added that non-governmental organizations have been very supportive of the rapid intervention approach and other elements of the strategy. “It's really an integrated approach within the UN and between the UN and other actors to support the national authorities,” he said.
Asked why the extensive measures so far have not stopped the disease, he commented, “I'm afraid there is no silver bullet for cholera. From the outside, it looks very doable, but in reality, when you're here on the ground with the type of resources we have and the international attention time-span, it isn't easy to address all the huge issues the country has to make progress on,” most of which, he stressed, increase Haiti's vulnerability to cholera.
The UN Secretary-General's Senior Coordinator for the Cholera Response in Haiti, Pedro Medrano, continues to contact donors to obtain the resources needed to eradicate cholera in the country through universal water, sanitation and hygiene coverage, by means of a national plan launched in 2013, for which the Government is appealing for USD 2.2 billion for the next 10 years.
To support the most urgent activities outlined in the Government's plan, the UN is appealing for USD 70 million for the next two years to continue the short-term strategy of containing transmission of cholera, of which USD 34 million has been mobilized so far.
The International Organization for Migration (IOM) and the Haitian NGO DINEPA distribute bleach and water purification tablets to a camp for displaced persons in Port au Prince, Haiti. Photo: MINUSTAH/Logan Abassi (file photo)