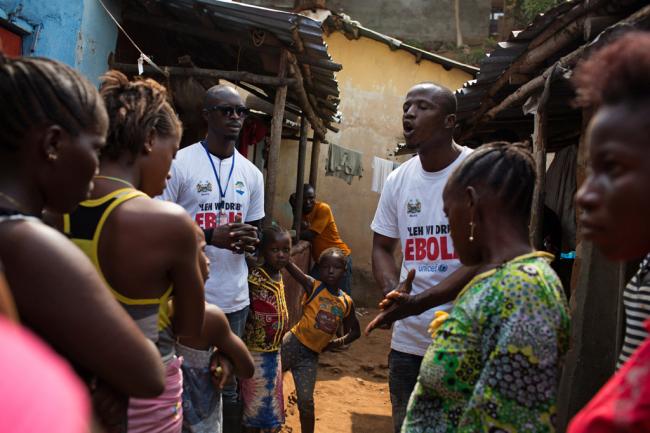 New York, Apr 24 (JEN) With fresh statistics on the Ebola outbreak reflecting a halt in the decline in West Africa, the United Nations on Thursday began a campaign to engage more women â€“ who have been disproportionately affected by the disease â€“ as well as local traditional healers, to encourage communities to become more involved to bring down infection rates to zero.

“The decline in confirmed cases of Ebola virus disease has halted over the last three weeks,” the World Health Organization (WHO) said in its latest update. “To accelerate the decline towards zero cases will require stronger community engagement, improved contact tracing and earlier case identification.” As part of the push to engage more community involvement, the UN Ebola Emergency Response (UNMEER) reported “in view of evidence that women are disproportionately more affected by Ebola (56.7 per cent) than men (43.3 per cent), UNMEER is collaborating with UN Women and the Sierra Leone Association of Journalists to bring women into the mainstream of EVD Response in Sierra Leone through a focus on community, youth, religious and women leaders.” Starting today, there will be country-wide training of journalists on how to better engage women at the community level and women-themed radio programmes, including a simulcast on 41 radio stations in which representatives from UN Women, survivors, and women’s leaders will discuss issues around bringing transmission to a resilient zero, according to UNMEER. UNMEER also reported a campaign to engage communities in early detection of Ebola cases in Guinea, including the sensitization of local traditional healers. According to WHO, more than 26,000 cases of Ebola have been reported in Guinea, Liberia and Sierra Leone, with over 10,800 deaths. The agency also says that 21 new confirmed cases were reported in Guinea, 12 in Sierra Leone and none in Liberia in the latest seven day reporting period. “Community engagement appears to be steadily improving in Guinea and Sierra Leone, but more needs to be done to identify all chains of transmission,” according the UN health agency. Photo: UNICEF/Tanya Bindra