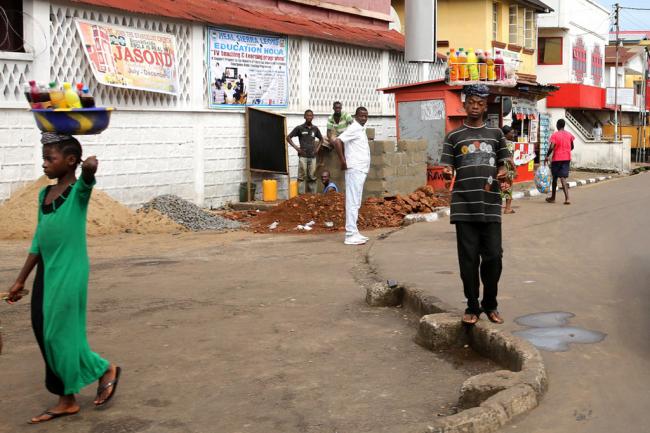 The United Nations on Wednesday appealed for $1 billion needed for the first six months of 2015 to sustain the momentum to stamp out Ebola in West Africa, where ‘the epidemic has started to turn’ in all three of the worst-hit countries – Guinea, Liberia and Sierra Leone.

“We’re beginning to see an overall decline in number of new cases each week,” Dr. David Nabarro, the UN Special Envoy on Ebola, told a news conference in Davos, Switzerland, at the 2015 World Economic Forum, where global leaders from across business, Government, international organizations, academia and civil society are gathered for strategic dialogues on events and trends shaping the world. Valerie Amos, UN Emergency Relief Coordinator, also welcomed the “early signs of reduction of Ebola in all three countries” but noted the need to remain vigilant. And as the Secretary-General of the United Nations [Ban Ki-moon] said on Tuesday , complacency would be our worst enemy,” Amos, who is also the UN Under-Secretary-General for Humanitarian Affairs told reporters. The appeal was launched by Amos and Dr. Nabarro, who are in Davos where there are some 20 scheduled events at the World Economic Forum devoted to the global fight against the Ebola epidemic. “This is an appeal for funds to support the efforts of the national governments of Guinea, Liberia and Sierra Leone as they identify and treat people affected by Ebola, ensure a rapid end to the outbreak, re-establish essential social services and improve people’s food and nutrition security,” according to the appeal. “[It] includes funds needed for enabling nearby countries to reduce their people’s risk of Ebola infection.” Explaining the background to the revised $1 billion funding appeal from January to June 2015, the UN notes that ‘some of the funding has already been raised by an earlier appeal.’ In October 2014, it said, the total financial needs were estimated to be to $1.5 billion through to March 2015. By the end of 2014, $1.3 billion had been raised against this appeal. Approximately $800 million has been spent leaving $500 million available for use now in 2015. Meanwhile in Geneva today, the fourth meeting of the Emergency Committee convened by the Director-General of the UN World Health Organization (WHO) met and recommended maintaining “robust” exit screening in the three affected countries, which is ‘critical for minimizing the risk of exportation of Ebola cases.’ But the Committee reaffirmed the need to avoid unnecessary interference with international travel and trade, noting that more than 40 countries have implemented additional measures, such as quarantine of returning travellers and refusal of entry. “Such measures are impeding the recruitment and return of international responders,” said WHO. “They also have harmful effects on local populations by increasing stigma and isolation, and by disrupting livelihoods and economies.” “The Committee concluded that the primary emphasis must continue to be on ‘getting to zero’ Ebola cases, by stopping the transmission of Ebola within the three most affected countries,” said the agency, adding: “This action is the most important step for preventing international spread. Complacency is the biggest risk to not getting to zero cases. Continued vigilance is essential.”  Photo: World Bank/Dominic Chavez