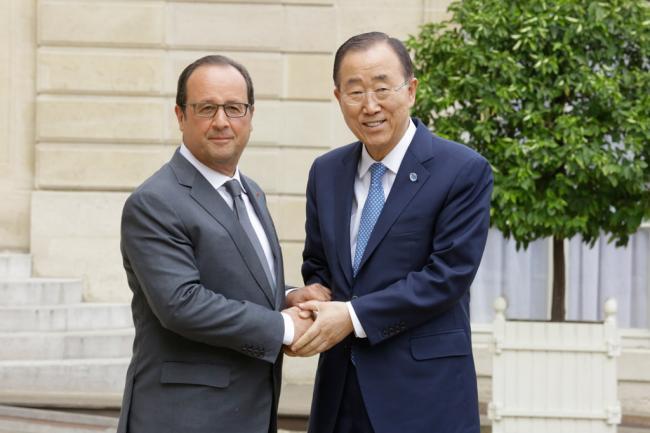 New York, Aug 26 (JEN): In Paris today, United Nations Secretary-General Ban Ki-moon met with the President of France, François Hollande, with whom he discussed a range of issues, including the climate change conference, which is due to start in December (COP-21) in the French capital, as well as the next steps to be taken to ensure an ambitious outcome.

Both men discussed the different ways of engaging Heads of State and Governments on the issue of climate change, including on the margins of the 70th session of the General Assembly in New York in September, as well as at other meetings involving leaders, indicates a read-out. They agreed on the importance of drawing attention to the climate finance package for The meeting of States Parties to the UN Framework Convention on Climate Change (COP-21) “as early as possible,” such as at the meeting of Finance Ministers in Lima in October, while operationalizing the Green Climate Fund and reaching out to all Member States to further accelerate momentum in the coming months. The Secretary-General and the French President also discussed a number of peace and security issues, including the situations in Ukraine, Syria, Libya, as well as the Middle East Peace Process. While they noted progress towards elections and restoring security in the Central African Republic,  Ban stressed his resolve and commitment in addressing issues of misconduct, including sexual exploitation and abuse, by UN peacekeepers. In the aftermath of his visit to Nigeria, the Secretary-General and President Hollande also discussed the threat of Boko Haram across the region and the need to address violent extremism everywhere. UN Photo/Evan Schneider