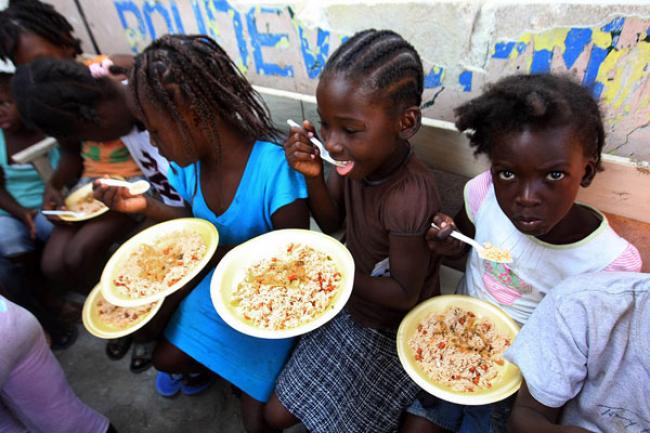 Today, some three million Haitians remain unsure where their next meal will come from. To provide them the essential food they require, about $28 million will be needed in 2015. “Persistent chronic poverty and inequality, environmental degradation and continuing political uncertainty threaten achievements Haitians have made over the past five years,” WFP’s representative in Haiti, Wendy Bigham, warned. In the hours after the quake struck on 12 January 2010, WFP began distributing emergency food to those survivors left in the rubble. Within four months, the agency had provided food for more than 4 million vulnerable Haitians, which helped avert a food crisis. Because of its geography, Haiti is highly prone to natural disasters such as hurricanes, floods, landslides and droughts. Poverty means that even moderate shocks can push people into hunger. Since 2010, WFP has helped create job opportunities for over 200,000 Haitians in cash- or food-for-work projects aimed at stabilizing food security. In Marigot, a community nestled between the Caribbean Sea and the mountains that was hit hard by the earthquake, local farmers have been employed to build hillside stone terraces. In Haitian Creole, Kore Lavi means “supporting life” and that is what WFP is doing under a project that helps improve the nutrition of Haiti’s poorest women and young children, the agency stressed. For example, WFP, with its partners, has been providing flour mixed with vitamins and minerals as well as bulgur wheat, cooking oil and beans. By strengthening nutrition now, vulnerable Haitians will be stronger and healthier the next time a disaster strikes. With the new funds, WFP plans to reach up to 1.2 million highly vulnerable Haitians. It will also support the Government to provide hot meals to almost half a million schoolchildren. Some of the produce for the agency’s projects is bought locally as a way of supporting the country’s farmers. Together with the Ministry of Agriculture, smallholder farmers’ associations are trained and mentored to meet WFP’s local procurement standards.

In Haiti, children in the Port-au-Prince slum of Bel Air enjoy a meal. Photo: MINUSTAH