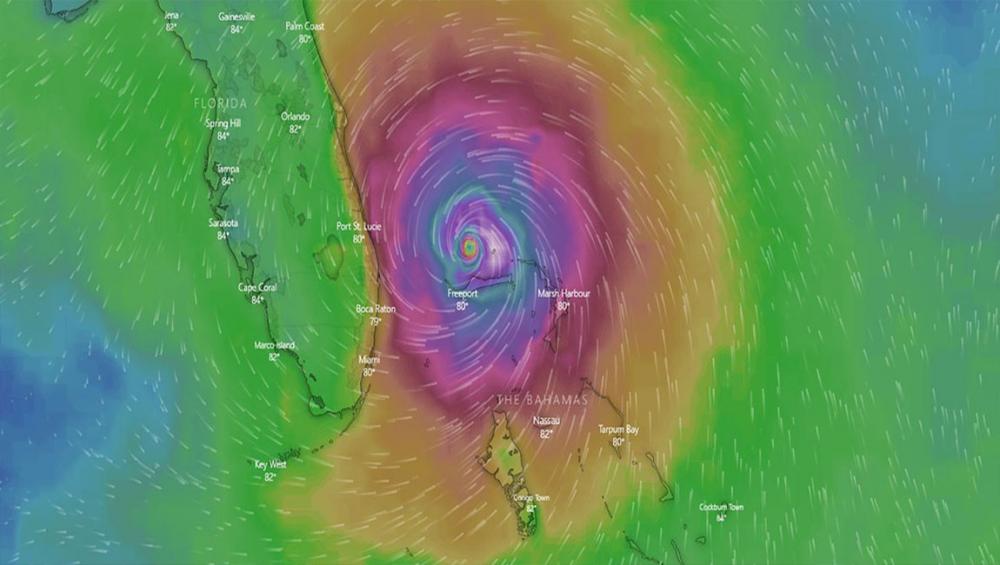 New York, Sept 4 (JEN): Renewed warnings of deadly destruction in the Bahamas caused by Hurricane Dorian have been issued by UN agencies and partners, who said on Tuesday that they’re worried “for every single” person on two of the worst-hit Caribbean islands.

Briefing journalists in Geneva, Jens Laerke from the UN Office for the Coordination of Humanitarian Affairs (OCHA) said that initial assessments from Grand Bahama and the Abaco Islands - where the storm made landfall and is effectively stationary as of Tuesday morning, local time - were “rather catastrophic”.

He added: “As we heard, it made landfall in the Abaco Islands; the population there is a little more than 17,000 people, we are concerned for all of them. It is now over the Grand Bahama, the population there is about 51,000 people and we are concerned for every one of them. The Prime Minister of the Bahamas has said already that five individuals have been confirmed killed as a result of this hurricane.”

Initially classified as a Category 5 hurricane at the weekend when it hit the Bahamas’ north-west with wind gusts of over 320 kilometres per hour, Dorian has now been downgraded two notches.

But it still has the potential to be deadly, regardless of its rating, according to the World Meteorological Organization (WMO).

“It was the strongest on record to make landfall in the Bahamas,” said WMO spokesperson Clare Nullis. “At its peak it had maximum sustained winds of 270 kilometres an hour, which is absolutely huge, with gusts of up to 321 kilometres an hour. It’s life-threatening it’s devastating, it’s now weakened to the equivalent of a Category 3 hurricane. The winds are still devastating, the storm surge is still life-threatening and the rainfall is still torrential.”

Confirming the widespread damage from the high winds and amid reports of storm surges between five and seven metres high, the International Federation of Red Cross and Red Crescent Societies (IFRC) said that more than 13,000 houses had been severely damaged or destroyed - about 45 per cent of all homes on the two islands.

“In terms of needs, we believe that Abaco Island has the most vulnerable population,” said IFRC spokesperson Matthew Cochrane. “There’s a large Haitian community on the island, who will need, we believe, a significant amount of assistance to recover from and rebuild after this storm. We also understand that about 62,000 people across the two islands will need access to clean drinking water.”

Initial assessments carried out by the World Food Programme (WFP) with the Caribbean Disaster Emergency Management Agency (CDEMA) and other humanitarian partners, indicate that Abaco will likely require food for more than 14,000 people and Grand Bahama for over 47,000 people.

With a handful of specialized staff on the ground to provide support in food security, emergency telecommunications and logistics, WFP spokesperson Hervé Verhoosel said that they would support the Government of the Bahamas in “rapidly assessing the damage from the hurricane and in prioritizing needs” over the next three days.

Meanwhile, in response to the “unprecedented storm”, the UN Secretary-General’s Special Representative for Disaster Risk Reduction, Mami Mizutori, expressed her condolences to the people of the Bahamas.

“This is the fourth consecutive year that we have witnessed an extremely devastating Atlantic hurricane season including Category 5 hurricanes like Dorian”, said spokesperson Denis McClean from the UN Office for Disaster Risk Reduction (UNISDR), reading from a statement.

“The sequence cannot be divorced from fact that these last five years have been the hottest ever recorded because of the continuing rise in greenhouse gases in the atmosphere.”

This is an enormous humanitarian and development challenge for the Bahamas. Within the past few years, the Bahamas has been seriously affected by at least three major hurricanes, all Category 4 storms or above. The impact of hurricanes Joaquin, Matthew and Irma on the Bahamas has been reported to have cost approximately $820 million”, he said

windy.com
A graphic visualization of Hurricane Dorian over the Bahamas.