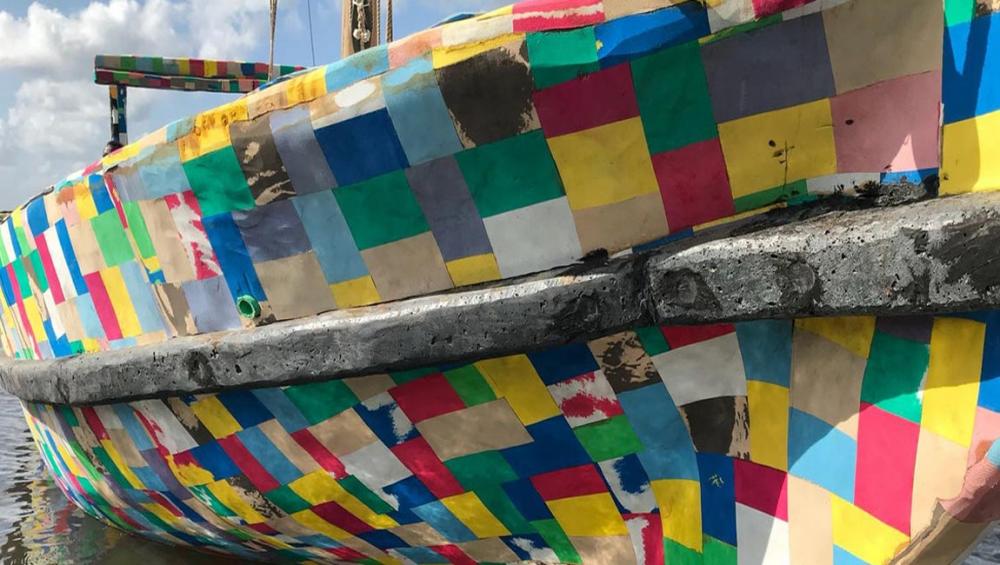 New York : After completing a historic 500km journey from the Kenyan island of Lamu to the Tanzanian island of Zanzibar, the world’s first ever traditional “dhow” sailing boat made entirely from recycled plastic, known as the Flipflopi, has successfully raised awareness of the need to overcome one of the world’s biggest environmental challenges: plastic pollution.

After completing a historic 500km journey from the Kenyan island of Lamu to the Tanzanian island of Zanzibar, the world’s first ever traditional “dhow” sailing boat made entirely from recycled plastic, known as the Flipflopi, has successfully raised awareness of the need to overcome one of the world’s biggest environmental challenges: plastic pollution.

The Flipflopi Project was co-founded by Kenyan tour operator Ben Morison in 2016, and the ground-breaking dhow was built by master craftsmen Ali Skanda, and a team of volunteers using 10,000 tonnes of recycled plastic.

The boat gets its name from the 30,000 recycled flip-flops used to decorate its multi-coloured hull.

Plastics make up 80 per cent of all ocean litter

The UN Environment agency’s (UNEP) Clean Seas Campaign joined forces with Flipflopi for the journey down the East African coast, which began on 23 January, ending on 7 February, with the aim of inspiring citizens from Africa and around the world to become more aware of the dangers of plastic pollution.

The Clean Seas campaign was launched in 2017 to urge governments, businesses and citizens to eliminate major sources of marine litter – microplastics in cosmetics and the excessive, wasteful usage of single-use plastic – by the year 2022. Each year, more than 8 million tonnes of plastic ends up in the oceans, wreaking havoc on marine wildlife, fisheries and tourism, and costing at least $8 billion in damage to marine ecosystems. Up to 80 per cent of all litter in the oceans is made of plastic.

Flipflopi made several stops during the journey, letting local people know what they can do to halt the spread of toxic plastic waste, including the Kenyan coastal towns of Kipini, Malindi and Mombasa.

Workshops were conducted to give community members a better understanding of the consequences of dumping plastic waste into the ocean and show children how they can create useful new objects out of dumped plastic bottles.

During the Flipflopi voyage, every port of call announced historic commitments to fight pollution. One of the most significant was the pledge to close the Kibarani landfill site in Mombasa, which allows toxic water to drain directly into the ocean. Kibarani is now being restored and planted with trees, while waste will reportedly be disposed of at a new site in a more environmentally responsible manner.

Another positive outcome of the campaign has been the decision of 29 businesses, including 22 hotels, to minimize their plastic waste through measures such as banning the use of plastic bottles and straws.

UN Environment’s Clean Seas - Flipflopi expedition, is the latest chapter in Kenya’s push to become a global pioneer in tackling plastic pollution. In August 2017, the country introduced the world’s toughest ban on plastic bags with anyone producing, selling or using a plastic bag, risking imprisonment of up to four years or fines of $40,000.

The next step for Flipflopi will be a journey to the Kenyan capital of Nairobi, where Heads of State, environment ministers, environmental activists, innovators, NGOs, and CEOs of multinational companies will gather for the fourth United Nations Environment Assembly – the world’s highest-level environmental forum – from 11-15 March 2019.