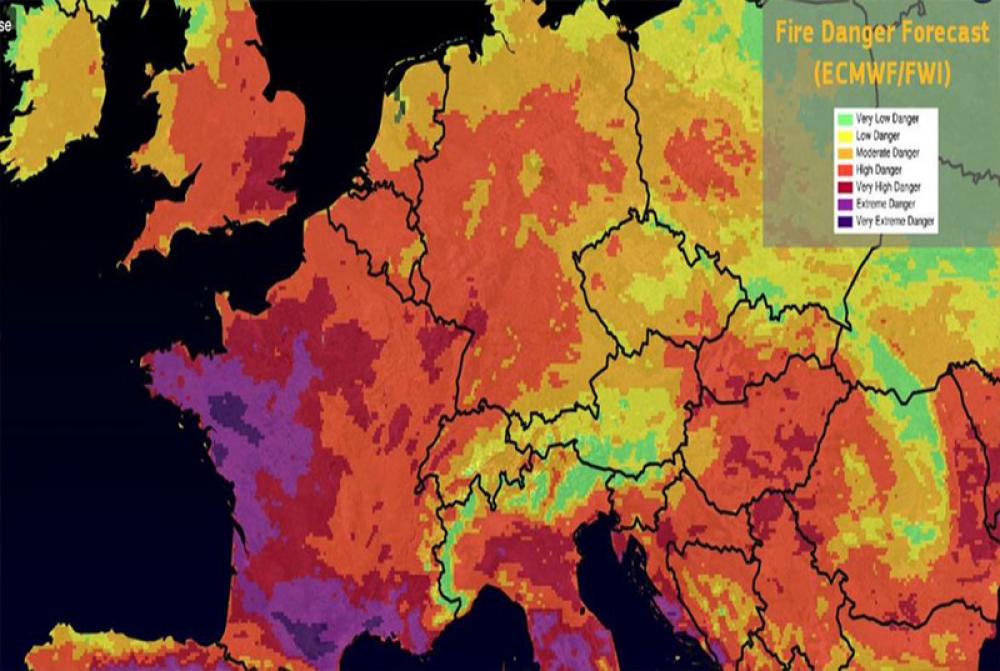 New York: The chances of seeing unprecedented temperatures of 40 degree Celsius (40°C) or more in the UK could be up to 10 times more likely in the current climate than under a “natural climate unaffected by human influence,” the World Meteorological Organization (WMO) declared on Monday.

In a statement, the WMO noted that the UK’s Met Office has, for the first time, issued a “Red Warning” for exceptional heat, and forecast temperatures reaching 40 degrees Celsius (104 Fahrenheit) on Monday and Tuesday.

The current record high temperature in the UK is 38.7 degrees Celsius, which was reached just three years ago.

‘Widespread impacts on people and infrastructure’

“Nights are also likely to be exceptionally warm, especially in urban areas”, said Met Office Chief Meteorologist Paul Gundersen. “This is likely to lead to widespread impacts on people and infrastructure. Therefore, it is important people plan for the heat and consider changing their routines. This level of heat can have adverse health effects”.

“Likewise, the abundant sunshine, high concentrations of certain atmospheric pollutants and stable atmosphere is conducive to episodes of ozone formation near the surface, which has detrimental effects on people and plants,” he continued.

Dr Nikos Christidis, climate attribution scientist at the Met Office, added that a recent study has found that the likelihood of extremely hot days in the UK has been increasing and will continue to do so during the course of the century.

“Climate change has already influenced the likelihood of temperature extremes in the UK”, said Dr. Christidis. “The likelihood of exceeding 40 degrees Celsius anywhere in the UK in a given year has also been rapidly increasing, and, even with current pledges on emissions reductions, such extremes could be taking place every 15 years in the climate of 2100”.

Extreme heat events do occur within natural climate variation due to changes in global weather patterns. However, the WMO points out that the increase in the frequency, duration, and intensity of these events over recent decades is clearly linked to the observed warming of the planet and can be attributed to human activity.

News of the exceptional highs expected in the northern European country broke amid huge wildfires across the southwest of the continent, which have caused hundreds of deaths, and seen thousands of people evacuated from their homes.

In Portugal, temperatures have reached highs up to around 46°C, and red warnings are in effect for much of the country, as hot conditions increase the risk of wildfires.

More than 13,000 hectares of land were on fire in the French Gironde region, and 15 of France’s 96 departments were listed on Red alert and 51 on Orange alert, with residents of those areas urged to be vigilant. The heatwave in western France is expected to peak on Monday, with temperatures climbing above 40 degrees Celsius.

‘Half of humanity in the danger zone’: UN chief

In his video message to a high-level climate event in Germany on Monday, UN chief António Guterres warned that “half of humanity is in the danger zone,” facing floods, drought, extreme storms, and wildfires.

Addressing ministers from 40 nations in the city of Petersberg, Mr. Guterres said that the 2015 Paris Agreement target of limiting global warming to 1.5 degrees Celsius, was already on life support coming out of COP26 last November, and its “pulse has weakened further”.

“Nations continue to play the blame game instead of taking responsibility for our collective future”, declared the Secretary-General, calling on countries to rebuild trust, and come together.