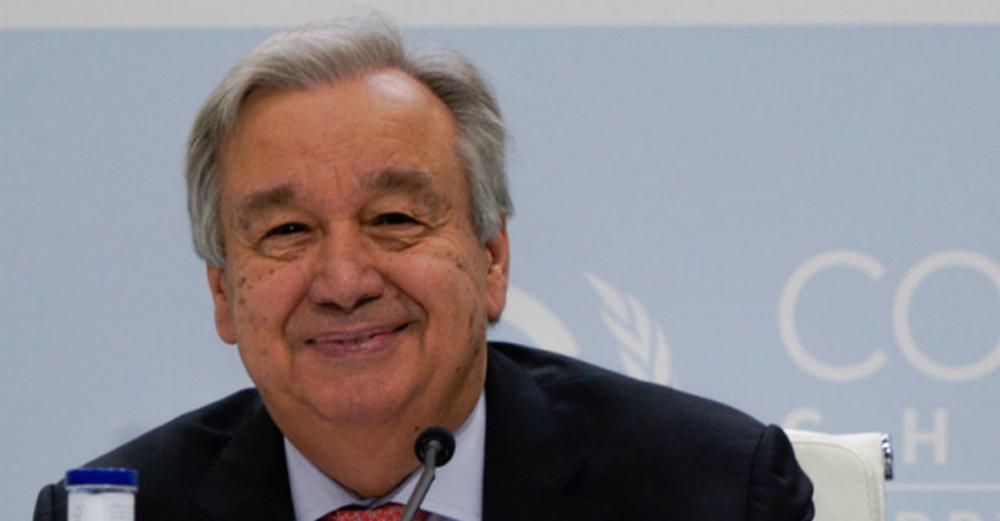 New York: The UN Secretary-General has outlined the “increased ambition and commitment” that the world needs from governments during the coming days of the COP25 UN climate change conference which opens in Madrid on Monday, calling for “accountability, responsibility and leadership” to end the global climate crisis.

“My message here today is one of hope not of despair” said UN chief António Guterres addressing journalists at a press conference in the Spanish capital on Sunday, after revealing the key takeaways from the World Meteorological Organization’s State of the Climate report, due to be published during COP25.

I expect a clear demonstration of increased #ClimateAction ambition & commitment out of #COP25. Leaders of all countries need to show accountability & responsibility. Anything less wold be a betrayal of our entire human family and all generations to come.

“The last five years have been the hottest ever recorded. Sea levels are at the highest in human history”, he said, listing the benchmarks which indicate that “the point of no return is no longer over the horizon. It is in sight and is hurtling towards us”.

But scientists have provided a roadmap away from that point, which will allow us to limit global temperature rise to just 1.5 degrees Celsius above pre-industrial levels, reach carbon neutrality by 2050 and cut greenhouse gas emissions by 45 per cent from 2010 levels, by 2030.

Efforts so far have been “utterly inadequate” and the Paris Agreement commitments still mean a rise of 3.2 degrees unless more drastic action is taken, said the UN chief, but 1.5 degrees “is still within reach.”

“The technologies that are necessary to make this possible are already available”, he added, “the signals of hope are multiplying. Public opinion is waking up everywhere. Young people are showing remarkable leadership and mobilization.”

He said digging and drilling had to stop, replaced by renewable energy and nature-based solutions to drastically slow climate change.

“In the crucial 12 months ahead, it is essential that we secure more ambitious national commitments – particularly from the main emitters – to immediately start reducing greenhouse gas emissions at a pace consistent to reaching carbon neutrality by 2050.”

Guterres said at least $100 billion dollars must be made available to developing countries for mitigation and adaptation and to take into account their “legitimate expectations to have the resources necessary to build resilience and for disaster response and recovery.”

The “social dimension” of climate change must also be paramount, so that national commitments include “a just transition for people whose jobs and livelihoods are affected as we move from the grey to the green economy.”

In conclusion he noted: “We are in a deep hole and we are are still digging. Soon it will be too deep to escape.”

Mark Carney to be new Special Envoy for Climate Action

The Secretary-General announced on Sunday that the current head of the Bank of England, Mark Carney, is to become the UN’s new Special Envoy for Climate Action.

Describing the Canadian as “a remarkable pioneer in pushing the financial sector to act on climate”, Mr. Guterres said the new envoy would be focusing on ambitious implementation of action, especially shifting markets and mobilizing private finance, towards limiting global warming to the key 1.5 degrees mark. Mr. Carney replaces former New York mayor and billionaire philanthropist, Michael Bloomberg, who has embarked on a US presidential run.

A statement from the Spokespersons’ office said his tasks would include “building the frameworks for financial reporting, risk management and returns in order to bring the impacts of climate change to the mainstream of private financial decision making and to support the transition to a net zero carbon economy.”

The Bank of England Governor has held numerous positions in finance in both the private and public sectors and will become a member of UN staff at the point at which he ceases to work for the Bank.  He also served, from 2011 to 2018, as Chair of the Financial Stability Board and Governor of the Bank of Canada from 2008-2013.

“The Secretary-General will count on Mark Carney to galvanise climate action and transform climate finance”, as the UN looks to next year’s 26th Conference of the Parties (COP26), due to take place in Glasgow, Scotland.