Environment/Science
Climate Change
Failing to agree climate action would ‘not only be immoral’ but ‘suicidal’, UN chief tells COP24 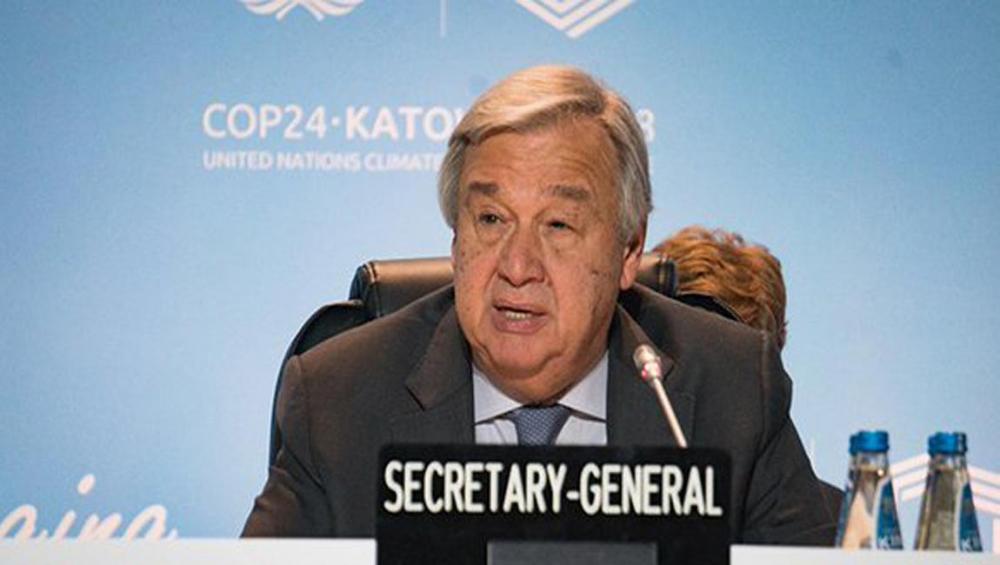 New York: With roadblocks continuing at the COP24 climate change conference over how to implement the  historic 2015 Paris Agreement, United Nations chief António Guterres returned to Poland on Wednesday, to challenge the more than 100 Government leaders gathered in Katowice to find consensus and “finish the job.”

“In my opening statement to this conference one week ago…I warned that climate change is running faster than we are and that Katowice must — in no uncertain terms — be a success, as a necessary platform to reverse this trend,” said Secretary-General Guterres.

Since 2 December, the conference has brought together thousands of climate action decision-makers, advocates and activists, with one key objective: adopting global guidelines for the 197 parties of the 2015 Paris Agreement, when countries committed to limiting global warming to less than 2°C – and as close as possible to 1.5° – above pre-industrial levels.

“Key political issues remain unresolved,” said Guterres. “This is not surprising—we recognize the complexity of this work. But we are running out of time,” he warned, referring to the alarming special report on global warming issued in October by the Intergovernmental Panel on Climate Change (IPCC).With only three days left at the conference for the negotiations, the UN chief regretted that “despite progress in the negotiating texts, much remains to be done”. On Wednesday, given the complex state of discussions, the Polish Presidency of COP24 proposed a text to act as a “new basis for negotiations”.

“Over the last 10 days”, he said, addressing the country delegations which are locked in negotiations, “many of you have worked long, hard hours and I want to acknowledge your efforts. But we need to accelerate those efforts to reach consensus if we want to follow-up on the commitments made in Paris.”

He called on negotiators to boost their ambition, with regards to “predictable and accessible financial flows for the economic transition towards a low-emission and climate-resilient world.”

The Secretary-General reminded the audience that developed countries had a financial obligation to support the efforts of developing countries, as established by the UN Climate Change Convention (UNFCCC), under which the Paris Agreement falls, and which was signed in 1992, more than 25 years ago.

“It’s very difficult to explain to those suffering from the effects of climate change that we have not managed to find predictable support for the actions that must be taken,” he remarked.

Guterres hailed various financial announcements made since the beginning of COP24, including by the World Bank, multilateral development banks, and the private sector. However, he urged developed nations to “scale up their contributions to jointly mobilize $100 billion annually by 2020”, as laid out three years ago in Paris.

Balance the responsibilities 'of all countries' to beat climate change

In addition to increased resources, the UN Secretary-General also called for the development of a “flexible but robust set of rules” to implement the Paris Agreement – as 2018 was set by the UNFCCC parties themselves, as the deadline for these guidelines, so countries can move forward with climate action in a transparent way.

“Countries have different realities, different capacities and different circumstances,” noted the UN chief, as he explained that “we must find a formula that balances the responsibilities of all countries” and that is “fair and effective for all”.

To achieve this, Guterres stressed the importance of building trust through a “strong transparency framework to monitor and assess progress on all fronts: mitigation, adaptation and provision of support, including finance, technology and capacity building”.

The UN chief said we have the know-how, as well as “incredible momentum from all segments of society” adding that “what we need, is the political will to move forward”.

Challenging the delegates and ministers to overcome their national preferences and work “together” and “finish the job” with raised ambition “on all fronts”, Guterres concluded: “To waste this opportunity in Katowice would compromise our last best chance to stop runaway climate change. It would not only be immoral, it would be suicidal.”