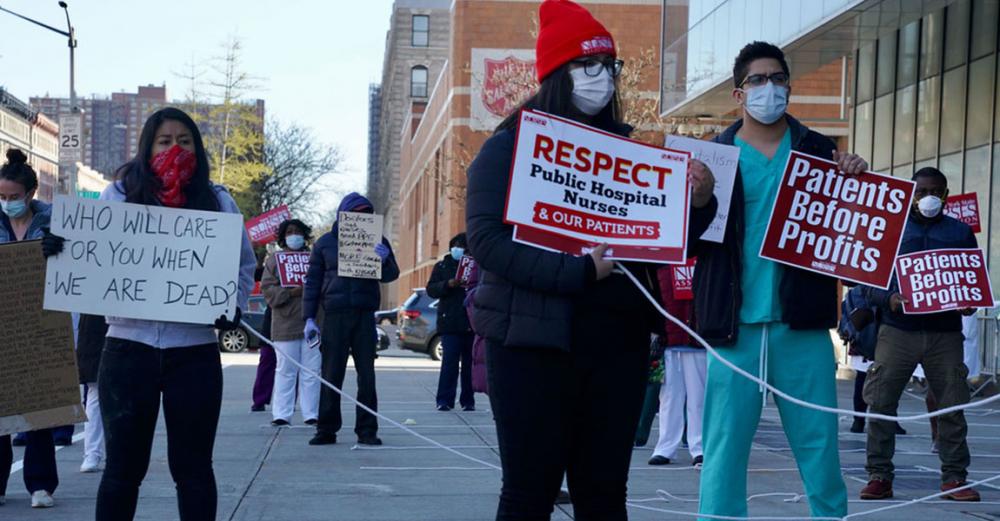 New York : The rapidly intensifying economic effects of COVID-19 on the world of work are proving to be far worse than the 2008-9 financial crisis, with cutbacks equivalent to nearly 200 million full-time workers expected in the next three months alone, the UN labour agency said.

The warning comes almost three weeks after the International Labour Organization (ILO) predicted that 25 million jobs were threatened by the new coronavirus.

According to the agency, the latest dire assessment reflects the full or partial lockdown measures affecting almost 2.7 billion workers – four in five of the world’s workforce.

Speaking in Geneva via videoconference on Tuesday, ILO Director-General Guy Ryder noted that at the start of the year – before COVID-19 spread worldwide - global unemployment already stood at around 190 million.

With the additional shock of the virus, it was “obvious” that the world of work is suffering an “absolutely extraordinary fall” because of the effects of the pandemic and the measures taken to deal with it, he added.

Workers in four sectors that have experienced the most “drastic” effects of the disease and falling production are: food and accommodation (144 million workers), retail and wholesale (482 million); business services and administration (157 million); and manufacturing (463 million).Worst affected sectors

Together, they add up to 37.5 per cent of global employment and this is where the “sharp end” of the impact of the pandemic is being felt now, the ILO chief added.

Frontline workers ‘must be kept safe’

Taking a moment to reflect on the world’s 136 million health and social professionals who are working in the frontline of the fight against the virus, Mr Ryder underscored that for them, the biggest potential impact was contracting COVID-19 in the workplace.

“We need to make sure that those who are at work are adequately protected…that they have the right types of protection”, he insisted.

Although all regions of the world are suffering from the fallout of COVID-19, Arab States and Europe have seen the worst impact on employment in percentage terms.

The biggest losses numerically are in Asia-Pacific States, the most populous region of the world.

Overall, for the second quarter of 2020 - from April to June - ILO believes that working hours are likely to decline by 6.7 per cent.

All areas of world and all workers affected

“No matter where in the world or in which sector, the crisis is having a dramatic impact on the world’s workforce”, ILO said in its latest report. “Policy responses need to focus on providing immediate relief to workers and enterprises in order to protect livelihoods and economically viable businesses, particularly in hard-hit sectors and developing countries.”

An additional concern is the fact that in low and middle-income countries, the worst-hit industries and services have a high proportion of low-wage workers in informal employment, with limited access to health services and State welfare safety nets.

“Without appropriate policy measures, workers face a high risk of falling into poverty and will experience greater challenges in regaining their livelihoods during the recovery period”, ILO said in its latest report on the situation.

It underscored that around two billion people work informally, most of them in emerging and developing countries, and that “tens of millions” of informal workers have already been affected by COVID-19.

In urban areas, moreover, these workers also tend to work in economic sectors that “not only carry a high risk of virus infection but are also directly impacted by lockdown measures”: waste recyclers, street vendors and food servers, construction workers, transport workers and domestic workers.

Highlighting the impacts already being felt in India, ILO pointed out that with its share of almost 90 per cent of people working in the informal economy, about

Current lockdown measures there have impacted these workers significantly, forcing many of them to return to rural areas, ILO explained, adding that Brazil and Nigeria had a similar level of informal employment as India, and faced the same risks.

Agriculture yet to feel worst effects

Although the economic impact has not yet been felt in agriculture, the largest sector in most of developing countries, risks of food insecurity are now “emerging”, ILO said.

This is owing to containment measures, including border closures. “Over time, workers in this sector may be increasingly impacted, particularly if the virus spreads further into rural areas,” it explained.

Given the fast-evolving nature of the situation - described by ILO as the most severe crisis since the Second World War, in common with UN Secretary-General António Guterres – the agency underscored its uncertainty about the longer-term impacts.

Much depends on the action taken by Governments to soften the blow by ensuring the conditions for a prompt, job-rich recovery once the pandemic is under control, Mr. Ryder said.

Welcoming the fiscal stimulus measures already agreed on by the G20 group of industrialised nations, the ILO chief called for “much more targeted interventions” for businesses that were “viable in any normal circumstances”.

It was crucial that these enterprises were in turn able to sustain their employees, he insisted, as experience of past crises “shows just how important that type of intervention is in the longer term, particularly in terms not only of surviving, but of emerging from the crisis”.

ILO’s four-pillar post-COVID recovery priorities are: stimulating the economy and employment, supporting enterprises, jobs and incomes, protecting workers in the workplace and relying on social dialogue for solutions.

Giles Clarke
Nurses and healthcare workers outside at a hospital in New York City demand better protection against the COVID-19 virus.