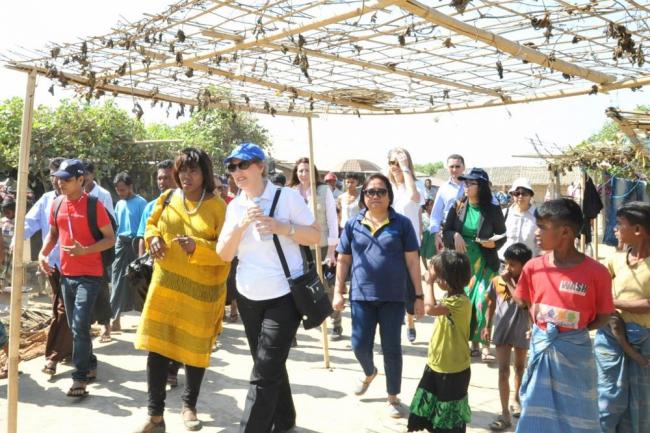 New York, Mar 14 (JEN): The United Nations remains committed to helping Myanmar achieve its humanitarian and development needs in order to boost living standards for all its citizens, top UN officials have declared during their visit to the Asian country.
“Myanmar is in the midst of a number of complex political, administrative, and economic reforms and peacebuilding processes. There are many challenges, and the country has experienced both progress and setbacks in recent years,” the Administrator of the UN Development Programme (UNDP), Helen Clark, stated in a news release.

She said, “UNDP is committed to its work on strengthening governance and to working through its rights-based approaches to support the attainment of higher levels of human development for all in Myanmar.”

During a two-day visit to Myanmar this week to emphasize the importance of ensuring the delivery of humanitarian assistance and support for sustainable development, Clark and the Executive Director of the World Food Programme (WFP), Ertharin Cousin, met with Government officials in the capital of Nay Pyi Taw.

The two UN officials also travelled to the city of Sittwe in Rakhine state where communities remain polarized amid ongoing sectarian tensions. The area is the scene of continuing inter-communal conflict and internal population displacements where “humanitarian and development needs are most acute,” according to the news release.

In Rakhine, UNDP is providing development assistance and working with communities in 63 villages to improve livelihoods and strengthen social cohesion while also investing in developing the capacity of local governments to improve public administration and people-oriented service delivery.
Meanwhile, as the world’s largest humanitarian organization, WFP has been providing life-saving food assistance to over 128,000 internally displaced persons in the state since 2012.

“The path to development runs through the achievement of zero hunger,” Cousin said.
She added, “WFP is committed to working with the Government and our partner organizations starting with UNDP to support Myanmar’s transformational goal of reaching middle-income country status by 2030.”

Meanwhile, the UN Office of the High Commissioner for Human Rights (OHCHR) today voiced concern about the arrest of more than 100 students and other protestors following their demonstrations in Latpadan, in the southern Bago Region on Tuesday.
Although many have since been released, the majority still remain detained in Tharawaddy prison with an estimated 60 of them charged under various laws.

In Geneva, OHCHR spokesperson Ravina Shamdasani told reporters that the UN was concerned about reports that the police had used “excessive and disproportionate force” against the protestors.

“We urge the Government to unconditionally release all those detained for the exercise of their rights to peaceful assembly and freedom of expression and to amend the laws that place unnecessary and disproportionate restrictions on people’s rights,” Shamdasani said.