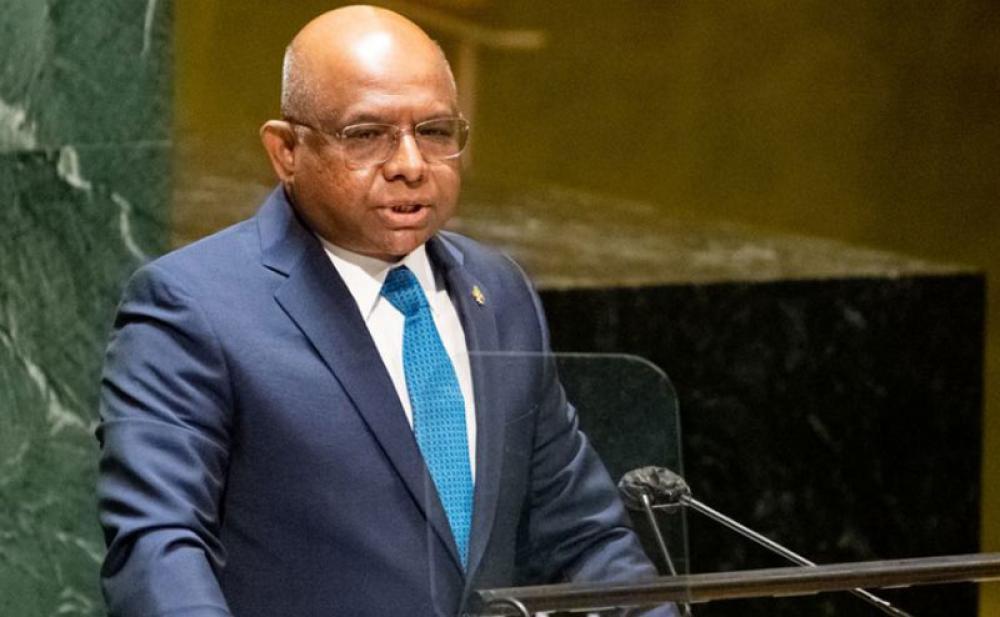 New York: As fighting escalates in Ukraine, UN Member States met on Monday for a rare emergency special session of the General Assembly to discuss the crisis.

Assembly President Abdulla Shahid underscored that the military offensive launched by Russia five days ago was a violation of the integrity and sovereignty of Ukraine.

An affront to UN principles

Mr. Shahid cited the UN Charter, the Organization’s founding document, which outlines a world where countries settle disputes by peaceful means, without the threat or use of force.

“The ongoing military offensive is inconsistent with this. It is an affront to the founders of this Organization and everything it stands for,”â€¯he said.

Countries observed a minute of silence during the rare emergency special session, which followed a meeting by the Security Council on Sunday.

Council members voted in favour of the General Assembly convening after Russia vetoed a resolution on Friday that would have deplored the assault on Ukraine.

The General Assembly has only held 10 emergency sessions since 1950, in line with the adoption of resolutionâ€¯377A(V), widely known as ‘Uniting for Peace’.

The resolution gives the Assembly power to take up matters of international peace and security when the Security Council is unable to act due to unanimity among its five permanent members – China, France, the United Kingdom, the United States, and Russia – who have the power of veto.

“As we convene here in the General Assembly, negotiators from both sides are holding talks in Belarus,” Mr. Shahid told ambassadors.â€¯

“This offers a ray of hope. We pray that these talks will calm down tempers and pave way to peace.”

Addressing the UN membership, Secretary-General António Guterres stated that the fighting in Ukraine must stop.

The bombardment of cities such as the capital, Kyiv, has forced people to seek shelter, including in subway stations.â€¯  Roughly half a million Ukrainians have also crossed the country’s borders.

Civilians, including children, have been killed in the violence.

“Enough is enough,”â€¯the Secretary-General said.â€¯â€¯â€¯“Soldiers need to move back to their barracks.â€¯Leaders need to move to peace.â€¯Civilians must be protected.â€¯ International humanitarian and human rights law must be upheld.”

The world is facing what is a tragedy for Ukraine, he added, but also a major regional crisis with potentially disastrous implications for all.

"Yesterday, Russian nuclear forces were put on high alert. This is a chilling development. The mere idea of a nuclear conflict is simply inconceivable. Nothing can justify the use of nuclear weapons," he said.

Mr. Guterres underlined the UN’s commitment to Ukraine, reminding that last week he had allocated $20 million from a UN humanitarian fund to support emergency operations, in addition to appointing a Crisis Coordinator for the country.

“At the same time, we are bringing together partners, in and outside the country – and surging personnel into the country,” he continued.

The UN will also launch two coordinated emergency appeals for Ukraine and the region on Tuesday.

One will address escalating humanitarian needs inside the country, including rising internal displacement, while the other will respond to the needs of people who have fled elsewhere.

Ukraine's Ambassador, Sergiy Kyslytsya, remarked that for the first time since the UN was established, a full-fledged war was unfolding in the centre of Europe.

Some 352 Ukrainians, including 16 children have been killed to date, he reported, while more than 2,000 were injured.

He said now is the time to help his country.

“If Ukraine does not survive, international peace will not survive,” Mr. Kyslytsya told the General Assembly.

Speaking through an interpreter, Russian Ambassadsor Vasily Nebenzya said the actions of his country are being “distorted and thwarted”, with media and social networks proliferating what he called “these lies”.

The goal of the special military operation is to protect people in Luhansk and Donetsk, two regions in eastern Ukraine, “who for eight years were subject to torment and genocide by the Kyiv regime,” he said.

“To that end, there is a need to demilitarize and de-nazify Ukraine.”

Mr. Nebenzya said Russia believes the UN can play a role in addressing the Ukrainian crisis by helping “to bring stakeholder positions closer together and eradicate the causes of conflict.”

Some 100 countries are expected to address the General Assembly, which is scheduled to vote on a draft resolution on Ukraine, tentatively expected on Wednesday.

Although Assembly resolutions are non-binding, they are considered to carry political weight as they express the will of the wider UN membership.

In the interim, further information on the special emergency session can be found at UN Meetings Coverage.