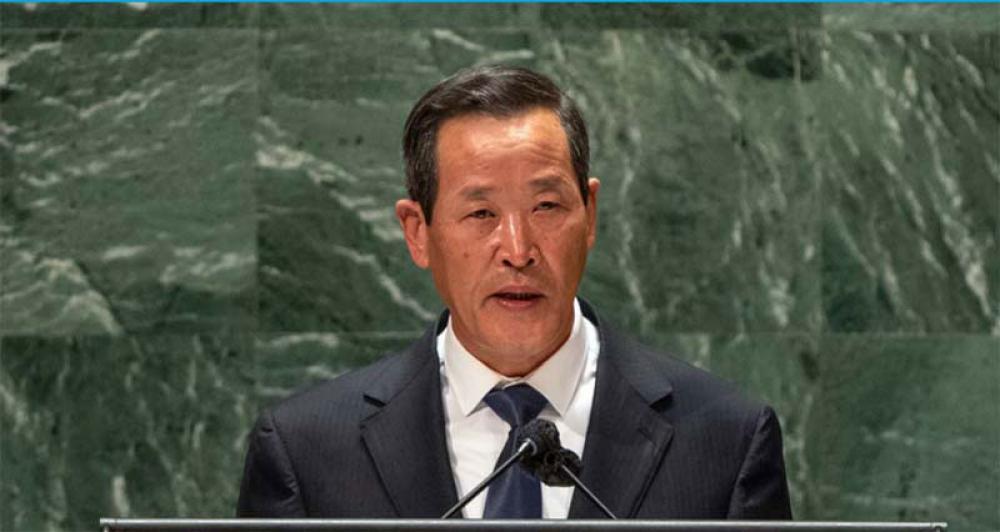 New York: The Permanent Representative of the Democratic People’s Republic of Korea to the United Nations, Kim Song, said that if the United States “shows its bold decision to give up its hostile policy”, his country is “prepared to respond willingly at any time.”

“But it is our judgment that there is no prospect, at the present stage, for the US to really withdraw its hostile policy towards the DPRK,” he added.

The Ambassadorâ€¯was speaking on the sixth, and final day of the high-level week of theâ€¯General Assembly.â€¯After being held virtually last year due theâ€¯coronavirusâ€¯pandemic, this year’s gathering featured “hybrid” activities that included leaders in person along with virtual participants.â€¯â€¯â€¯

For Mr. Song, it is “the desire of the international community to see peaceful resolution of the issue of the Korean peninsula in the interests of the Korean nation.”

Three decades since the end of the Cold War, he said, the peninsula “is still in a vicious cycle of ever-looming aggravation of tension and confrontation.”

The ambassador argued that the “main root cause lies in the hostile policy towards the DPRK”, mostly from the United States.

“Worse still, they have a misconception that the US has become hostile towards the DPRK due to the nuclear issue,” he said, but the United States has been “antagonizing the DPRK for more than 70 years.”

For the Permanent Representative, “the possible outbreak of a new war on the Korean peninsula is contained not because of the US’s mercy on the DPRK.”

“It is because our State is  a growing reliable deterrent that can control the hostile forces in their attempts for military invasion,” he said.

“We have stored reliable power to defend ourselves by exerting continuous efforts, with a clear insight into the demand of the times which necessitates us to possess sufficient might for national defense in the face of the geopolitical environment and the balance of power on the Korean peninsula as well as ever-straining international relations.”

He stressed, however, that his country does not wish to use this power against any nation. “In other words, we would never violate nor endanger the security of the US, South Korea and our neighboring countries,” he explained.

Pointing to the COVID-19 pandemic, global warming and conflicts all over the globe, he said “it is no exaggeration to say that the international community is faced with the most serious crisis since the founding of the UN.”

To address these challenges, he proposed changes to the United Nations system, particularly the Security Council.

“[It] does not say a single word about the reckless arms buildup and war criminal acts by specific countries, such as the US, and its following forces. It instead finds faults with the just self-defensive measures of the DPRK at every chance,” he said.

To reform the Council, he proposed to Member States that the “representation of developing countries, which make up majority in the UN, should be increased.”

For him, it is also “imperative” that the resolutions adopted at the Security Council could be rejected by a contravening resolution from the General Assembly.

Next, he asked the international community to “revitalize the work of the UN based on the principles of sovereign equality and respect for equal rights and self-determination of the people.”

Mr. Song also pointed to a world marked by “chaos, disorder, bloodshed and violence” that is caused by foreign intervention.

The Ambassador said that, to this day, some countries “try to unilaterally impose the western values and ‘rules based international order’ upon sovereign states behind the signboard of ‘defending democracy’ and ‘protecting human rights’."

For him, “such an attempt to interfere in the internal affairs is a gross violation of the principle of sovereign equality.”