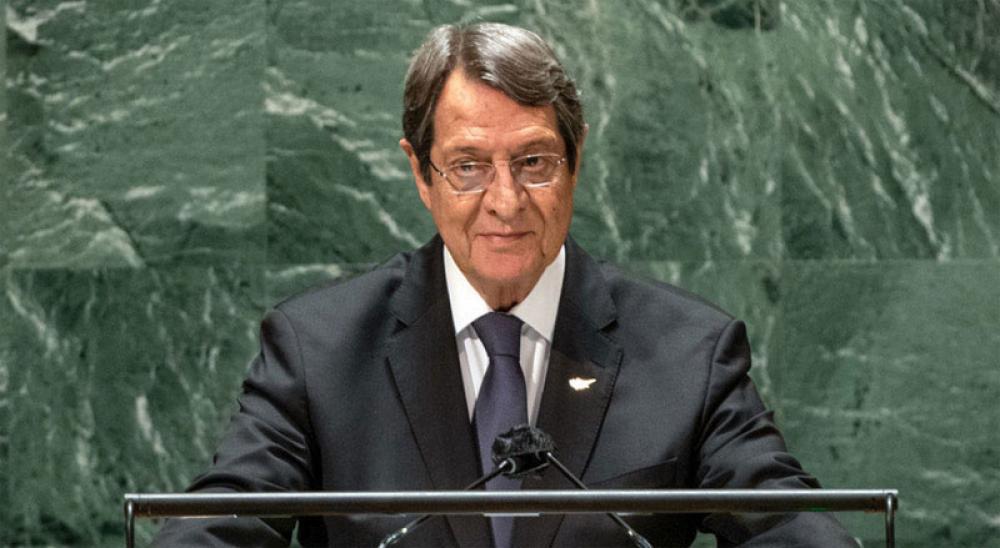 Cyprus President Nicos Anastasiades told UN Member States on Friday that he is determined “to set the negotiation process” with Turkey “back on track”, on the basis of the UN framework and the agreement reached in 2019.

Cyprus has been divided for more than four decades, and leaders from its Greek and Turkish communities last met in 2019 at an UN-facilitated conference in Berlin.

He stressed that there is only one plan: to reach a settlement on the basis of a bi-zonal, bi-communal federation with political equality, as set out in relevant UN Security Council resolutions and in line with the principles on which the EU is founded.

“A settlement that will lead to a functional and viable State, without the obsolete System of Guarantees, the right of intervention, the presence of foreign troops, or any kind of foreign dependencies. A settlement that will equally benefit all Cypriots, Greek Cypriots and Turkish Cypriots, fully respecting their human rights and contributing to the peace and stability of the region.”

Mr. Anastasiades was one of the speakers on the fourth day of the high-level week of theâ€¯General Assembly.â€¯After being held virtually last year due theâ€¯coronavirusâ€¯pandemic,â€¯this year’s gathering will featureâ€¯“hybrid”â€¯activitiesâ€¯that will include leaders in person along with virtual participants.â€¯

Mr. Anastasiades said that he stood in the General Assembly Hall “representing a country which, regrettably, still endures the consequences of the blatant violation of the fundamental principles of the United Nations, as a result of the 1974 illegal military invasion of Turkey and the ongoing occupation.”

He said it was not hist intention “to engage on a blame game,” but disputed the Turkish claim that the efforts for a compromise have been exhausted.

“A compromise becomes even more difficult to reach when new ideas put forward by our side, as asked by the Secretary-General and in an effort to move the process forward, are blatantly rejected,” he added.

Among his proposals, he pointed to a decentralization of the exercise of powers, the option of a parliamentary system with a ceremonial Head of State and rotating Prime Minister and, more recently, an invitation to the Turkish Cypriots to rejoin the state institutions.

A sense of disappointment

The Cypriot president highlighted “a sense of disappointment” among the people of the world, saying it is caused by “a widening gap between words and deeds, between the auspicious declarations and commitments which are made and the results of the measures that we promise to deliver.”

Speaking about major global challenges, he argued that a “collective and shared failure” has disappointed “many people across the world, whose fundamental human rights and dignity are not adequately protected.”

For him, to solve these problems, here is only one answer: “Multilateralism, tangible solidarity and stronger partnerships, based on a positive agenda.”

He addressed the issue of climate change, citing the “alarming projections” for his region, and informed that Cyprus undertook a coordinating role for developing a Regional Action Plan.

He also spoke about the most recent developments in Afghanistan, telling Member States they “share a collective responsibility to uphold international humanitarian law, particularly as regards the protection of women and minorities.”

“We also need to ensure that Afghanistan does not become a safe haven for terrorism and extremism, or a breeding ground for organized crime, weapons and drug trafficking and renewed waves of illegal migration,” he added.

Lastly, he argued that global leaders “have more than ever a moral, ethical and political duty to promote the essence of human civilization, unite our strength to maintain international peace and security and establish conditions that can bring prosperity and welfare to all.”

“I do hope that next year we will be in a position to be proud of ourselves because we have taken significant steps towards fulfilling that vision,” he concluded.