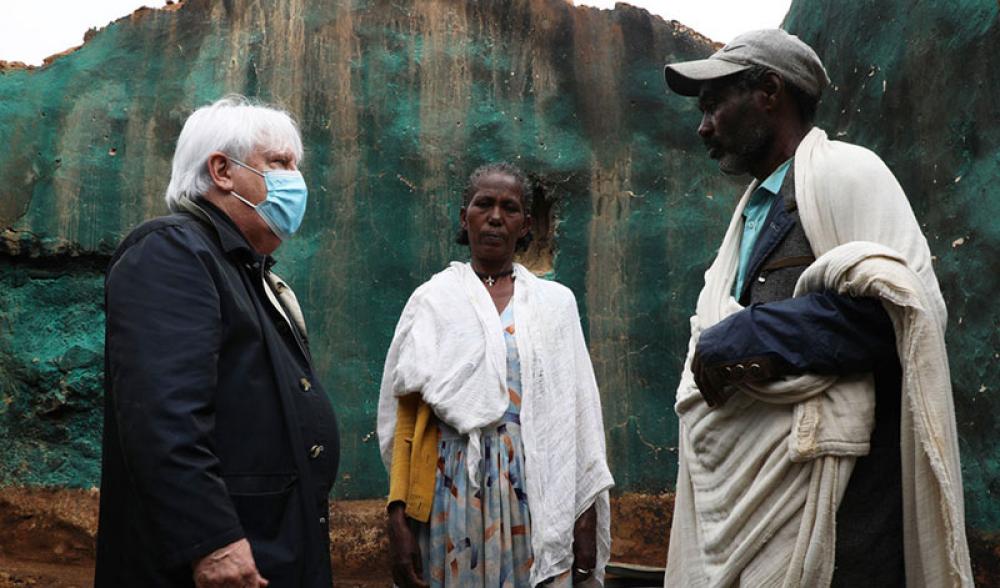 New York: The new UN Emergency Relief Coordinator ended a six-day mission to Ethiopia with a fresh push to get badly needed food and other supplies into the embattled Tigray region.

“We need to change the circumstances that have led to the slow movement of aid – we need the conflict to stop”, Martin Griffiths, who also heads the Office for the Coordination of Humanitarian Affairs (OCHA), said on Tuesday evening.

More than 5.2 million people across Tigray, amounting to more than 90 per cent of the region's population, now require life-saving assistance, according to OCHA.

The nine-month conflict that erupted in Tigray between federal troops and forces loyal to the northern region’s rulers has spilled into neighbouring Amhara and Afar regions, where humanitarian needs are also surging.

Amhara is experiencing ongoing regional and ethnic conflicts, flash floods and food insecurity, which is increasing the number of internally displaced persons in the Central Gondar and Awi zones.

And across the Amhara-Tigray regional border there are an estimated 100,000 internally displaced people in various pockets.â€¯

On the final day of his visit, Mr. Griffiths met in the Ethiopian capital, Addis Ababa, with the country's Deputy Prime Minister and Foreign Minister Demeke Mekonnen Hassen as well as agency heads, non-governmental organizations and OCHA staff to discuss the country’s downward spiraling situation.

As part of his first official mission since assuming office in mid-July, the Emergency Relief Coordinator also spent two days in Tigray, where he saw the dire situation first-hand.

“I met with people in Tigray who lost everything they had after they had to flee their villages or towns, leaving behind their houses and farms”, he said.

In Hawzen, he visited a family whose house was burned and crops were looted.

“It was heart-breaking to see the scale of devastation and families who, to this day, do not have a place to live or food to put on their table,” said the humanitarian chief.

In Mekelle and Freweyni, he spoke with women who had endured “unimaginable violence”, including some who reported weeks of rape.

Although these women need comprehensive and holistic services, Mr. Griffiths lamented that this is unavailable as most health centres are not functional.

During his visit to a hospital in Hawzen, he said, “almost nothing but the walls were left untouched; all equipment and medicines have to be replaced”.

And the disruption of essential services, including access to communication, fuel and the banking system is compounding the desperate situation.â€¯â€¯

According to news reports, the humanitarian chief denounced accusations by Ethiopian Government officials saying that aid workers were biased in favour of the rebels in Tigray.

“Blanket accusations of humanitarian aid workers need to stop, they need to be backed up by evidence if there is any and, frankly, it's dangerous," he said.â€¯

As hundreds of thousands suffer from famine, Mr. Griffiths also called for desperately needed aid to be allowed into the mountainous region .

“We need 100 trucks a day going into Tigray to meet humanitarian needs”, he said, adding that the number was a “calculated need” and not “over-estimated”.

He also reported that in recent days, 122 trucks made it into the fragile region.â€¯

Meanwhile as they scale up response efforts in Amhara and Afar, humanitarian organizations are also assisting  million facing conflict, displacement and drought throughout Ethiopia.

The Emergency Relief Coordinator upheld as his “highest priority” that every Ethiopian who needs assistance receives it.

At the same time, UN agencies are supporting OCHA partners and Government counterparts throughout Amhara.

But OCHA warned that the limited humanitarian presence in the region has rendered the response insufficient and that emergency shelter, food and non-food items remain key priorities along with the pre-positioning of health, nutrition, shelter, and supplies.

Last week the UN Children's Fund (UNICEF) warned that more than 100,000 children in Tigray could suffer life-threatening malnutrition in the next 12 months, a 10-fold increase over normal numbers.