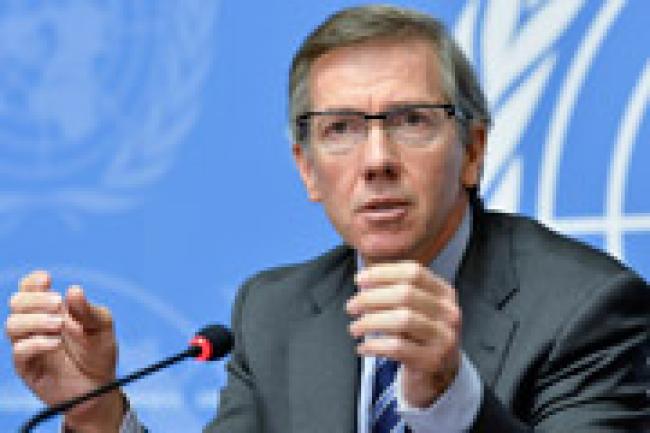 New York, Jan 15 (JEN) The top United Nations official in Libya, Bernardino LÃ©on, has said today that a new round of UN-led political talks in Geneva to bring peace to the country represent the start of a â€œlong processâ€, aimed at bringing an end to fighting in the country and to reach a political settlement.

“This is going to take time,” said Léon, the Special Representative of the Secretary-General and head of the UN Support Mission in Libya (UNSMIL), as he briefed journalists in Geneva. “We are not expecting to have a breakthrough on Thursday   or the day after on Thursday  . There is a gap between the parties, which is becoming more complicated. There is more fighting on the ground, so we will try to facilitate these talks and to help them to reach common ground. But it is not going to be easy.” After the first round of peace talks stalled in October last year, Léon launched a lengthy consultation process during which he travelled through the country and met with many different Libyan stakeholders. The talks that opened today represent the culmination of that process and he said they would aim to find consensus on a political settlement to the country’s crisis, including establishment of a national unity Government representing all Libyans. “We are talking of course about Libyans willing to engage and to agree on the main principles,” he said, citing respect for democratic principles, State institutions and the ideas and values of the 17 February revolution, along with the rejection of terrorism. “For all Libyans agreeing on these principles, we are proposing an agreement and we are proposing a new unity government to start solving their political differences.” Underlining the need to re-start dialogue and achieve the second goal of the talks, which is to stop the fighting, he described the increasing political and security turmoil in the country, including the formation of competing institutions and Governments, the opening up of new battle fronts and a surge in terrorist activity. “Libya is falling really very deeply in chaos,” he warned. “If all these elements – the political, the security – were not enough, now we have also the very serious economic and financial chaos.” He pointed to a statement made by the Governor of the Central Bank of Libya which warned that the country is running out of time and stressed the urgent need to address all the country’s problems to avoid complete chaos. “Whatever is affecting Libya is affecting the whole region,” Léon said. “It’s affecting the Mediterranean, the Middle East, it’s affecting the Sahel; Europe. So it’s really a very serious issue.” He stressed that decisions on Libya’s future would not be taken in Geneva. Rather, proposals would be made there and debated before being put to the people of Libya. The broad representation of those involved in the Geneva talks is such because the aim is to reach a settlement with broad agreement, Leon said, promising full transparency.