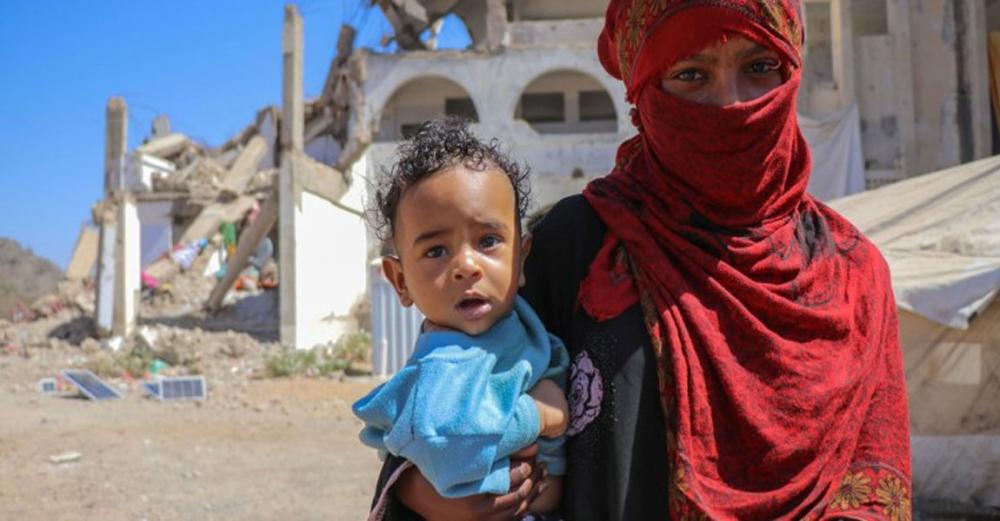 A mother holds her child in the Al Dhale'e Internally Displaced Persons (IDPs) Camp in Yemen. : YPN for UNOCHA

New York: The war in Yemen continues to ravage the country and its people, senior UN-appointed rights investigators said on Wednesday, in a call for an international probe into suspected war crimes, and sanctions against the perpetrators.

“Yemen has been ravaged in ways that should shock the conscience of humanity,” said Melissa Parke, member of the Group of Eminent International and Regional Experts on Yemen (GEE).

“Yemen has now experienced some six years of unremitting armed conflict, with no end inside for the suffering of the millions of people caught in its grip.”

Ms. Parke added that for the third year running since the Human Rights Council set the experts to work, they had found “reasonable grounds to believe that the parties to the conflict have committed and continue to commit serious violations of international human rights and international humanitarian law. Some of which may amount to war crimes.”

No regard for suffering

In a statement accompanying their latest findings, the experts insisted that “all parties continue to show no regard for international law or the lives, dignity, and rights” of the civilians who are suffering.

Fighting intensified across Yemen in 2015 between a Saudi-led coalition backing the internationally-recognized Government, based in the south, and the Houthi armed movement, known as Ansar Allah, with still controls the capital Sana’a, together with their allies.

There were “no clean hands” in the violence which has likely killed well over 100,000 people, destroyed vital public infrastructure and created a humanitarian catastrophe affecting many millions, the experts maintained.

They added that the responsibility for this rested “with all parties to the conflict…Namely the Government of Yemen, de facto authorities, the Southern Transitional Council and members of the Coalition, in particular Saudi Arabia and the United Arab Emirates.”

“For too many people in Yemen there is simply no safe place to escape the ravages of war,” Ms. Parke told journalists via videoconference in Geneva.

“There is for instance no safe place for those near the front lines who face the risk of indiscriminate attacks, for children playing in fields in which landmines have been planted, for schoolchildren at risk of being recruited into armed forces or groups, or for human rights advocates or journalists who are targeted because of their work.”

Verified human rights violations covered in the report include arbitrary deprivation of life, enforced disappearances, arbitrary detention, gender-based violence, including sexual violence, torture and other forms of cruel, inhuman or degrading treatment, the recruitment and use in hostilities of children, as well as denial of a fair trial.

The GEE also concluded that four airstrikes “or series of airstrikes” conducted by the Coalition during the reporting period from June 2019 to June this year “appear to have been undertaken without proper regard to principles of distinction, proportionality and precaution to protect civilians and civilian objects”.

Indiscriminate attacks had also been carried out by the Coalition and the Houthis, inflicting harm on civilians and civilian objects, they noted.

The report explained that disproportionate and indiscriminate attacks constitute war crimes under customary international law, and that the experts had also investigated the effects of landmines that were unlawfully planted by the Houthis.

In a first, the experts also called for a more in-depth, criminal probe into the perpetrators of the worst abuses in the Yemen conflict, supported by the UN Security Council and Member States.

This mechanism could be similar the one created by the UN General Assembly in 2016 to investigate abuses in the Syrian conflict, known as the International, Impartial and Independent Mechanism (IIIM).

“We urge the international community to seriously consider other mechanisms that go beyond merely reporting what we do: human rights violations,” he said. “We need to take criminal accountability and individual criminal responsibility seriously and therefore we do hope that our recommendations in this regard are taken up by the Human Rights Council and the Security Council and third states in particular.”

Given the scale of abuses reported by the Group of Experts, it was no longer possible for the international community to say that it was unaware of the dire situation in the war-wrecked country, they said.

“Yemen remains a tortured land, with its people ravaged in ways that should shock the conscience of humanity,” said Kamel Jendoubi, GEE chairperson.

Despite this, weapons continue to flow into the conflict, the experts continued.

“We are particularly concerned with the fact that third States continue to supply arms to the parties to the conflict in Yemen,” Mr. Imseis said. “There are a few leading players in that: the United States, France, the United Kingdom and this year we added Canada because there has been an uptick in arms sales by the Canadians in 2019.”

Since the beginning of the conflict, some 112,000 people have died as a direct result of hostilities, including around 12,000 civilians, the experts said.

They cited the Office of the United Nations High Commissioner for Human Rights (OHCHR) which has documented at least 7,825 civilians killed (including at least 2,138 children and 933 women) and 12,416 civilians injured (including 2,898 children and 1,395 women) as a direct result of the armed conflict between March 2015 and June 2020.

These figures do not include many thousands more who have died as a result of the worsening socio-economic, health and humanitarian conditions, the experts said.