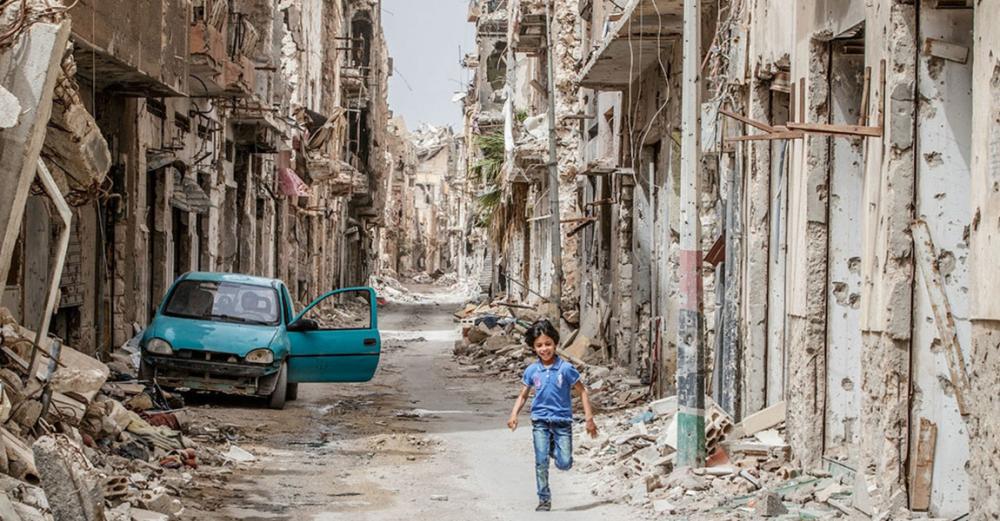 A child runs through the debris and wreckage in downtown Benghazi, Libya.: UNICEF/Giovanni Diffidenti

New York: The top UN official in Libya urged the Security Council on Wednesday to press for an immediate de-escalation of tensions and a return to negotiations, following the call from rival political leaders for a ceasefire on 21 August.

Stephanie Williams said that the simultaneous yet separate appeals – made by Fayez al-Sarraj, who heads the Presidency Council and is Prime Minister of the Government of National Accord (GNA) and Aguila Saleh Issa, President of the House of Representatives in eastern Libya -  featured “many points of convergence” that create a chance to move forward on intra-Libyan dialogue.

Their statements met with overwhelming expressions of support from Libyans of all political affiliations, as well as international partners, said Williams, acting head of the United Nations Support Mission in Libya (UNSMIL).

“It is becoming a regrettable cliché to appear before you and warn that Libya is at a critical juncture, but yet I am compelled to pronounce these same words again,” she told Council members via video-teleconference.

“Libya is indeed at a decisive turning point. Your support – not only in words, but most importantly in action – will help determine whether the country descends into new depths of fragmentation and chaos or progresses towards a more prosperous future.”

Updating the situation since Secretary-General António Guterres briefed the Council on Libya in early July, Ms. Williams said that an uneasy standoff continues around the city of Sirte, imperilling the lives of its 130,000 inhabitants as well as the country’s vital oil infrastructure.

While the frontlines have remained relatively quiet since June, foreign sponsors are continuing to deliver advanced weaponry and equipment – in violation of a UN arms embargo - to the so-called Libyan National Army (LNA), or Libyan Arab Armed Forces, led by General Khalifa Haftar, and forces controlled by the internationally recognized GNA.

“The Mission continues to receive reports of large-scale presence of foreign mercenaries and operatives, further complicating local dynamics and chances of a future settlement”, she said, adding that reports of imminent offensives – often through social media – “exacerbate the rate of miscalculation”.

Reckless actions – like the firing of Grad rockets by General Haftar’s forces into GNA-occupied areas on 26 August and 1 September, despite an agreed ceasefire in June – caused no damage or casualties, but they risk igniting a bigger confrontation.

Now is the time for restraint

“It is imperative that you use your influence to impress on all sides that now is the time for restraint,” she urged Council members.

Adding to the sense of instability are worsening socio-economic conditions that are fuelling popular unrest – notably in the capital Tripoli - and threating the fragile calm required to move political and security talks forward, she added.

“The surge in the use of hate speech and incitement to violence – occasionally stirred through foreign-based media outlets and electronic armies – appears designed to further divide Libyans”.

The COVID-19 pandemic meanwhile appears to be spiralling out of control in Libya, with the number of confirmed cases more than doubling in the past two weeks, with 15,156 cases and 250 recorded deaths as of Tuesday.

“Nearing full collapse after more than nine years of conflict, the health care system is unable to respond to the additional weight placed by COVID-19 patients along with maintaining normal health services,” she said.

While the UN and its partners are providing medical supplies and increase public awareness of the coronavirus, the Libyan authorities must “cooperate transparently” in a joint fight to control the outbreak, she added.

Underscoring humanitarian challenges, she emphasized that migrants, refugees and asylum-seekers – “at great risk to their lives” – are still trying to cross the Mediterranean Sea to Europe, including 45 people who perished on 18 August when their boat sank off Libya’s east coast.

With more than 7,000 migrants and refugees attempting the crossing this year, and more than 300 dying whilst doing so, she said European countries should consider “a more humane and predictable disembarkation mechanism” in line with their international human rights and search and rescue obligations.

“Libya cannot be considered as a safe port for disembarkation,” she said, noting that almost 2,400 migrants and refugees are in official detention centres in Libya where their human rights are routinely violated.

Many more are in unofficial sites that the UN cannot access, she added.