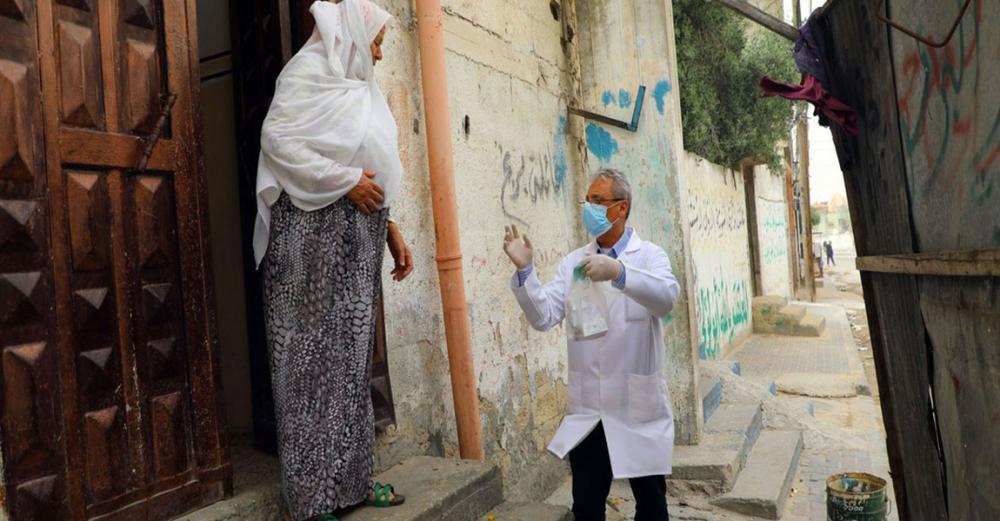 Health staff from the Shaboura Health Centre in Rafah, Gaza, run by UN relief agency UNRWA, deliver medications directly to elderly Palestine refugees in the wake of COVID-19, so reduce their chances of exposure. : UNRWA/Khalil Adwan

New York: The top UN official in the Middle East has hailed an agreement to reduce the latest tensions in and around Gaza amidst the COVID-19 pandemic.

The UN Special Coordinator for the Middle East Peace Process, Nikolay Mladenov, welcomed the truce between Hamas and Israel, announced on Monday, which aims to end weeks of cross-border bombardment.

"Ending the launching of incendiary devices and projectiles, restoring electricity will allow #UN to focus on dealing with the #COVID19 crisis. All parties should return to the calm understandings”, he wrote in a tweet posted on Tuesday.

While also welcoming the agreement, an independent UN human rights expert has expressed deep concern over the recent rise in armed violence in Gaza, home to two million Palestinians.

“Gaza has been reduced to a humanitarian whisper”, said Michael Lynk, UN Special Rapporteur for the situation of human rights in the occupied Palestinian territory.

“Behind the current hostilities – the launching of rockets and incendiary balloons by Palestinian armed groups and the disproportionate use of targeted missile strikes by Israel – is the long-term impoverishment of Gaza by Israel’s 13-year-old comprehensive blockade.”

Mr. Lynk outlined some of the issues resulting from the prolonged situation, such as a collapsing healthcare system, high unemployment, and inadequate and unreliable power supplies.

“Gaza is on the verge of becoming unliveable”, he said. “There is no comparable situation in the world where a substantial population has endured such a permanent lockdown, largely unable to travel or trade, and controlled by an occupying power in breach of its solemn international human rights and humanitarian obligations.  Our international standards of dignity and morality do not allow such experiments in human despair.”

Not ready to face pandemic

Meanwhile, community transmission of COVID-19 is an emerging concern.

“Perversely, Gaza’s misfortune to be a blockaded territory has meant that, until now, the global pandemic has not entered the territory in any numbers,” he said.

The rights expert warned, however, that the consequences are likely to be “very serious”, should the disease take root.

“While the international community has been providing the medical supplies to deal with the pandemic, Gaza lacks the health care infrastructure – particularly regarding hospital capacity and the quantity of health professionals, testing kits and respiratory equipment – to manage a widespread outbreak,” he said.

For Mr. Lynk, the deal between Israel and Hamas “has to be the first step towards the full realization of human rights in Gaza, and not another temporary step waiting for the next round of hostilities.”

What is required is an end to the blockade, he said, and “not temporary band-aids”, as well as the tools that will lead to economic development and Palestinian self-determination.

He cautioned that true peace, and badly needed reconstruction of Gaza, will only come with full respect of the fundamental rights of the people who live there.

They are appointed by the UN Human Rights Council and are not UN staff, nor are they paid by the Organization.