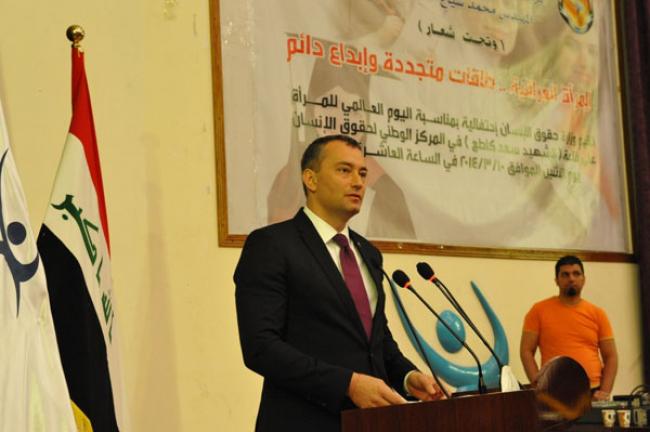 New York, Nov 21 (JEN) As Iraq struggles to deal with the increasing security threat of the Islamic State of Iraq and the Levant (ISIL) as well as with dire financial and humanitarian conditions, the United Nations envoy to the country has cited an inclusive political process as vital to finding comprehensive solutions.

In an interview with UN Radio, Nickolay Mladenov, head of the UN Assistance Mission in Iraq (UNAMI), said that there is “general agreement,” not just in the UN but in Iraq as well, that the security element of dealing with ISIL is one part of the solution, but is not the comprehensive solution to the problems facing the country. “What also needs to happen is a political process, and a political process that allows for the various communities of Iraq to come back together,”  Mladenov stressed. “The last decade has seen a lot of violence that has been driven by divisive politics, that [in turn] has been driven by the communities looking more inwardly rather than working together, and it is time now to address that,” he added. Indeed, he said, the new Government in Iraq is inclusive of all the political parties, and is embarking on an agenda of addressing some of the long-standing grievances that exist within Iraqi society, including those related to poverty, security, participation in decision-making and revenue-sharing. As such, the UN is working “intensely” with the Government of Iraq, as well as with Kurdish authorities and with various groups on the ground to find where agreement can be reached on security, political and social solutions, and, ultimately, pushing for those agreements to be implemented,  Mladenov said. “Our role really in this process – what I think is fundamentally the role of the United Nations around the world – is to bring people together, to facilitate dialogue, and to come up with proposals for solutions that could work on the ground, and to help implement them,” he said. Asked how he would evaluate the current political process in Iraq,  Mladenov said there is “definite change,” but stressed that such change takes time. “We have to acknowledge that in an environment in which the country is struggling with a life-threatening threat, which is ISIL, with a very difficult financial situation because of the falling oil prices and lack of an approved budget by Parliament, all of these changes will take time,” he said in the interview. An encouraging sign, which occurred in the past few days, has been the agreement reached with the Kurdish authorities in the North of the country to allow the resumption of payments from the federal budget, allowing people to receive their salaries, the envoy said. In addition, the resumption of the Kurdistan Regional Government providing oil to the federal Government for export is another positive occurrence, as this helps the Iraqi budget as well, he noted. In response to a question about the humanitarian situation in the country,  Mladenov emphasized the urgent challenge of providing shelter, food and fuel to up to 2 million people who have been displaced in Iraq. In that regard, he noted the Iraqi Government’s decision to increase assistance to the internally displaced people by coming forward with quotas for heating oil. Lamenting the lack of financial support as the winter approaches,  Mladenov said the $500 million donation from the Government of Saudi Arabia is running out. Mobilizing international support for dealing with the internally displaced is a continuing priority, he said, as is continuing the difficult task of attempting to reach people in ISIL-controlled areas. Asked about the major challenges in Iraq going forward, he said that among them is restoring security to Baghdad and restoring control in the areas that have been taken over by ISIL; dealing with the financial crisis in the country; and advancing the political process and the policies of inclusivity that the Government of Iraq is now putting forward. “That is the long-term guarantee – that’s the insurance policy for any security deterioration in Iraq in the future,” he concluded.