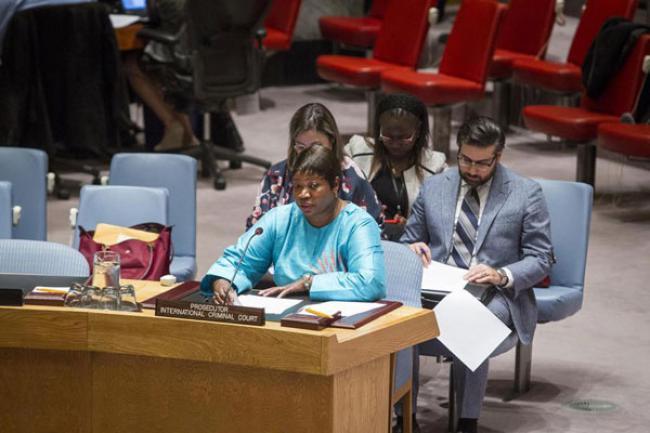 New York, Nov 12 (JEN): A deteriorating security situation and growing political instability in Libya are creating an environment that â€œclearly cannot be conduciveâ€ to closing the impunity gap, the Prosecutor of the International Criminal Court (ICC) warned the United Nations Security Council today.

“I cannot stress enough the deleterious impact that the unstable political and security situation in Libya has had and continues to have on my investigations,” Fatou Bensouda said as she briefed the 15-member Council earlier today. “While my Office remains steadfast in its commitment to continue to pursue its mandate in Libya, the security situation has significantly hampered our ability to effectively investigate in the country,” she added. Despite last June’s elections, she said, Libya is currently split with two governments vying for legitimacy. This week the country’s Supreme Court announced a ruling that declared the national Parliament unconstitutional.  Bensouda said that a more worrisome aspect of the deteriorating situation is the ongoing spate of assassinations in Benghazi, threats to media workers, human rights defenders and women in particular, as well as to prosecutors, judges and lawyers. Also, an alarming number of people in detention reportedly lack access to due process and may be subject to torture and death in custody. As for the ICC’s work in the country, she said contact with the Libyan Government has been largely confined to liaison with the Focal Point, who has faced difficulty in making effective contacts, and much needed assistance from national authorities to undergo investigative efforts. Progress was made recently when the Focal Point of the Government arranged a meeting outside of the country between members of the ICC team and Libyan authorities. While those talks laid the groundwork for further coordination, the combined effect of instability and lack of resources is “severely” undermining her Office’s work. “We have been obliged to scale down resources for investigations in the country, in effect, limiting our ability to investigate, amongst others, new instances of mass crimes allegedly committed by the rebel forces,” she said.  Bensouda called on the international community to be more proactive in exploring solutions to help restore stability and strengthen accountability for Rome Statute crimes in Libya. “The continuing disparity between resources and expectations, risks systematic underperformance that will not only harm the Court and its mandate, but also the credibility of this Council,” she said. To be more responsive in providing critical assistance, an international contact group on justice issues through which material, legal and other support could be provided to Libya, ought to be explored. This forum could also help focus attention on specific problems facing Libyan authorities and assist supportive States to coordinate efforts with those of the ICC and Libya. She also called on the Libyan Government to “immediately” surrender Saif Al-Islam Gaddafi (son of late Libyan leader Muammar Gaddafi) to the custody of the ICC. The Office was also closely monitoring developments in the case of Abdullah Al-Senussi, former intelligence chief of the Gaddafi regime. The mass displacement of the Tawergha tribe during the 2011 revolution remains a serious concern for the ICC,  Bensouda said, emphasizing the need for the Libyan authorities to facilitate a visit by representatives from the local councils of Misrata and Tawergha to New York to meet with Security Council members. “There is certainly room for all of us to do more. To be sure, we must not fail Libya, but Libya must also not fail itself,” concluded  Bensouda. In 2011, the Security Council adopted Resolution 1970 to oversee relevant sanctions measures including an arms embargo, a travel ban, an assets freeze and measures in relation to attempts to illicitly export crude oil. Late last August, the Council adopted resolution 2174 (2014) which reinforced the arms embargo and expanded the criteria for designation of individuals or entities as subject to the travel ban and assets freeze.