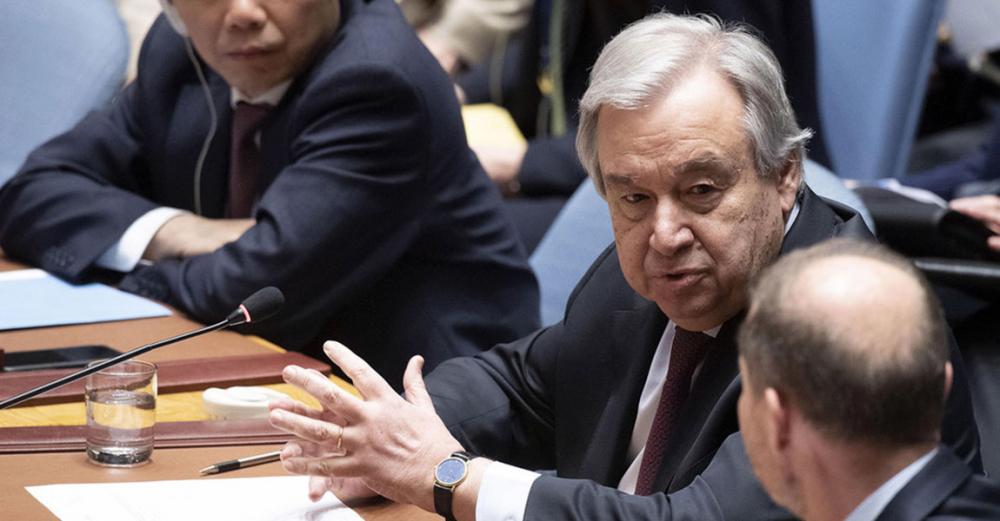 New York: With the Security Council meeting in emergency session on Syria following the death on the battlefield of dozens of Turkish troops, the UN strongly urged Russia and Turkey on Friday “to build on previous agreements to secure a fresh ceasefire” across the war-torn northwest.

The UN Secretary-General António Guterres built on his impassioned call earlier in the day for Syrian Government forces backed by Russia, who are attempting to drive the last opposition forces out of Idlib, backed by Turkish forces, to all “step back from the edge of further escalation.”

On Thursday, following strikes on Turkish troops inside Syria, the Turkish Ministry of Defence said that 33 of its soldiers were killed, and 32 wounded, by strikes it attributed to the Syrian Government.

Warning of the potential “dramatic impacts” of further direct confrontation, Mr. Guterres told the Council - which met only yesterday on Syria to consider Idlib's unfolding humanitarian disaster - that the risk of fighting spiralling out of control, “taking into account the volume of the forces that are in Idlib, and around Idlib, is something that cannot be taken lightly.”

Strikes launched ‘seemingly without regard for civilians’

Following on from the UN chief’s appeal, the UN’s head of Political and Peacebuilding Affairs, recapped the events of the past nine days, driven by the Russian-backed Syrian advance across Idlib, together with a counter-attack in the east by non-state armed groups, which saw the city of Saraqib reportedly retaken.

Following the reported deaths of the Turkish troops, she said Russian defence ministry officials had “confirmed that an unspecified number of Turkish soldiers, who they said were co-located” with opposition fighters, “had been hit by Syrian Government shelling.”

Turkey noted that it had targeted Syrian Government positions in response, “with aircraft, weaponized drones and artillery”, Ms. DiCarlo added.

“We strongly urge Russia and Turkey to build upon their previous agreements to secure a ceasefire for northwest Syria”, she said, noting the devastating impact on civilians of the escalation.

Attacks had come from air and ground “seemingly without regard for civilians”, displacing nearly a million, including more than 560,000 children: “They are fleeing north…into ever-shrinking areas where they still hope to find relative safety.”

Indiscriminate killing ‘happening under our watch’

With the UN human rights office OHCHR verifying at least 1,750 civilian deaths since April, the actual number “is probably higher”, said Ms. DiCarlo, with 94 per cent occurring in opposition-held areas.

However, the Security Council-designated terrorist group Hayat Tahrir al-Sham has also been responsible for indiscriminate attacks she said: “Civilians are killed in IDP camps, schools and hospitals. This is happening in plain sight, night and day, day in and day out. Hospitals destroyed. Schools destroyed. People's lives destroyed.”

“And it is all happening under our watch”, she declared to the chamber.

With an “ever-growing record of destruction and atrocity” in Syria, she noted the countless warnings from the UN that attacks on civilians are simply unacceptable.

“We have reaffirmed to the parties that all military operations must respect the rules of international humanitarian law. If such horrific acts and tactics persist despite global outrage, is it largely because their authors do not fear accountability and justice?”

She concluded by noting that the civilians living in daily terror from the guns, shells and mortar rounds across Syria, were “not asking for a pause in the fighting. They are asking for an end to the killing. We must all assume our responsibility to do all we can to stop this violence."