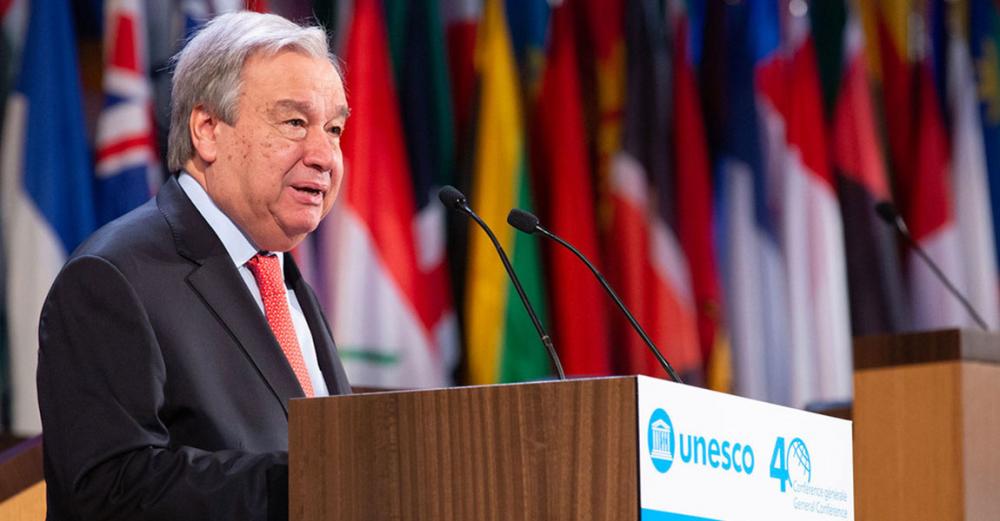 New York: Education is an “essential pillar” to achieving the UN’s 2030 Agenda for Sustainable Development, UN chief António Guterres told an audience on Tuesday at the Paris headquarters of UNESCO, the UN Educational, Scientific and Culture Organization, ahead of the agency’s General Conference.

Guterres, who noted that one-fifth of young people are out of work, lack education or adequate training, praised UNESCO’s fundamental role in coordinating and monitoring global efforts, such as the agency’s initiative on the future of education.

The theme was taken up by Tijjani Muhammad-Bande, President of the UN General Assembly, in his opening remarks to a ministerial meeting on education at the Conference.

Muhammad-Bande referred to estimates showing that some 265 million children are out of school. The number is projected to fall to 220 million over the next decade, but he declared that the illiteracy figures forecast for 2030 remain a scandal: “We must remove all barriers to education. We must ensure, at a minimum, universal access to basic education for every child, everywhere.”

He also highlighted the importance of educating children effectively, and equipping them with the necessary analytical and critical thinking abilities, in “an ever-changing and more complex world”.

Recalling his former experience as an educator in his home country of Nigeria, Muhammad-Bande called for more efforts to ensure that teachers are adequately qualified, because “no educational system can rise above the quality of its teachers”.

Other important measures cited by the General Assembly President include strong curricula that fully integrate Information and Communications Technology (ICT); ensuring that girls complete at least 12 years of education (which, according to the World Bank, would add some $30 trillion to the global economy); and the effective monitoring and evaluation of learning.

Muhammad-Bande called on nations to meet their commitments to education spending, and for donor countries to increase international aid directed towards education.

As well as the difficulties in accessing quality education, Guterres also outlined several other challenges faced by young people: the fact that millions of girls become mothers while they are still children; that one quarter are affected by violence or conflict; and that online bullying and harassment are adding to high levels of stress, which see some 67,000 adolescents die from suicide or self-harm every year.

World leaders, and others who wield power, he continued, must treat young people not as subjects to be protected, but as powerful agents for change, and the role of the powerful is not to solve the enormous challenges faced by young people, but rather to give them the tools to tackle their problems.

Guterres underscored the importance of bringing young people to the table as key partners, and praised UNESCO’s efforts to include their voices, which include holding a major event at the General Conference, and the Youth Forum.