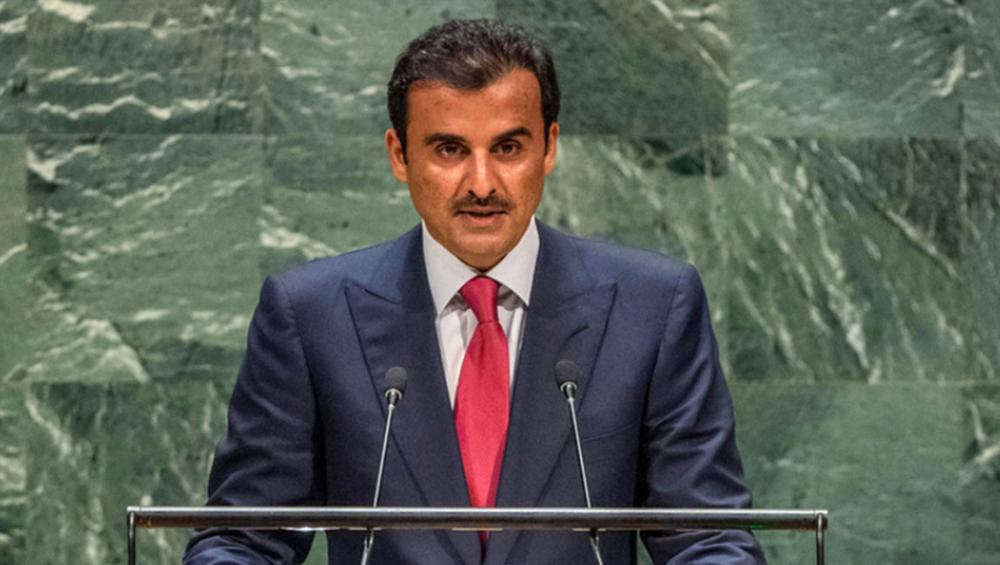 “We assert our firm position to keep the region clear of risks by resolving differences through dialogue based on common interests and respect for the sovereignty of its States” he said. “Stirring up tension and dictating will by blockading and using sanctions are not in the interest of any of them.”

He recalled his previous assertions that a regional security system be established to preserve “the security and stability of the Middle East in general and the Gulf region in particular”, adding that yet, “the unjust, unlawful and unjustified blockade imposed by some countries on the State of Qatar continues” – referring to Qatari airplanes and ships prevented from using airspace and sea routes along with Saudi Arabia blocking its only land crossing.

“We, who have sustained aggression, emphasize our position that unconditional dialogue based on mutual respect and lifting the unjust blockade is the only means to end this crisis”, he continued, thanking Kuwait and other countries for trying to resolve the crisis.

Speaking about the Israeli-Palestinian situation, he cited “the expansion of settlements, Judaization of the city of Jerusalem, the unjust and strangling blockade of the Gaza strip, [and] intensifying settlement activity in the occupied Syrian Golan Heights” as acts of “overt defiance” to the UN and its resolutions.

He stated that permanent peace, based on justice, guarantees the rights of the Palestinian people.

On Syria, the Emir said their eight years of suffering “has become a major scandal and disgrace on humanity”, pointing to “the inability of the Security Council to protect civilians and make the necessary decision to stem the bloodshed”.

“The State of Qatar will continue to carry out its humanitarian obligation in providing political support and humanitarian aid to the brotherly Syrian people to alleviate their suffering”, he said.

He also expressed concern over the “unity of Yemen, its territorial integrity, and its sovereignty”, saying that until Yemenis “apply solutions they have reached without foreign intervention”, Qatar backs UN efforts to end the war and supports the Organization’s humanitarian and relief efforts.

And on Libya, Mr. al-Thani Amir lamented the latest developments, which he said threatens the country’s unity and stability.

“There is an international effort and an internationally recognized settlement” that is not being implemented, he flagged, calling on all actors in Libya “to shoulder their responsibility and respect the will of the Libyan people towards a peaceful solution”.

The Emir maintained that defeating terrorism “requires a comprehensive approach that includes tackling its political, economic and social roots, along with the security and military action”.

Noting that “many countries have begun to realize the mistake of linking terrorism to a particular religion”, he emphasized the political and moral need “to go beyond confining terrorism to individuals and groups”, and to recognize “State crimes against unarmed civilians as State terrorism”.

The UN’s success in countering challenges depends on the willingness of Member States to implement their commitments, according to the Emir of Qatar, who closed his speech renewing his country’s “commitment to multilateral international action, partnership and cooperation for the interest of our peoples and the good of humanity”.