Development
Governance/Geopolitics
Football is ‘refuge for those who have left everything’; UN initiative aims to bolster well-being of refugee, migrant children in Peru 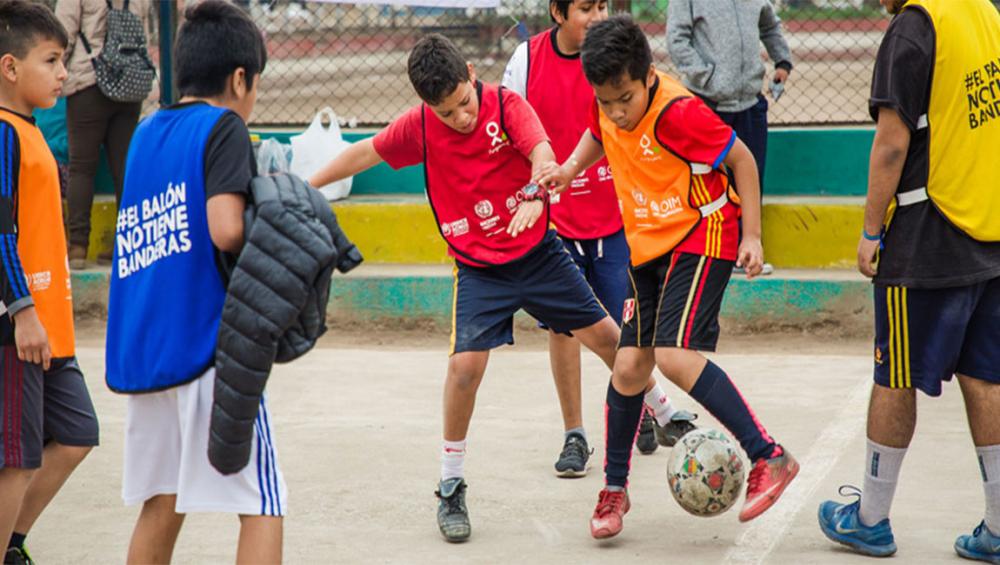 New York, Aug 28 (JEN): Sport brings people together “regardless of conditions or flags”, a senior United Nations official in Perú said on Tuesday referring to a new initiative launched over this past weekend to promote the well-being of children and youth in Lima’s refugee and migrant communities through football.

The UN International Organization for Migration (IOM) and the Office of the UN High Commissioner for Refugees (UNHCR)’s ‘The Ball Has No Flags’ aims to harness Latin America’s most popular sport to strengthen values, such as resilience, integration and community cohesion through.

“The proper integration of girls, boys and adolescents always contributes to the future of a country”, IOM Perú Programme Coordinator, Rogelio Quintero explained. “For this reason, ‘The Ball Has No Flags’ will support the integration and development of strengths and abilities”.

The first stage of the project is being developed in the districts of San Juan de Lurigancho and San Juan de Miraflores, both located in the country’s capital.

Participating in the activities on Saturday were Itzel Delgado, medal winner in paddle surf at the 2019 Pan American Games in Lima, and medaling in judo, Yuliana Bolívar, who was born in Venezuela but became a Peruvian citizen.

Through sport, Quintero added, about 200 mostly Peruvian or Venezuelan children and adolescents between six and 18 years old learn leadership and cooperation through the prism of equality and inclusion.

“Football is the same anywhere in the world”, said Federico Agusti, UNHCR Representative in Perú. “It has the same rules, the same language and the same joys”.

The UNHCR official called it “a refuge for those who have had to leave everything and a meeting point to celebrate something we all understand, a goal”.

He pointed out that there are more than 30 Peruvians playing abroad, including Paolo Guerrero, and “when he scores for Perú or Brazil, there are no differences, we celebrate the same”.

“This project allows Peruvians and Venezuelans to start from a common point to learn to take advantage of their differences”, asserted Agusti.

The activity is supported by the Fútbol Más Foundation, an organization that promotes community cohesion through play and sport as well as the well-being of children and youth.

“The ball invites us to share, meet and celebrate”, according to Jimena Chavez, Social Director of Fundación Fútbol Más Perú. “We celebrate this initiative, where Peruvian and Venezuelan families will gather to start the sports partner program and demonstrate together that the ball has no flags.”

Regardless of their nationality, the initiative invites all to feel part of the cultural life in their community.

‘The Ball Has No Flags’ is part of the integration and solidarity campaign between Peruvians and Venezuelans known as Tu Causa Es Mi Causa (or your cause is my cause). That campaign has been implemented by the UN System in Perú, with the leadership of IOM and UNHCR.


Peruvian and Venezuelan children have fun during the launch of “The Ball Has No Flags”. (August 2019)