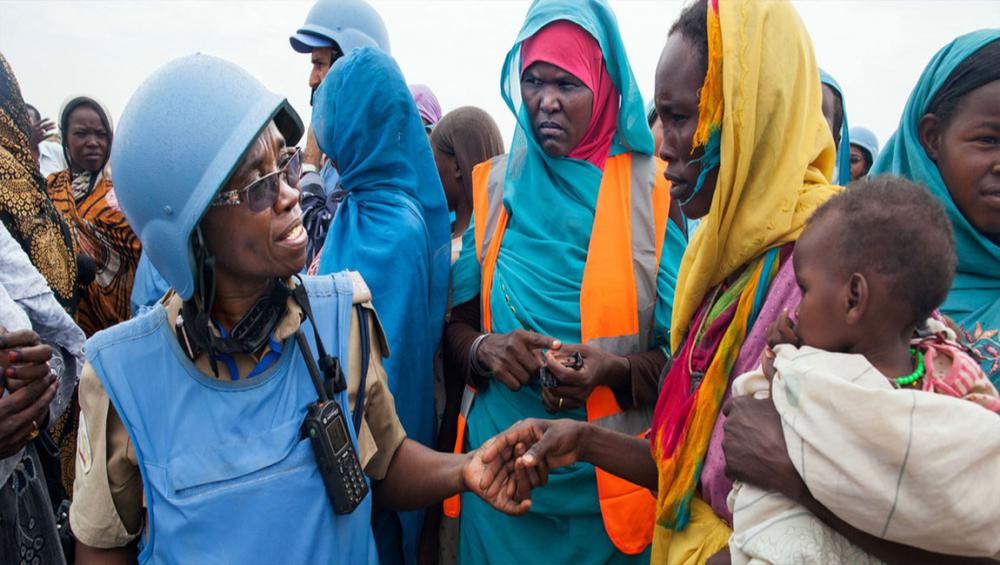 New York, June 15 (JEN): The joint African Union-UN Mission in Darfur (UNAMID), is suspending the handover of any more camps for displaced civilians to the Sudanese military, against a backdrop of worsening violence and insecurity across the country.

Briefing the Security Council on Friday, UN Peacekeeping chief, Jean Pierre Lacroix, said that the bloody 3 June military crackdown in the capital Khartoum, had highlighted the central role of the Darfur-linked Rapid Support Forces (RSF), which are reportedly made up largely of former Janjaweed militia, which has been accused of serious human rights abuses.

During the Darfur conflict between the Government and their militiamen allies, and rebel groups, which began in 2003, the UN estimated that around 300,000 were killed, and around 2.7 million forced from their homes. Former president Omar al-Bashir  was indicted for war crimes including genocide, nine years ago.

Lacroix said that the ruling Transitional Military Council, which led the violent break-up of pro-democracy protests in the capital earlier this month, had decreed on 13 May, that UNAMID “hand over all ‘camps’ to the Rapid Support Forces, which is in contravention to the UN rules and proceedures.”

“Give these developments, we have had no choice but to suspend the handover of UNAMID sites to the Sudanese authorities until the TMC decree is rescinded”, he told members.

Lacroix said the mission’s leadership was doing its utmost to maintain normal contacts with the authorities, but in Darfur itself, the “political process is in a stalemate”. A prolonged humanitarian crisis means 1.5 million continue to live in camps, and the combined challenges means that a “comprehensive approach beyond peacekeeping” is needed, he added, noting that conventional peacekeeping “is no longer the most appropriate tool”, requiring UNAMID “to appropriately adjust its posture.”

He said the latest UN and AU report on the mission and its mandate, pointed to the continued drawdown of UNAMID in 2020, “reflecting the current realities”, subject to a review this November.

“We call upon the Security Council members to carefully consider the options for the drawdown and liquidation of UNAMID”, he concluded.


The UN Assistant Secretary-General for Human Rights, Andrew Gilmour, told members that though violence between militias had decreased, the human rights situation overall had got worse, “with increased reports of killings, abduction, sexual violence and other violations.”

The “ripple effect” from the killings and abuse in Khartoum was real, he said, noting that 47 had been killed, with 186 injured in various parts of Darfur in the past three months of national upheaval.

In the last two months, 163 civilians had been arrested and detained in relation to protests in Darfur, and the Human Rights Section of UNAMID “has received accounts of intensified harassment of civilians and looting of houses and livestock by Rapid Support Forces”, noted Mr. Gilmour.

“We believe that many cases in Darfur remain invisible and under-reported due to lack of access to some parts of the region”, he said, adding that in “an atmosphere of violence and uncertainty, upholding the priorities of the protection of civilians and of human rights in the mandate of UNAMID, is of paramount significance”.

A strengthened civilian presence in the mission “will have a positive impact on protection of civilians” he asserted, and it was vital to keep “positive collaboration” with national rights institutions intact.

UN humanitarian aid coordinating agency OCHA, cautioned on Friday at a briefing for journalists in Geneva, that needs remain at crisis levels in Darfur.

“There is still a humanitarian crisis in the Darfur region which is impacted by what is happening,” said spokesperson Jens Laerke.

Violent communal attacks, destructive flooding, along with a civil disobedience campaign and the disruption of internet services and phone networks have all hampered operations in the vast western region, the OCHA spokesperson maintained.

On Tuesday, he said that a team from UNAMID visited Deleij in central Darfur, following reports of “tribal fighting”.

UNAMID “verified that 17 people had been killed, 15 (were) injured, and more than 100 houses (had been) burned,” Mr. Laerke explained, following reports that the fighting involved clashes between nomads and residents angered by price increases at the local market.

In northern Darfur, meanwhile, humanitarian partners have provided support to people affected by flooding in Tawilla, which has totally or partially destroyed some 1,300 households and affected hundreds of latrines, constituting an immediate health hazard.

According to the World Food Programme (WFP), more than 70 per cent of planned prepositioned food has already been delivered to different states across Sudan.

This will enable the UN agency to deliver lifesaving humanitarian aid to some 740,000 people in inaccessible locations during the rainy season, which usually ends around September.
As WFP and other UN agencies and partners respond to ongoing needs, OCHA’s Jens Laerke said funding for Sudan was well below where it needed to be at this mid-year point.

“Overall, the whole of Sudan and the humanitarian operation there is struggling with lack of funding,” he said. “We are asking for a total of $1.2 billion to the response across the country. Now halfway through the year, we are just a little more than 22 per cent funded.”