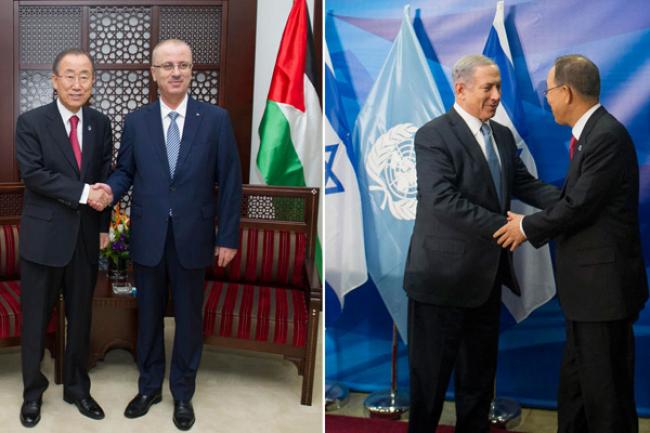 New York, Oct 14 (JEN) The rebuilding of Gaza remains an important undertaking, but tackling the root causes of instability in the territory is equally critical, United Nations Secretary-General Ban Ki-moon affirmed on Monday as he began a visit to the long-troubled region, urging both Israeli and Palestinian stakeholders to come to an agreement and â€œavoid yet another tragic conflict in the future.â€

During a visit to the cities of Ramallah and Jerusalem, where he met in the morning with Palestinian Prime Minister Rami Hamdallah and, in the afternoon, with Israeli Prime Minister Benjamin Netanyahu, the Secretary-General called on all parties to stop the “endless, needless, mindless cycle of suffering” that has continued to inflame tensions throughout the region and spawned decades of instability. “Ultimately, the situation can only be resolved as part of a broader political horizon that ends the nearly half century of occupation and leads towards a two-state solution where the State of Palestine co-exists with Israel in peace and security,”  Ban said during his press conference in Ramallah with Prime Minister Hamdallah. “Time is not on the side of peace,” he continued, warning that the world needs to act immediately to prevent the deepening of “an already unsustainable status quo.” “The United Nations, all systems, will continue to fully support all efforts to achieve a negotiated two-state solution,” added  Ban. The two-pronged trip to the Israeli and Palestinian seats of political power comes on the heels of a weekend conference held in Cairo in support of the UN-backed plan on reconstruction of Gaza following a 51-day conflict in which entire neighbourhoods were flattened and almost one-third of Gaza’s population was uprooted. The violence also killed more than 2,100 Palestinians and more than 70 Israelis. On Tuesday, the Secretary-General’s trip through the region will take him to Gaza, where he will visit several sites destroyed during last summer's conflict, including a compound belonging to the UN Relief and Works Agency (UNRWA), a UN Development Programme (UNDP) Fishing Project and the Jabalia school. In addition to visiting Gaza, he will also visit go to an Israeli kibbutz that had been hit by rockets from Gaza during the conflict. In Ramallah on Monday, the Secretary-General recalled his last visit to the region during that “tremendously difficult time” and said that in his current visit he brought with him “the hope of rebuilding Gaza and creating a brighter future for the people.” According to initial reports, in fact, donors attending the Cairo conference have pledged $5.4 billion for the reconstruction of Gaza – an amount exceeding the original $4 billion requested by Palestinian authorities. “The amount which has been committed, pledged by the international community, is quite encouraging considering current international situations, the crisis happening here and there,”  Ban stated. “I was very much encouraged by such a strong support.” Speaking in Jerusalem later in the afternoon during his meeting with Prime Minister Netanyahu, the Secretary-General underscored that a UN-brokered agreement allowing for “a temporary Gaza reconstruction mechanism” would not only kick-start the much-needed rebuilding of the devastated territory, but would also take “fully into account Israel’s legitimate security concerns.” The trilateral agreement, coordinated between the Office of the UN Special Coordinator for the Middle East Peace Process, Israel and the Palestinian Authority, was reached in September and enables work at the scale required in the Gaza Strip, involving the private sector and giving a lead role to the Palestinian Authority in the reconstruction effort while providing security assurances through UN monitoring that these materials will not be diverted from their entirely civilian purpose. The Secretary-General noted that rebuilding would help prevent a return to economic degradation for Gaza and the Palestinians which, he warned, would merely reset the clock for “more instability, underdevelopment and conflict.” “Economic revival, which requires the predictable exit and entry of goods and people, can change the dynamics on the ground and ultimately enhance stability in Gaza, which in turn will improve Israel’s security,” said  Ban. The Secretary-General also addressed the recent announcement of Israel’s plans to advance settlements in East Jerusalem, in contravention of international law, stating that he was “very concerned” about the developments and warning that they could have a deleterious effect on any progress towards a definitive peace. “This does not send the right signal and I urge the Government of Israel to reverse these activities,” he added. “Unilateral action is no foundation for the future. The two-state solution is the only way to bring peace to both sides.”  Ban reiterated this message during his visit with Israeli President Reuven Rivlin later in the day when he warned that the region could no longer afford distractions from tackling “the fundamental cause of strife, namely the absence of a comprehensive peace settlement.” “Israeli-Palestinian peace is necessary and urgent because it is the only route to securing long-denied Palestinian rights and to Israel’s lasting security,” he concluded.