Geopolitics
Governance/Geopolitics
Continue ‘their mission’ urges UN chief, as the victims of the Baghdad bombing are remembered, 15 years on 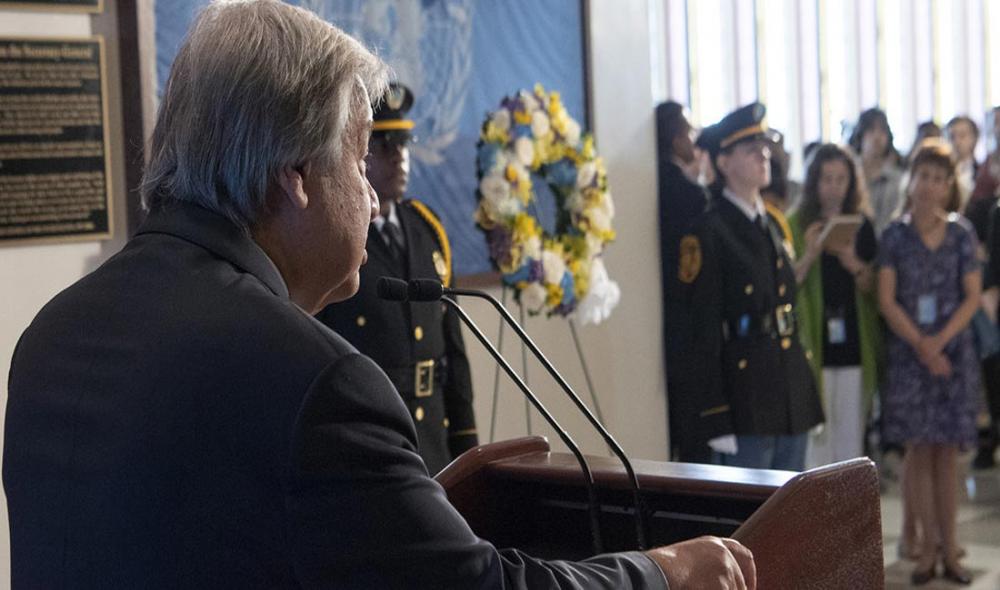 New York,  Remembering 22 colleagues killed by the “horrific terrorist attack” on the United Nations headquarters in Baghdad 15 years ago, Secretary-General António Guterres has called on all staff to pay tribute to the fallen by “continuing their mission,” and keep going to “dangerous places with the aim of making them safer”.

In a wreath-laying ceremony at the United Nations Headquarters on Friday in New York, the UN chief reminded those assembled of the Organization’s core commitment – embodied by those who died on 19 August, 2003 - to stand “with those who are suffering, to bring them the relief they need”.

After observing a minute’s silence, he said the fallen UN staff had “made the ultimate sacrifice for the values and the Charter of the United Nations, and for the people of Iraq”.

The ceremony took place in front of the memorial established to commemorate the attack, where the UN flag from the Canal Hotel and the names of the victims are displayed.

“I was personally close to some of those colleagues, including their leader, the incomparable Sergio Vieira de Mello,” he mentioned. “I had the opportunity to be in close contact with him during his time in East Timor where he played an absolutely essential role in guaranteeing the freedom of the people of East Timor and a smooth transition for their sovereignty”.

Addressing the audience, which included families and colleagues of the deceased, he said “this was a huge personal loss to so many of us. And an even greater blow to the families of those who were killed”.

The attack, which was the first time the UN was deliberately targeted on a massive scale, “was traumatising for the whole organisation, and we learned some very difficult lessons,” said Guterres, explaining that “the mechanisms in place to look after survivors and the families of victims were inadequate, and it has taken too many years to improve them”.

The UN chief regretted that “before and since that day, United Nations staff have been targeted by those who would like to weaken us and make us afraid to do our jobs.” Referring to attacks against the UN that have taken place in Algiers, Kabul, Mogadishu, Abuja and other locations, he said “terrorists have attempted to silence and to banish us”.

Though he stated that the work of the UN “will never be free from risk,” the Secretary-General stressed that he is “committed to improving security for all United Nations staff”.

“The blue flag of the United Nations flies high because of the brave women and men who carry it to the farthest corners of the world,” he said, adding that “the legacy of the humanitarian workers, the peacekeepers, the military and civilian staff who have given their lives is lasting and will be ever-present in our hearts”.