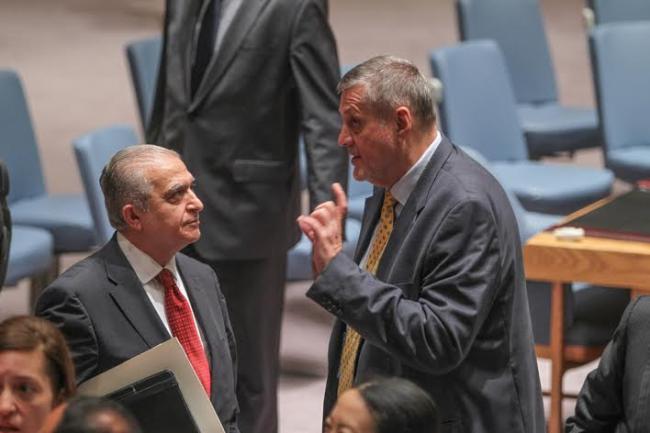 New York, Jul 23 (JEN): With Iraq facing â€œone of the most difficult phases in its modern history,â€ the Government, its leadership and, most of all, Iraqis themselves, will need â€œcontinuous and massiveâ€ support and assistance from the international community, the top United Nations official in the country told the Security Council on Wednesday.

Since last summer’s onslaught by terrorists of the so-called Islamic State in Iraq and the Levant (ISIL), Iraq has faced seemingly daunting and persistent challenges, Ján Kubiš, the Special Representative and head of the UN Assistance Mission in Iraq (UNAMI), said, while stressing that nevertheless, there is “hope, opportunities, and notably vision for the way out of the crisis, as expressed in the National Political Agreement.” “The real issue is its implementation,” he said. Iraq’s political process is moving forward, but without the needed vigour, he explained. Praising the Government for “many successes,” he warned that the unity behind the creation of the current Government has not yet fully translated into “unity of purpose or action.” Institutional and legislative reforms remain key to preserving Iraq’s unity, encouraging political reconciliation and to defeating ISIL, Kubiš explained, regretting that the “absence of consensus” has halted such process. Effective partnership between Baghdad and Erbil is equally critical to Iraq’s unity and stability for fighting ISIL, he continued.

He said, “The past period has seen the two sides increasingly expressing disappointment with the implementation of the oil and revenue-sharing agreement signed last year, and was marked by some unilateral steps that work against the interest of both sides and the country as a whole.”

One year after the fall of Mosul, stated the Special Representative, a third of Iraq remains under the control and governance of ISIL.
“The military offensives of the Iraqi security forces, with the critical support of the Popular Mobilization Forces, tribal Sunni volunteers, and the International Coalition, have yet to significantly change the situation on the ground,” he concluded.
He reminded the Council that while Tikrit was liberated in March, Ramadi fell in May. The Government’s ongoing offensive in Anbar aims to reverse that “setback.”

Recalling that the human cost of the conflict remains “far too high”,  Kubiš said that since he last briefedthe Council, UNAMI had recorded a minimum of 1,200 civilians killed and more than 2,000 wounded as a result of armed conflict or terror attacks.

“The Mission continues to receive widespread reports of attacks targeting civilians and civilian infrastructure, extrajudicial killings, abductions, rape and other forms of sexual violence, forced recruitment of children, wanton destruction and looting of civilian property, and denial of fundamental rights and freedoms,” he reported.

Minorities, women and children, Kubiš emphasized, continue to be particularly vulnerable to the “horrors and indignities” inflicted by ISIL.
He said, “The recent terrorist outrage during the Eid holidays near a Shi’ite mosque in Khan Bani Saad in which over 120 civilians were reported killed and some 170 injured is another tragic witness to this.”

“To restore trust and to rebuild unity between the various communities that form the Iraqi people, it is necessary to ensure justice and accountability for violations and abuses, whenever they have taken place and by whomever they were perpetrated, and to eliminate discrimination and marginalization wherever it occurs.”

The humanitarian situation is of the gravest concern, the Special Representative went on to note. “At least 8.2 million, roughly one in four Iraqis need urgent assistance. More than three million people are internally displaced and [UN] partners estimate that a nearly a million more are likely to be displaced by continuing conflict and violence in the months ahead.”

In addition, close to 300,000 refugees, mostly from Syria, have sought safety in the country, he said.

Thanking the donor community for pledges in response to the recent Humanitarian Response Planlaunched in cooperation with the European Union in Brussels on 4 June, Kubiš urged the international community to do more to help desperately vulnerable Iraqi people, as some reports mention that communities and families are being “forced to look to ISIL for life-saving assistance even as UN–sponsored programmes are closing due to lack of funds.”

In conclusion, the Special Representative hoped that the Security Council’s decision later this month on UNAMI’s mandate will provide a “clear guidance” and will establish a re-focused political framework for the UN work in Iraq.