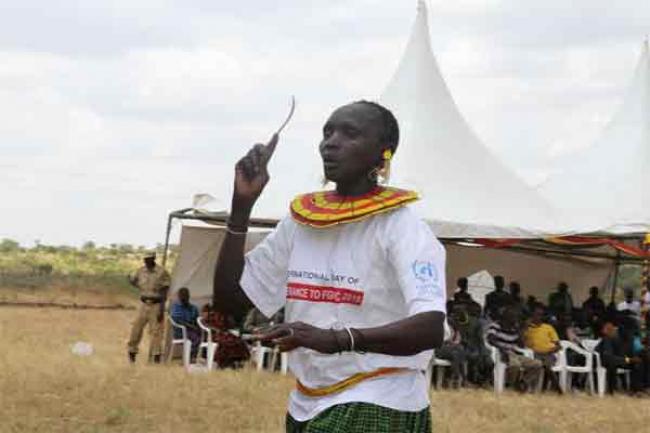 New York, Apr 25 (Just Earth News/IBNS): Despite being forbidden by national and international law, according to a new United Nations report, female genital mutilation shows no sign of abating in Guinea â€“ with more infants and very young girls undergoing the excisions than before.

“Although female genital mutilation appears to be decreasing worldwide, this is not the case in Guinea, where this practice is widespread in every region and among every ethnic, religious and social group,” said UN High Commissioner for Human Rights Zeid Ra’ad Al Hussein in a press release on the report. In recent years, female genital mutilation and/or excision has been inflicted on girls at a younger age. According to a recent study, 69 per cent of women aged 20 to 24 were excised before the age of 10. In Guinea, female genital mutilation is mostly seen as an initiation rite. Groups of girls from multiple families are often excised together, either at home or in camps. However, due to financial constraints and out of fear of legal sanctions, the report shows an increasing trend towards individual excisions, especially when it comes to excising infants or very young girls. Although FGM/E is usually carried out by traditional excision practitioners, there is also a growing trend towards its medicalization – despite a 2010 decree specifically prohibiting public or private health institutions from practicing it.  Zeid noted that after Somalia, Guinea had the highest rate of female genital mutilation in the world, by far surpassing its immediate neighbours – Senegal, with 25 per cent; Côte d’Ivoire, with 38 per cent; and Liberia with 50 per cent. “Female genital mutilation is not only extremely detrimental to women and girls’ health and well-being, it is also an atrocious act of violence. There is no possible justification for this practice – no cultural, religious or medical reason whatsoever,” he said. While most women in countries where the practice is still occurring advocate for its abolition, an increasing number in Guinea support it. A study by the Institut national de la statistique showed that the proportion of women and girls in favour of the practice rose from 65 per cent in 1999 to 76 per cent in 2012.   “Broadly speaking, non-excision of girls is considered dishonourable in Guinean society,” the report said. “Social pressure is such that girls may request excision for fear of being excluded or forced to remain unmarried if they do not suffer the practice.” No repercussions The report acknowledged that the Guinean Government has attempted to prevent and sanction the practice by adopting numerous legislative texts and regulations, and organizing training for judicial, security and medical personnel. However, due to some political and religious leaders’ support, these efforts have thus far not resulted in any decrease of this harmful practice. According to the report, the persistence of the practice is in large part due to the lack of action by the judicial authorities. The report said: “Generally speaking, legal texts prohibiting [female genital mutilation and/or excision are not respected. Thousands of young girls are excised across the country every year, during school vacations, with the full knowledge of judicial personnel, including prosecutors and instructing magistrates.” Excision practitioners are rarely subjected to legal proceedings and no medical professionals have been sanctioned for carrying out female genital mutilation. The report also notes that when justice personnel have tried to address the issue, they have often been subjected to severe pressure and threats. Since 2014, only eight people have been convicted in connection with FGM/E and all of them received suspended sentences and/or small fines. The report warned that Government-, national and international organization-launched awareness campaigns focusing on associated health risks have, paradoxically, seemed to have contributed to the medicalization of the practice rather than to its reduction. The report made several recommendations to the Government, non-governmental organizations and the international community to enhance the fight against female genital mutilation. In particular, it calls on the authorities to ensure the full respect and enforcement of all relevant legislation, with independent and impartial investigation of every suspected case of such excision, and the prosecution of perpetrators and their accomplices.