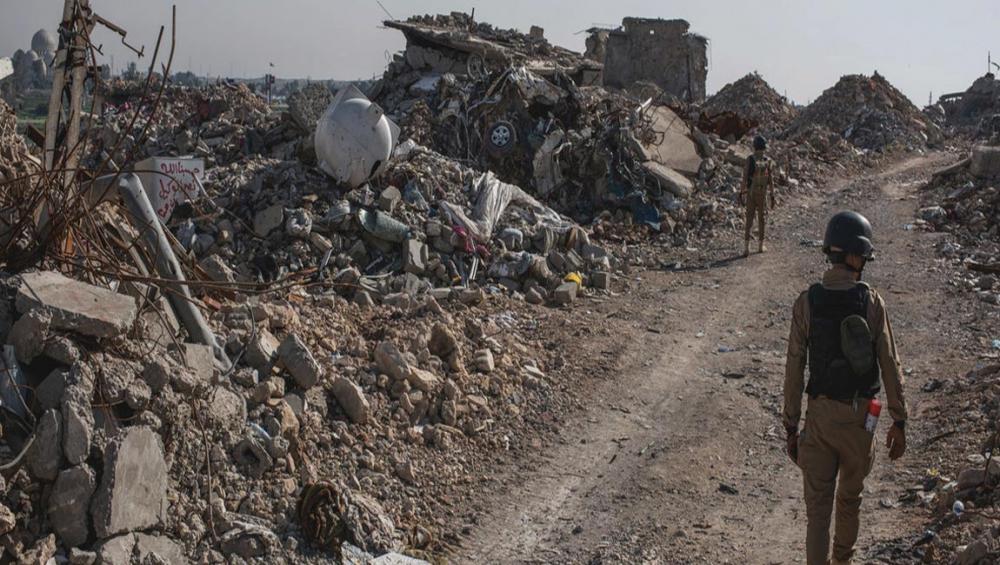 New York: Demining and other explosives clearance operations are ongoing in former ISIL-held areas of Iraq, but the work is painstaking and even more dangerous because of “3D contamination”, the UN Mine Action Service (UNMAS) said on Thursday.

Government-led military campaigns and conflict to retake Iraq’s cities from the extremists, also known as Da’esh, displaced more than 5.8 million people between 2014 and 2017.

Many are still homeless or unable to return home because of what UNMAS calls “significant explosive hazard contamination” linked to airstrikes and improvised explosive devices left behind by ISIL and sometimes even planted on dead fighters.

7.6 million tonnes of debris to make safe, in Mosul alone

In Mosul alone, there is an estimated 7.6 million tonnes of debris from the fighting to make safe, UNMAS believes.

In Mosul, “people want to return home, but the Old City of Western Mosul, you cannot return home to…there is nothing”, said Pehr Lodhammar, Chief of UNMAS in Iraq.

He added: “We are looking at almost two million people who are still displaced outside of their homes, their towns, their villages and our work is to ensure that they can return. We are also looking at over 100,000 houses - of the 100,000 houses destroyed or damaged - potentially with explosives assets in them.”

The update on UNMAS’s work – which complements that of the Government of Iraq – coincides with the launch of an online resource showing the status of mine action in 19 countries and territories, along with current funding status and project proposals.

The 2019 Mine Action Portfolio “constitutes a solid and UN-vetted compilation of requests for assistance put together by affected countries”, according to UNMAS, with total needs amounting to $495 million.

The highest funding requirement is in post-conflict zones including Iraq ($265 million), Afghanistan ($95 million) and Syria ($50 million).

Speaking to journalists in Geneva, UNMAS Director Agnès Marcaillou, underlined the importance of her agency’s mission to ordinary people caught up in conflict.

“Mine action is about suffering, it’s about people waking up at night with nightmares,” she said. “It’s about kids who have their future jeopardized by disabilities; disabilities being mental health or physical disabilities. It’s about a country that cannot get back on its feet, cannot have all the tools they need to revive their economies because their lands are contaminated.”

In Iraq’s Mosul – a former ISIL stronghold – much of the Old City was damaged and destroyed during months of door-to-door fighting to drive out the extremists in 2017.

Countless buildings were also booby-trapped, Lodhammar explained, noting the additional complications caused by having to work in an urban setting with “3D contamination”, rather than a rural location, where mines are usually buried in the ground.

“In 2018 only, we removed close to 17,000 explosive assets,” he said. “2,000 of these - it’s a staggering amount - were improvised explosive devices; 2,000 devices with pressure plate fuse triggers, trip wires, infra-red devices, anti-lift devices, remote control devices - combinations of the five. This also included 782 suicide belts, many of them actually fitted on fallen ISIS fighters in debris, in rubble.”

When clearance operations started 18 months ago, finding unexploded devices was relatively straightforward, as they were scattered on the ground, the UNMAS Iraq chief noted.

Now, the operation is much more complicated, involving the use of camera-carrying drones to assess the dangers, and heavy plant machinery.

“What we are looking at now, is that we have to sift through the debris,” Lodhammar said, noting that it was likely to take at least another eight years before Mosul was cleared of danger to an acceptable level. “We have to sift through the rubble, we have to use mechanical equipment dig out parts of the rubble, spread it out evenly, inspect it and that takes a lot longer time.”

The presence of much larger explosive weapons is also significantly altering the work that UNMAS has to do.

This includes unearthing unexploded bombs dropped by coalition airstrikes against ISIL, which are in many cases buried several metres deep in the earth.

“These are not mines any longer, an anti-personnel mine would have up to 230, 250 grammes of explosives in it,” Lodhammar said. “Now we are looking at 10 to 20 kilos.  People are getting injured yes, but there is also more of a tendency that people are actually getting killed by those devices rather than injured, because of the explosive weight, and the fact that many of them are within a container that is made of from metal, creating fragmentation.”