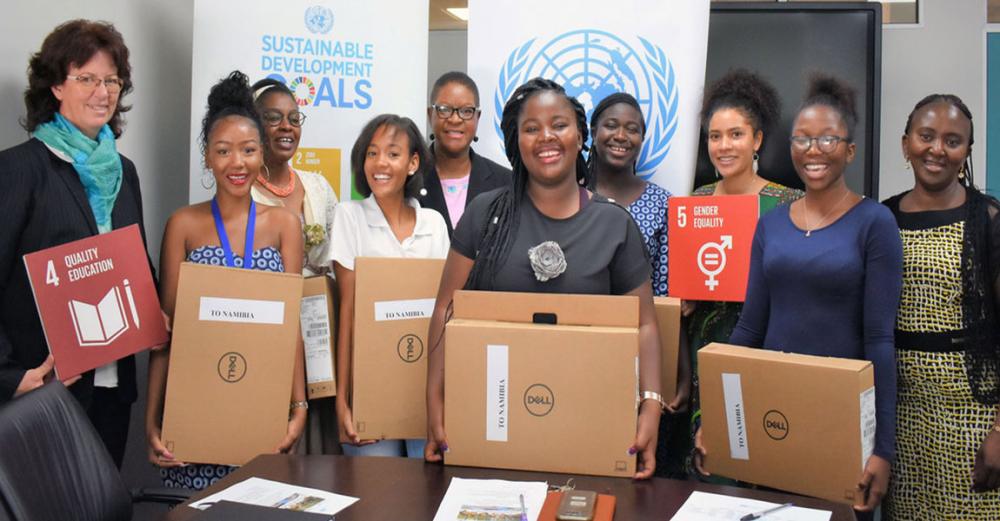 New York : Six young women from Namibia are on the path to a career in the field of information and communications technology (ICT), with the support of the UN office in the country.

They were among a group of 39 counterparts from across the region who participated in the African Girls Can Code camp held in Pretoria, South Africa, last April.

The coders were this week gifted with laptops during a short handover ceremony at UN House in the capital, Windhoek, in partnership with the Ministry of Education, Arts and Culture.

“If young girls and women do not have the training and access to ICTs they will be left behind”, said Rachel Odede, the interim UN Resident Coordinator in Namibia.

“Teaching girls to code is needed to close the gender gap in the technology world, and the overall gender digital divide.”

She encouraged them to continue believing in their dreams because “no matter where you’re from, your dreams are valid.”

Ngurimuje Tjivikua, who was 19 when she attended the coding workshop, spoke about its impact on the group.

“They taught us that we can do anything we want to… I will live to not only be a consumer, but to be a creator”, she said.

Edda Bohn, Deputy Executive Director for Namibia’s Ministry of Education, Arts and Culture, appealed to the girls to reach out to the community, particularly to out-of-school youth.

The African Union (AU) estimates that 90 per cent of future jobs will require ICT skills and that some two million jobs will be created in science, technology, engineering and maths (STEM).

However, women comprise around 28 per cent of those pursuing STEM careers; in sub-Saharan Africa, the average is 30 per cent, according to the UN Educational, Scientific and Cultural Organization (UNESCO).

African Girls Can Code aims to provide 2,000 girls from across the continent with digital literacy skills, including coding, programming and leadership skills.

Established in 2018, the four-year programme is jointly implemented by the AU, the International Telecommunications Union (ITU), and UN Women.

Photo caption and credit
UN Namibia
Namibian high school girls, who participated in the 'African Girls Can Code' programme, pay a visit to UN House in Windhoek to start their journey of putting their coding skills into action.