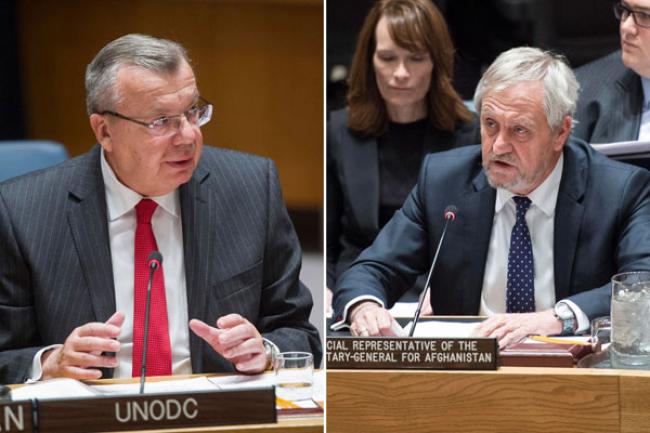 New York, Dec 19 (JEN) As Afghanistan builds upon recent political developments, including the formation of a unity government, the countryâ€™s authorities and the international community must not ignore the immense challenges that lie ahead, from simmering insecurity to an escalating drug crisis, two senior United Nations officials declared on Thursday during their briefing to the Security Council.

“The upsurge in insurgent violence and concomitant increase in civilian casualties, the deepening budgetary shortfall, and delays in critical government appointments remind us that tackling these challenges will require collective determination and renewed focus,” Special Representative of the Secretary-General and head of the UN Assistance Mission in Afghanistan (UNAMA), Nicholas Haysom told the 15-member Council. “The Afghan people deserve nothing less.” In September, presidential candidates, Abdullah Abdullah and Ashraf Ghani Ahmadzai, signed an agreement establishing a national unity Government, resolving months of political uncertainty and bringing an end to fears that the country was on the cusp of renewed internal strife. “The agreement between the two candidates ended a political crisis that, if unresolved, would have at best left the country divided and at worst, could have reignited past cycles of conflicts,” said  Haysom, who urged Afghanistan’s political leadership to now conclude its process for the appointment and approval of other senior Government officials. “A diverse, equitable and merit-based cabinet can strengthen the population’s confidence that Government intends to deliver on its promises.” While the Government is clearing its first political hurdle, continued the UNAMA envoy, a broad range of critical issues still need to be addressed, including reforms focusing on public accountability and transparency as well as women’s rights, an end to ongoing budgetary difficulties, and full-fledged efforts to combat corruption. Above all,  Haysom noted, Afghanistan would struggle to build upon the devastation of the past if its issues of festering insecurity remained unresolved. As of 30 November, UNAMA, in fact, recorded more civilian deaths and injuries in Afghanistan than any other full year since 2008 with civilian casualties increasing 19 per cent overall from last year. “The recent increase in security incidents is a cause for concern. It is too early to assess whether this surge is timed to coincide with the withdrawal of international military forces, or will become the new normal,” he stated. “Stability and prosperity will, quite simply, not be achieved in the absence of a sustainable peace.” Among the numerous threats contributing to Afghanistan’s overall precariousness has been the precipitous rise in the illicit drug trade, added Yury Fedotov, the Executive Director of the UN Office on Drugs and Crime (UNODC), in his statement to the Council. “All in all, the illicit opium economy and related criminality, money laundering and corruption continue to threaten security, social and economic development, governance and health in Afghanistan, the region and beyond,” he said. In its 2014 Afghanistan Opium Survey, released last month, the UNODC reported that opium cultivation and production in the country had reached record levels this year, with the former increasing seven per cent to 224,000 hectares and production levels potentially climbing as much as 17 per cent. Afghanistan produces some 90 per cent of the world’s illicit opiates. Hilmand province, in the south, remains the country’s major opium cultivating area, followed by Kandahar, Farah and Nangarhar. Meanwhile, the annual survey found that total eradication decreased by 63 per cent to two thousand, 692 hectares, as governor-led poppy eradication campaigns were less active in all regions, amid an unfavourable security situation. Detailing the three priorities which he said would help the country and the international community move forward in the fight against Afghanistan’s drug trade,  Fedotov cited alternative development of the agricultural sector, improved prevention, treatment and rehabilitation services, and enhanced regional and inter-regional cooperation in tackling drug trafficking as being key. “We must do more to ensure that action to weaken the stranglehold of drugs and crime goes hand in hand with efforts to strengthen the licit economy,” he told the members of the Council. “The lessons of the past decade strongly suggest that counter-narcotics must be fully integrated in development and security strategies, and delivered as part of unified assistance.”

UNODC's Yury Fedotov (left) and UNAMA's Nicholas Haysom address the Security Council on the situation in Afghanistan and its implications for international peace and security. UN Photo/Amanda Voisard/Mark Garten