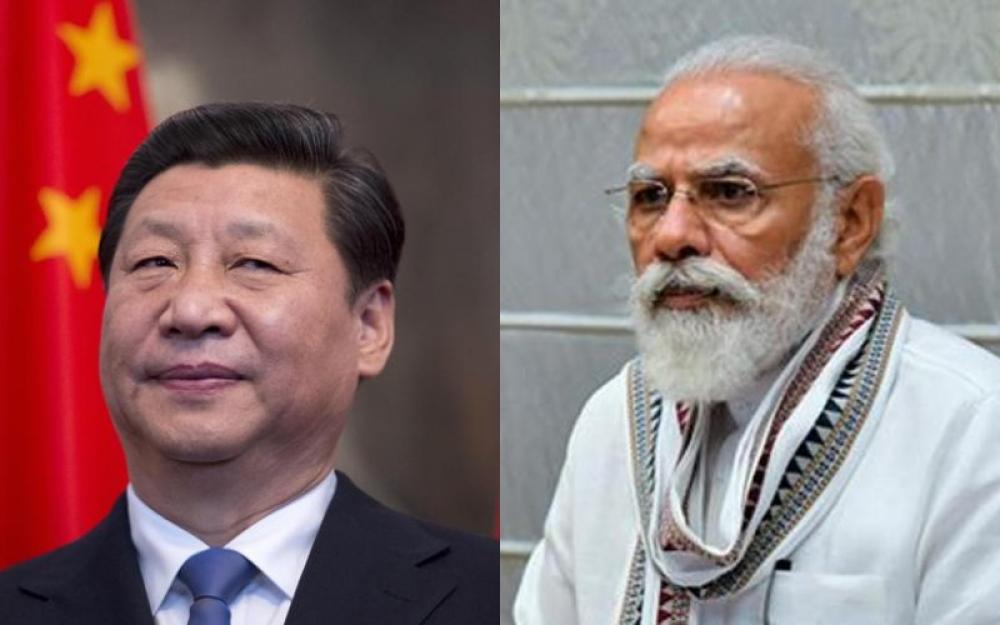 India must consolidate its diplomatic and economic ties with China's adversaries like Taiwan, Philippines, Indonesia and Vietnam to target Beijing and counter its narrative, said experts during a webiner held recently.

Exploring possible military options, Singvi said, “The military option is most important to generate fear and keep the balance. Let us ensure to keep the adversary far at the cost that we can afford. Therefore, maintain the balance. I am not thinking of the option in the same tone that we take on Pakistan.

He said India must strengthen its military budget which has fallen 1.5 percent of the country's total budget.

He further suggested that India must activate and complete a landing ground on Daulat Beg Oldi road. Another major need is to strengthen the fragile and incoherent infrastructure of Arunachal Pradesh.

"China appears to be something that has gone largely unnoticed by the Indian army. We need to strengthen the drone armoury as we lag behind them in the UAV technologies and have not yet diverted our attention towards it," he said.

Exploring possible diplomatic options for India, he said, “The ASEAN, The Quad, Malabar, D-10 -- these alliances would be of great use in the China equation. 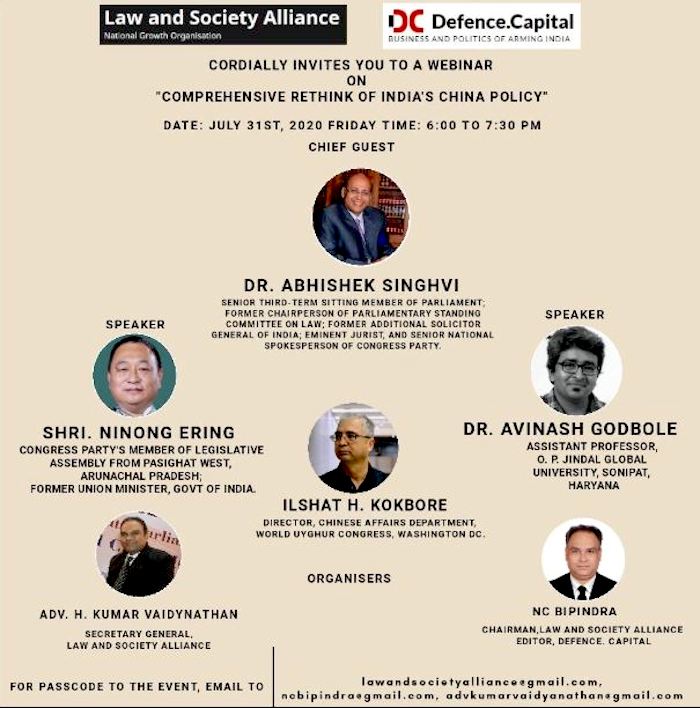 "I think to the extent that we have some asymmetry with China on land and traditional defense forces. That asymmetry is much less on our water and ocean frontier. The joint exercises, policing, patrolling, all the ups and downs in the Indian Ocean gives superiority to India when we combine with all these entities. Quad is a very important formation, we are now reformulating and reconfiguring and it should be taken towards consistency.

"India should also focus on the two Ts: Tibet and Taiwan. We should work towards leveraging and exploiting our relations with these two countries.

"We also must unhesitatingly enhance diplomatic relations with Taiwan. We have increased our trade from 66 million to six billion with Taiwan recently.

"The Government of India can have a simple rule that violent and aggressive statements on China would be issued here. not by the government, but by organisations. These persecuted communities should be given a place in India. People like Richard Gere and Dolkun Isa should be given their due place. The continuance of artificial restrictions on these activities are niceties that China itself exploits," he said.

"We are also underestimating countries like the Philippines, Indonesia, and Vietnam who have conflicts with China and are ready to take on it.  Vietnam had a Spratly islands conflict with China, besides multiple other conflicts in which it has shown its resolve.

Several parliamentary groups are coming up on China and communities persecuted by it. ‘Friends of Uyghur’ was recently founded in the European Parliament in 2017.

There are already parliamentary support groups in Tibet. Most recently, lawmakers from democratic nations have come together to constitute the Inter-Parliamentary Alliance on China against expansionist China. Currently, more than one hundred MPs have joined the Alliance. India should join it or at least have some consultative status to it, he said.

On the policy options on the economic front, Singhvi argued that India can check Chinese investments and exports to India. However, it need not be a blanket approach, but a calibrated one. There are Bilateral Investment Treaties. "India has entered into a Bilateral Investment Treaty (BIT) with China. All of them have established derogation. By using the provision of the Essential Security Interest (ESI) can tell that we are doing it in the national security favour. The BIT gives us the power to do it," he said.

"The need of the hour is of judiciously crafted focus and targeted mix of import substitution, discriminatory tariff, steep anti-dumping duties, and arbitration in certain areas. And let me remind you - these are not WTO breaches. These are not foul practices. There are judgments in WTO that do not terms these are WTO violations. We need to be more adventurous. We have nothing to lose but our inactiveness," he said.

Singhvi concluded by saying, “Today China is not the problem, but the Chinese Communist Party is. More than the party, Xi Jinping is the problem.”

Uighur leader Ilshat H. Kokbore highlighted the human rights abuses by China on the minority Uighur community in East Turkestan. He said Beijing was after him and when they couldn't get him, they tortured the family and killed several people.

"Today is our EId-Ul-Adha and I could not call my mother. She is 82. It's not only my story, but the story of millions of Uighurs. It is a genocide," he said.

Raising questions on the Turkic world, he highlighted that the Turkic countries have not paid attention to Uighurs' plight and have not done much. Pakistan is the worst country. When Imran Khan was confronted by the journalist, he ignored and said that he does not know about the Uighur issues.

He further said that China’s principle of one country, two systems have been collapsing. Kokbore urged India to play a more active role and allow its vast Muslim population to cheer for Uighur. He said India's democratc values will instill self belief in the oppressed community.

Raising the issue of stapled visas, Ninong Ering said that in 2016 he was asked to go to China and responded that he needed to get a stapled visa, to which he declined. He took up this issue earlier with PM Dr. Manmohan Singh and now with PM Modi.

Talking about other experiences, he said, “last year, in Tuting, the Chinese troops had an incursion in Bishing village. Our brave people came out with hammers and daos and chased away Chinese people when they were constructing roads. There was a big hue and cry. Chinese vehicles and bulldozers were captured and destroyed. Under the slogans of Jai Hind and Bharatmata ki Jai, the locals took over the vehicles of the Chinese army.”

China is making dams all along the LAC and making the situation dangerous for us. I raised the issue that China is constructing a 1000 km dam through Xinjiang and Southeast China deserts. The Zhangbo dam on the Brahmaputra is one of the biggest dams. It can be used as a threat in the future. There are around four dams on the Brahmaputra on the Chinese side. If China releases waters from all these dams, it can prove to be ‘water bombs’ and the entire Arunachal, Assam and even Bangladesh could be submerged.

"I have also written on the coronavirus issue to the PM to take on China for the coronavirus pandemic. China plans to win the war without shooting any bullet. I have also written a letter to the PM when the apps were banned as they were spying. Huawei is a big threat to the privacy of the citizens and it is a tool of spying in India. Ren Zhengfei founded the company who was a soldier of the PLA”, he added.

Tawang is one of the oldest monasteries of Buddhism - which Chinese claim to be South Tibet. In 1949, when the 14th Dalai Lama had to come out from Tibet, he went to Tawang and settled for sometime. If the Chinese appoint a new Dalai Lama from China, it could be problematic. Let us ensure that the 15th Dalai Lama is born in India - either in Tawang, Namsai, and Bomdila in India and then we can say that the Dalai Lama. We need to ensure this by any means.

Avinash Godbole highlighted that with Xi Jinping’s rise to power, the press conferences by the Premier and the Foreign minister of China are attacking - which need to be noted. China has started to believe that it is going to be at the forefront of the world, leading by technology.

A new kind of alliance has emerged. The new meme war between China and Thailand led to the formation of the China vs the Milk Tea Alliance against China. Can we take the idea of the Milk Tea Alliance between India and South Southeast Asia to take on China? The ‘Milk Tea Alliance’ is an informal term coined by social media users because in the region, tea is consumed in many nations with milk, with the exception of China.

Godbole also highlighted the need to strengthen our strategic communication. “We have to have a similarity of tone in different locations to send a coherent strong message. The best foreign policy is 10 percent economic growth. India should try to bring the marginalised communities in the economic mainstream”, he concluded.