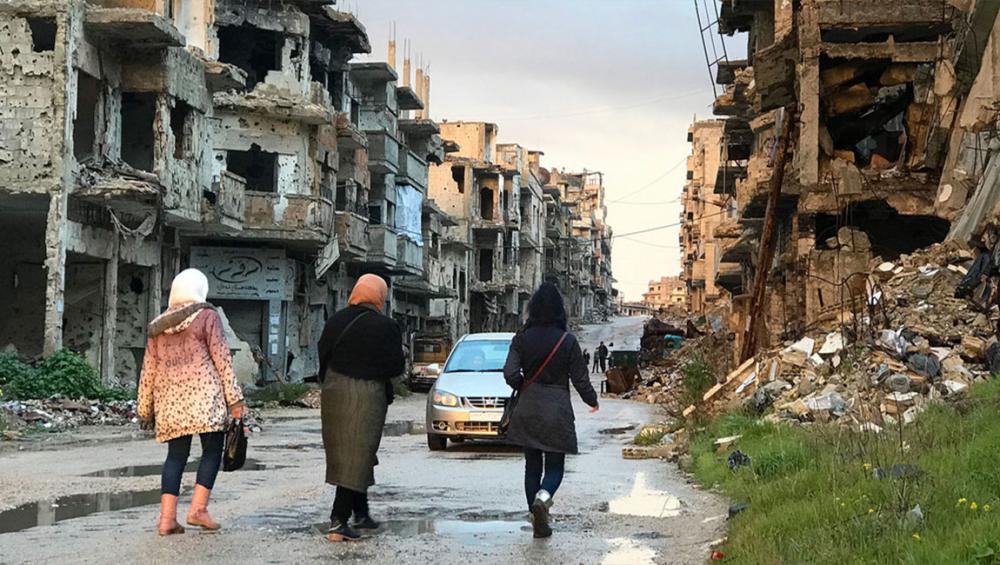 New York, Aug 8 (JEN): The Security Council has “utterly failed Syrian detainees and their families”, Amina Khoulani, Co-founder of Families for Freedom, told the Security Council on Wednesday, during a meeting focussed on those who have been jailed or gone missing across Syria, during years of brutal conflict.

In a rare opportunity for the Council to hear directly from family members of people forcibly disappeared, Ms. Khoulani spelled out: “It is your responsibility to protect Syrians from a system that kills, tortures and illegally detains its own citizens”.

Speaking on behalf of the women-led movement, launched in 2017 by families whose loved ones had been detained and disappeared, she painted a picture of sick, injured or dying people, many enduring daily barbaric torture with some scheduled for execution, saying, “hardly any of them will have had a fair trial”.

Acknowledging that she was not telling them “anything new”, Ms. Khoulani underscored that “this Council can save their lives if it chooses to act today”.

And yet in spite of the reports and information on detention, forced disappearances and torture, numbers continue to rise, including among those who have tried to return.

“You have let vetoes and excuses get in the way of what is right and just”, she said, adding that it was the Council’s responsibility to find a way to “end impunity and stop this horror”.

Recalling that she herself was imprisoned for six months, for “peaceful activism” and her husband detained for two and a half years, she asserted, “we were both lucky to survive, but many others were not as lucky”.

“I don’t have enough words to describe how it felt” when two of her family members were sentenced to death “on the same day at the same minute on 15 January 2013”, she told the Council.

Today, around 100,000 Syrian men, women and children remain missing, “the majority detained by the Syrian regime, but extremist and opposition groups are also responsible for the disappearances”, she said.

Khoulani implored the members to “make the issue of detention and forced disappearance in Syria a priority”, urging them to adopt a resolution pressuring the regime and armed opposition groups for the names and whereabouts for everyone in detention and to allow humanitarian organizations to visit the detention centres.

Flagging that the crimes of detention and forced disappearance have for decades “plagued” Syria, Khoulani said that they have become “epidemic” over the last eight years and shattered millions of lives forever.  “Let those of us whose loved ones were executed or tortured to death, know the location of their burial sites so we can grieve them properly”, she said.

“The first step toward sustainable peace and justice is truth, an end to arbitrary detention and forced disappearance and the release of thousands of civilians arbitrarily detained and denied their freedom” she concluded.

A continued lack of access to detention sites and people being held in Syria has left the United Nations with “no official statistics on those detained, abducted or missing”, UN political affairs chief Rosemary A. DiCarlo told the Council in her briefing.

“While the UN is not able to verify, reports suggest that more than 100,000 people have so far been detained, abducted, disappeared or went missing, largely, but not only, by the Syrian Government,” she stated.

Adding that many families have no information on the fate of their loved ones, she underscored that detainees, including women and children, are held “without due process or access to legal representation or their families”.

Moreover, detention cites are not accessible to the UN or international monitors; hospital or burial site records are not public; and some families have paid enormous sums of money to obtain information on loved ones, often in vain.

“Deaths in detention have continued to occur, many allegedly as a result of torture, neglect or humane conditions”, she continued, pointing out that this is compounded by the difficulty of obtaining death certificates or remains, which, if acquired, hide the real causes of death.

Aside from being victims themselves, women also risk losing their homes, land and property rights in Syria when, after their husbands or male relatives disappear, they cannot explain their whereabouts and lack legal documentation or a death certificate.

“Many women under these circumstances carry the heavy burden of sustaining their entire families”, Ms. DiCarlo elaborated. “For refugees or those internally displaced, these challenges are multiplied”.

The UN political chief cited photos of nearly “7,000 dead bodies bearing marks of torture” that were smuggled out of Syria by a military defector and made public in 2014, saying they were “prominent evidence of torture and ill-treatment of detainees in Government detention centers”.

“Justice and accountability for these abuses must be ensured, regardless of the perpetrators”, she stressed, adding the UN is concerned that thousands of foreign nationals, many relatives of alleged ISIL members, are currently being detained at Al Hol camp. “We call on Member States to ensure that their nationals are repatriated for the purposes of prosecution, rehabilitation and/or reintegration, as appropriate, and in line with international law and standards”.

She said that they must “collect, protect, and manage” detainee, abductee and missing persons data; establish an information management mechanism; identify and return remains to their families; and provide a list of “all places in which persons are being detained and arrange for immediate access” by a neutral third party. Pointed to various Security Council resolutions, Ms. DiCarla called for the release of those arbitrarily detained. “The parties must fulfill their obligations under international law, to unilaterally release all arbitrarily detained or abducted, and most urgently, women, children, the sick and elderly”, she spelled out.

“Accountability for serious violations of international humanitarian law and human rights is central to achieving and maintaining durable peace in Syria.”, DiCarlo emphasized. “All parties to the conflict, in particular the Syrian government, must cooperate fully with the International, Impartial and Independent Mechanism and the Commission of Inquiry”.